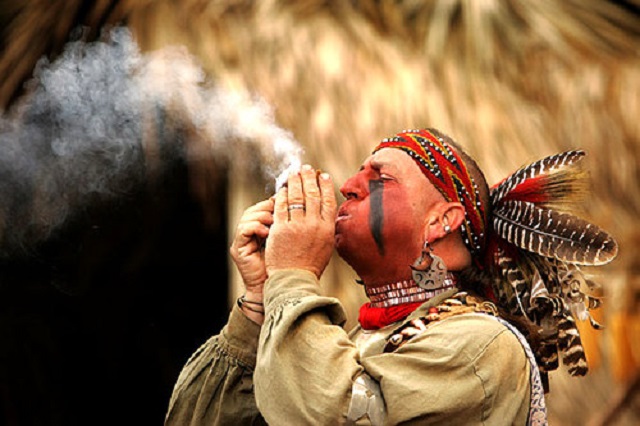 DANVILLE – Just a short drive from Cullman you’ll find a vastly different culture celebrated each year at the Oakville Indian Mounds Park and Museum’s Multicultural Indian Event, now in its 30th year. The annual occasion brings together the area’s rich American Indian culture and traditions, skills and trades of the settlers, recreating the period in Alabama’s history when they lived together in peace among the hills that surround us. The event will take place this weekend, May 20, from 10 a.m.-5 p.m.

Museum Cultural Resource Specialist, Anna Lynn Mullican, invites everyone to come to the free event. “There is a $2 charge for parking, but the admission is free,” she explained. “The Oakville Indian Mounds Education Center hosts the event celebrating the diversity of the southeastern native peoples from our area. This is a student-led project sponsored by our Native American Student Club members. The park will be filled with living history demonstrations, free hands-on children's activities, flute and drum demonstrations, live bluegrass and gospel music, and several $1 activities including canoe rides, wagon rides and face painting. The $2 donation for parking proceeds goes to (the) Oakville Indian Mounds Education Center.”

Well-known musician, Robert Montgomery, will be heading up the bluegrass groups in the amphitheater.

“This year we are focusing on native foods and the way in which food was prepared,” Mullican explained. “There will be one true Native American who will demonstrate the art of frying bread, as well as the usual festival fare of funnel cakes, Hawaiian Ice, lemonade and many other food vendors, as well as crafters and living history scenes. All of the enactors welcome questions so don’t be shy,” said Mullican. “This celebration includes the history of this part of north Alabama; the people you see have strong ties to the heritage that we share. Much of what you see will demonstrate the cooking, living and survival skills of the people who inhabited the foothills of what is now the Bankhead National Forest centuries ago. Many of the enactors are retired educators who love teaching the old culture to younger generations. All are highly educated and specialists in their fields.”

Native American Jim Sawgrass, of the Muscogee Creek Indian Tribe of Florida, will give intensive sessions on fishing, hunting and cooking and share some of his techniques with the audience.

Many other crafts and a wide variety of living history booths will be on display.

In 1991 Oakville Indian Mounds Park came about with the initial purchase of 26.7 acres of land by the Lawrence County Commission and the Indian Youth Leadership Project in Lawrence County, sponsored by the Alabama Indian Affairs Commission through a grant from the Appalachian Regional Commission. Congressman Tom Bevill was instrumental in the securing of funds.

The park was dedicated on August 24, 1991 with approximately 3,000 people in attendance.

During the initial preparation of the land for the Park from 1990 – 1992, archaeologists from Mound State Monument with the University of Alabama conducted an intensive study in the immediate vicinity of the Oakville Indian Mounds Park, identifying some 100 archaeological sites at Oakville and surrounding areas.

During 1992, construction of the Indian village began, an archeological survey was conducted, and the museum building plans and specifications were completed and accepted by the Alabama Department of Economic and Community Affairs, which funded $126,400 from the Land and Water Conservation Fund for the shell-in of the museum and office building. The Lawrence County Board of Education provided all additional funds for completion of the museum and office building. The museum project was finished in 1995. Since 2002, Oakville Indian Mounds Park has steadily grown into an 83-acre complex through a series of land purchases.

According to te museum's website, the Oakville Ceremonial Woodland Mound is the largest Indian mound at Oakville, covering some 1.5 acres of land and rising some 27 feet high. Believed to be a cultural center during the Woodland Period of north Alabama, the Oakville Ceremonial Woodland Mound is the largest Woodland Mound in the State of Alabama. The mound is estimated to have been built during the Woodland Period which covered a time span from 1,000 B.C. to 1,000 A.D. The mound was made by one basketful of dirt at a time. Stone spades were used to dig the soil from borrow pits to transfer by baskets to the mound site. The probable burrow pit was the depression that now contains Oakville Pond, the body of water northeast of the mound. The only known modifications to the Oakville Ceremonial Woodland Mound are from cutting off of a lower portion of the sides to provide more area for farming. In addition, the top of the mound has been repeatedly plowed which has caused the top edge of the mound to get steeper and probably flatter. The steps on the side of the mound were placed in an old roadbed leading to the top of the mound. The Oakville area was considered a religious center and social complex of the Middle Woodland Indian people with outlying villages and farms. Additional Copena mounds located nearby support the complex social center theory. The Copena people lived during this period from 1,000 B.C. to 1,000 A.D. Their society did not extend much farther south than the Warrior Mountains that can be seen to the south of the Ceremonial Mound or north to the Hogohogee (Tennessee) River or “River of Cherokees.”

Inside the museum, you will find a hand-carved statue of Sequoya, crafted by noted Lawrence County woodworker, David Goodlett. The statue was donated to the museum.  Commanding pride of place in the center of the museum, is the spectacular wooden carving of the Cherokee legend, Sequoyah. Goodlett is known throughout Alabama art circles for his American Indian creations and as the founder of the state’s first woodcarving educational programs. The statue of Sequoyah is the largest piece created by Goodlett. It stands 12 feet high and is carved from a huge white-oak tree trunk. It took Goodlett almost two years to complete the impressive statue of Sequoyah.

Funny Things from Yesterday: It scared his mule