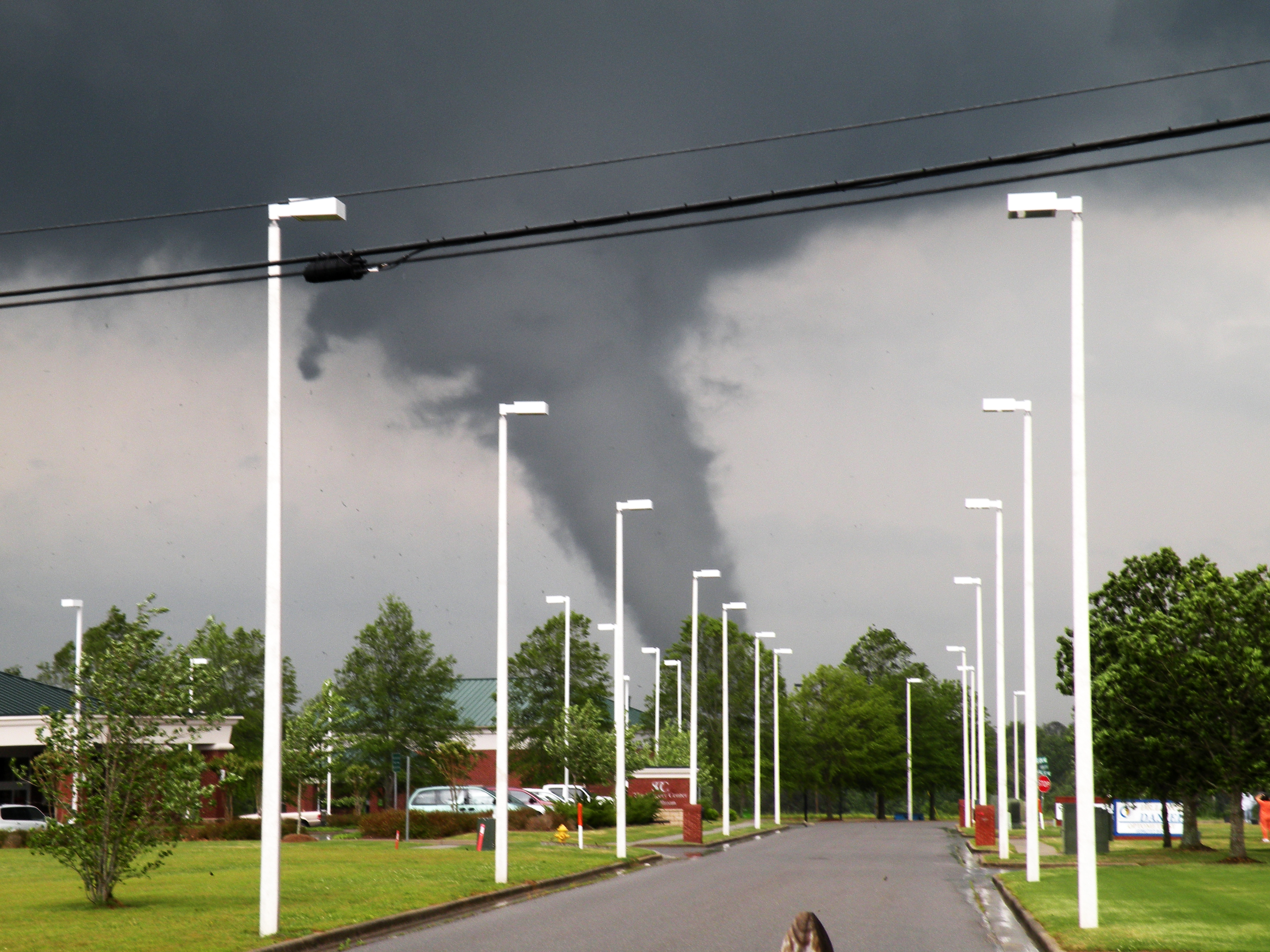 Tornado as it passed near Highway 157 after leaving city of Cullman (Credit: Bill Piper)

At least four tornadoes struck Cullman County on April 27, 2011. The tornadoes were part of the 2011 Super Outbreak, a generational tornado outbreak that affected large portions of the U.S. and Canada from April 25-28. The outbreak caused more than 300 fatalities- more than 230 in Alabama alone- and is considered one of the costliest natural disasters in U.S. history, as well as one of the deadliest tornado outbreaks.  More than $1 billion worth of damage was caused total. The Alabama tornadoes included the EF5 tornado that struck Phil Campbell and Hackleburg, the EF4 that struck Tuscaloosa and Birmingham, and the four tornadoes that hit Cullman County. In all, 62 tornadoes touched down in Alabama on April 27.

The first tornado to affect Cullman occurred on the morning of April 27. While the tornadoes that formed on the afternoon of April 27 were the deadliest, there was also a morning round of severe weather that included tornadoes. One of these tornadoes was an EF2 that moved through southern Cullman County in the early morning hours of April 27, tracking from near Cold Springs through Hanceville to Holly Pond. Numerous trees and power lines were downed, and several chicken houses and outbuildings were damaged, but some of the most serious damage occurred in Hanceville. Wallace State College sustained roof, window and structural damage to several buildings, along with damaged power poles, and the roof of Hanceville High School’s gym was partly blown off. Numerous trees were toppled onto houses. Damage was also reported in Holly Pond. In addition to tornado damage, many structures suffered damage from straight-line wind gusts.  Many power outages were reported, and at least one fatality occurred in Cullman County as a result of this storm.

The second tornado to affect Cullman on April 27 was the destructive multi-vortex EF4 that moved through downtown Cullman on the afternoon of April 27. The tornado touched down near Smith Lake around 2:40 p.m., a touchdown that was witnessed live on ABC 33/40’s SkyCam, and caused damage near Grandview and Crane Hill before tracking towards the city of Cullman. The tornado reached the city of Cullman around 3 p.m., first destroying a city fire station and damaging the Cullman emergency ambulance service building, the Shell Station on Main Avenue and roof of the courthouse before reaching the downtown business district.

A large number of buildings in downtown Cullman- particularly around Fourth and Fifth Streets- were damaged, with many being completely destroyed. The Busy Bee Café, Cullman Florist, Little Bit of Everything and Doyle Real Estate were leveled, and Fairview Florist, Vincent’s Furniture, and Pam’s Bookshelf (where the Red Door Café is located now) sustained heavy damage. Cullman’s NOAA Weather Radio transmitter and WKUL Radio Tower were both downed, as were numerous trees and power lines. First Baptist Church and First United Methodist Church were both damaged and Christ Lutheran Church and Eastside Baptist Church were leveled. Many residences in and around downtown Cullman received damage or were destroyed.

After leaving the city, the tornado tracked toward Fairview and Simcoe, where it continued to cause damage. Many trees were downed or debarked, and many homes were destroyed or damaged in this area. The tornado remained on the ground into Marshall County, where it caused intense damage as well as fatalities before finally lifting. In addition to damage, widespread power outages were reported in Cullman County as a result of this storm, with some people being without a power for a week or longer. Two fatalities were reported in Cullman County, and many injuries were reported.

The third tornado to affect Cullman County on April 27 was the EF4 that tracked from Pickens County through Walker and Blount before ending in Marshall County, and that caused significant damage in Cordova.   While this tornado was primarily outside of Cullman County, it briefly passed through extreme southern Cullman County near Arkadelphia. Numerous trees were downed, damaged or debarked, and many homes (including at least one mobile home) were either damaged or completely destroyed.

The fourth and final tornado to hit Cullman County on April 27 was a brief EF0 tornado that formed near West Point on the night of April 27. The tornado caused mostly tree damage along with some light structural damage before lifting.