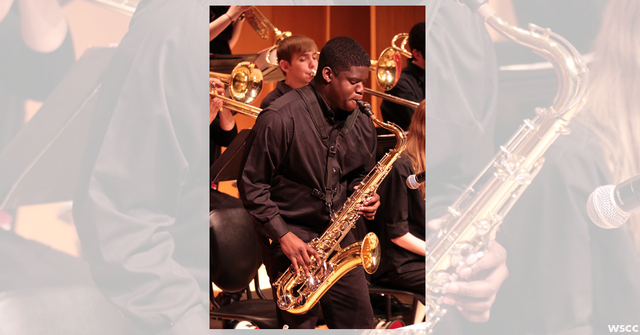 Each year, the concert is the culmination of a year of hard work and effort by the students. Many of the student musicians play in both the Jazz and Concert bands.

The Wallace State Jazz Band recently added its name once again to the wall of the Alabama Jazz Hall of Fame, earning the designation of a Band of Distinction during its annual Student Jazz Band Festival held at The Carver Theatre in Birmingham on April 22. The band also earned the honor in 2006 and 2008.

Concert goers can look forward to listening to the Concert Band perform "Hungarian Dance No. 5" by Brahms, "March" from "Carmen," "Othello" from the Shakespeare play and the hymn "Abide With Me."

The Jazz Band will perform "That’s It," "Cold Duck Time," "If I Loved You" and "Jumping at the Wood Side."

Check out this preview to get in the mood!

Admission is free and the concert is open to the public.

Image: Nick Watford is featured during a performance of the Wallace State Jazz Band at Preview Day 2016 for the Fine and Performing Arts program at Wallace State Community College.