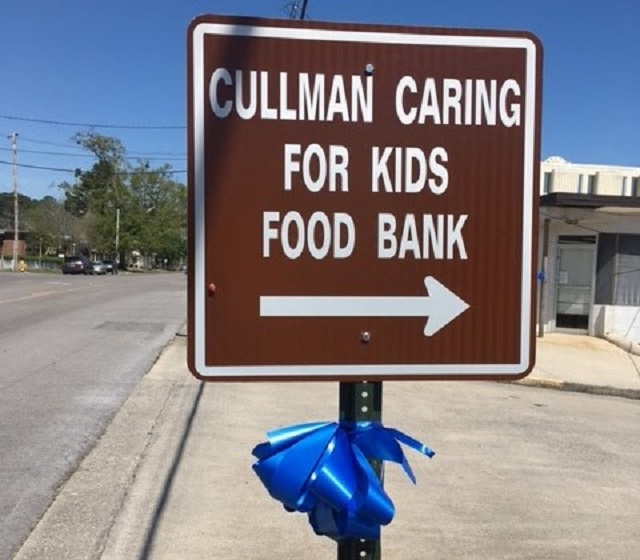 The blue ribbons on signs, light posts and cars around town represent the bruises suffered by victims of child abuse.

CULLMAN – It was a somber gathering this week as Javon Daniel and Cullman Caring for Kids (CCK) held a special ceremony for Child Abuse Awareness Month, remembering the 26 children who died last year in Alabama as a result of child abuse or neglect, and showing their commitment to those who still suffer.

The memorial began with a gathering at the Cullman County Courthouse and proceeded to the top of the parking deck at Cullman Saving Bank, where 40 balloons were released.  In addition to 26 white balloons for those who died last year, blue balloons represented an unknown number of ongoing victims.

According to Daniel, “There were 26 confirmed deaths in 2016, and those confirmations come from the Children Death Review Committee in Montgomery.  That means that all the court action was settled, and that child died as a result of child abuse or neglect.”

To mark April as Child Abuse Awareness Month, the Cullman County Commission, Mayor Woody Jacobs of Cullman and Mayor Kenneth Nail of Hanceville issued proclamations; and Cullman City Parks and Recreation colored the water in the Depot Park fountain blue.  Crosses and flowers for the victims stand in the park, and CCK has been distributing blue bows and ribbons all over town; the color symbolizes the bruises suffered by victims of abuse.

“There’s not a day goes by that there’s not a child abused in our community,” said Daniel. “In 2016, there were 999 reports of child abuse or neglect made to DHR in this county.  The year before, it was 840.”

Daniel says the number of abused and neglected children in Cullman County has risen each of the 15 years he has worked with CCK.  He also notes that, statistically, as few as 10 percent of all acts of abuse and neglect are reported, so the actual numbers are much higher.  Some child suffers an act of abuse or neglect every 10 seconds in the United States, including acts of sexual abuse that occur every six minutes.

For more information, or to help, visit www.cullmancaringforkids.com or on Facebook www.facebook.com/CullmanCaringForKids.