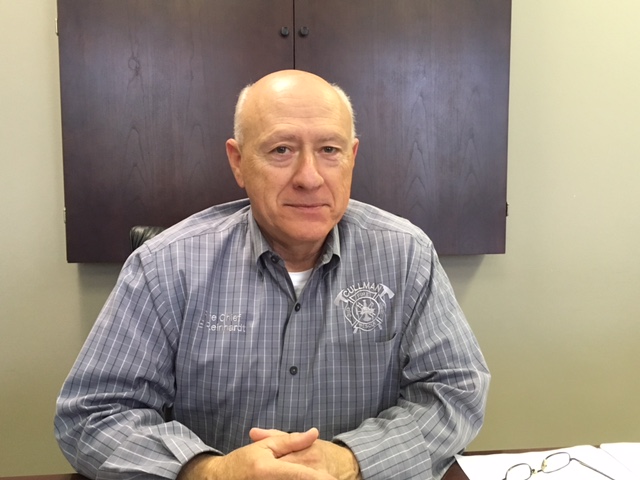 CULLMAN – When firefighters respond to a call, especially in town, they run a gauntlet of other vehicles in trucks that aren’t designed to be nimble.  They have to be both safe and fast.  In addition to extensive training and practice, Cullman Fire Rescue (CFR) now has another tool in its chest.

CFR engines (the big trucks) carry traffic preemption controls (TPCs) that automatically change red lights ahead of them to green, keeping traffic flowing out front and preventing the risks of driving through red lights.  It doesn’t work on every light; receivers are attached to specific lights on the routes most often traveled by fire trucks.

The Tribune sat down with CFR Chief Edward Reinhardt to get more information about how the devices work.

“The device on the truck will signal the light,” said Reinhardt, “and the light will pick it up and give us a green light, and turn the other three directions red.  It’s set up on the truck to where, any time we turn the emergency lights on, it comes on at that point.  Once you set the parking brake or put the truck in park, it goes back off.”

The light change is not instant.  When an approaching truck activates the TPC, the green light will cycle through yellow to red to give motorists time to stop.

TPCs are not just for straight routes.  The devices are keyed to the trucks’ turn signals, as well.

According to Reinhardt, “If we turn on a left turn signal, and there’s a turn lane there, it will give us that turn.  And as we turn right or left, the next light picks it up.”

The TPC not only changes the light immediately in front of a truck, but also the lights ahead along the truck’s route.

Reinhardt explained, “As you go down through town, the traffic backs up from light to light.  If it just turns the light that you’re at, then the next light is red; you just keep backing up.  The idea is to get as many lights as you can on a main throughway.  When you get one light, it gets the next light, and the traffic in front of you just keeps moving on through town and out of your way.  It actually makes it safer for everybody, and for us too.  It also cuts down on our response time, since we’re not having to maneuver in and out of the traffic.”

Right now, 13 lights in Cullman have receivers: those closest to the stations, along Highway 31 and Highway 278, and on the routes from stations to those main thoroughfares.  With recent city council approval, the CFR will soon add eight more lights; and more will come in the future.

“Eventually, we’ll have most all of the lights in town,” said Reinhardt.

Law enforcement agencies and ambulance services can also use TPCs, but for now in Cullman, only the fire department has them.  There, they are used only on the engines and rescue trucks.  Reinhardt was clear that no staff or personal vehicles will carry the devices.