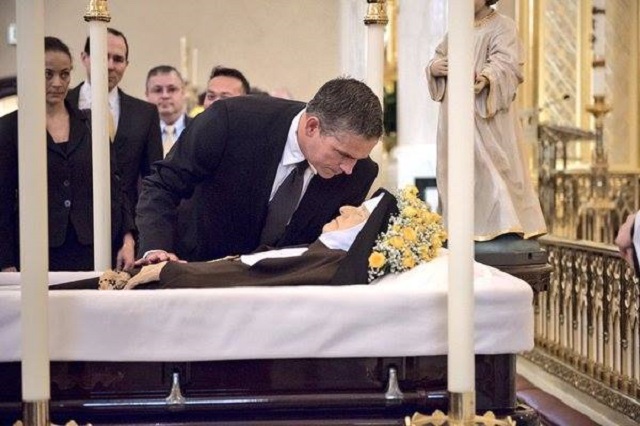 Actor Jim Caviezel, who played Jesus in "The Passion of the Christ," pays his respects to Mother Angelica. (Photo: EWTN)

HANCEVILLE – She was born Rita Rizzo in 1923, but very few people know that name today.  In 1944 she became Sister Mary Angelica of the Annunciation, but she will ever be known by her final title: Mother Angelica.

Mother Angelica was born and raised in Ohio, and there she took her vows as a member of the Poor Clares of Perpetual Adoration, a female Franciscan monastic order dedicated to the worship of Jesus Christ in the Eucharist (for Catholics, the “Most Blessed Sacrament”).  After recovering from a severe back injury and risky surgery that could have left her paralyzed, she dedicated herself to the idea of building a monastery for her order in the South.

In 1962, Mother Angelica led a group of nuns to Irondale, Alabama, where they established Our Lady of the Angels Monastery.  In a garage at this facility, she and her Poor Clares launched the Eternal Word Television Network in 1981, with an initial budget of $200.  Today the organization is an international entity with multiple television networks in several languages, plus presence on radio and internet; and an annual budget of over 30 million dollars.

By the late 90’s, the tasks of supporting a multimedia empire were clashing with the contemplative lives of the nuns; so Mother Angelica decided to leave the media operation there and take Our Lady of the Angels Monastery to some place quieter.  That place would be a patch of ground near Hanceville where she would build not only a monastery, but the Shrine of the Most Blessed Sacrament.  The facility was dedicated in 1999.  Mother Angelica retired as head of EWTN the following year, but continued filming her popular shows for another year.

Only two years after she moved to the new monastery, Mother Angelica suffered a massive stroke that took away much of her ability to speak.  Being unable to continue with her shows, she devoted herself to a quiet life of prayer and devotional activities at the monastery.

On Mar. 27, 2016 (Easter Sunday that year), Mother Angelica passed away at Our Lady of the Angels Monastery.

One year later, the monastery, Shrine, and EWTN are holding special services in memory of their founder.  The memorial event schedule is as follows:

For those interested, but not able to attend, the events will be televised live on EWTN.

For more information about the Shrine of the Most Blessed Sacrament or Our Lady of the Angels Monastery, visit https://olamshrine.org.