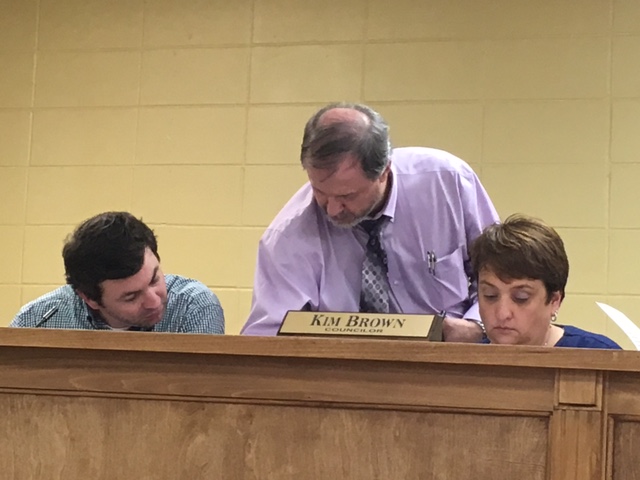 HANCEVILLE – The Hanceville City Council met Thursday evening, opening bids for materials and labor to resurface three city thoroughfares: Helen Warren Vogel Street, Whaley Avenue and McNutt Drive.  Two separate bids were taken: the first for 950 tons of asphalt, and the second for the resurfacing work (including transportation of the asphalt).  The total budget for the project was not to exceed $100,000.

M & S Construction and C. A. Langford, both of Guntersville, submitted bids for asphalt:

The contract was awarded to C.A. Langford.

The bids for transportation and labor were far more complicated.  Three bids were received:

Sackey Joles was the lowest bidder, but the bid came with certain conditions that raised concerns among council members.  Its contract required a deposit that was not included in the proposal.  Additionally, and more problematically for the council, Sackey Joles refused to be held responsible for water drainage, pavement cracks or raveling (crumbling of the asphalt sometimes called “alligator cracking”).

The council was clearly uneasy with the conditions of the Sackey Joles bid, but also uneasy about rejecting a low bid.  Willingham explained that, under the law, the bid process does not have to award the bid to the “lowest bidder,” but to the “lowest responsible bidder.”  Agreeing that the conditions of the Sackey Joles bid called the company’s responsibility into question, and that the demand for a deposit fell outside the parameters of the original proposal, the council voted unanimously to reject that bid and award the contract to Johns Paving.

Resurfacing of the streets is expected to begin as soon as Johns Paving can arrange transportation of the asphalt.

In other business, the council also unanimously approved the following motions:

Police Chief Bob Long reported a recent investigation that resulted in the seizure of drugs and a firearm from a home in Cullman. According to Long, children were removed from that home by the Cullman County Department of Human Resources.  In another incident, Hanceville Police recovered a stolen boat motor from the trunk of a car during a routine traffic stop.

The council meeting concluded with a listing of upcoming community events:

The Hanceville City Council meets at 6:30 p.m. on the second and fourth Thursdays of each month, with a work session at 6, at Hanceville City Hall. The public is invited to attend.