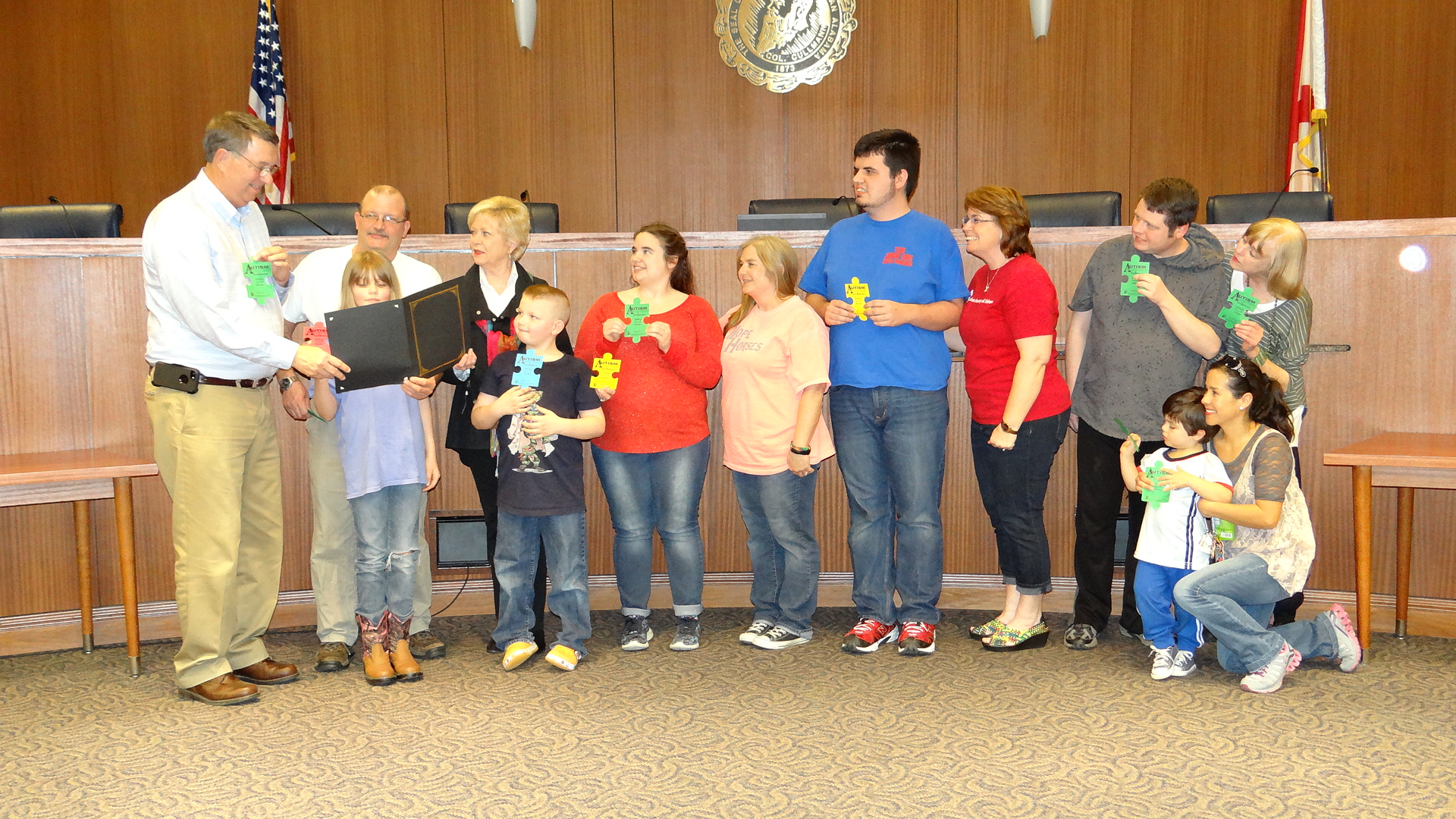 CULLMAN – Mayor Woody Jacobs has officially proclaimed the month of April 2017 Autism Awareness Month in the city of Cullman. Jacobs made the announcement on Monday and presented a signed and sealed proclamation to those in attendance.

Autism is a lifelong neurological disorder. According to recent statistics, approximately one in 68 children are diagnosed with an Autism Spectrum Disorder. Autism affects everyone differently, and can range from very mild to severe. It knows no racial, ethnic, or social boundaries and affects young and old alike.

Understanding of autism has grown tremendously since it was first diagnosed. However, there is still no known cure. Accurate and early diagnosis and the resulting appropriate education and intervention are vital to the future growth and development of individuals with autism. Hope lies in a broad spectrum of treatments and in an informed public and community committed to providing support and service to individuals diagnosed with Autism Spectrum Disorders.

On hand to accept the proclamation were Rhonda Davis and her son Jordan, Penny Brock and her daughter Stormi, Brian Bates and his daughter Ella and son Colt, Kay Gibbs and her son Geoffrey, and Yenny Laney and her son Nathan.

In the proclamation, Jacobs urged “all of our citizens to participate in local Autism Awareness Month activities in order to become better educated about autism and to create a better community for individuals with autism.” One such event coming up soon is the Walk for Autism & 5K Race to Solve the Puzzle on Saturday, April 8 at Heritage Park. This event is a timed 5K walk and race at 8 a.m. (registration begins at 7 a.m.) and a Fun Walk & Day for Autism at 11 a.m. (registration begins at 10 a.m.). There will be food, drinks, games and many resources for individuals and families. For more information on this event call Rhonda Davis at 256-962-2208, Sarah Bates at 256-338-1301 or visit www.WalkForAutismAL.com.

To find out more about Autism Spectrum Disorders – or to find out how you can help families or support the search for a cure – visit one of the following sites:

When I was pregnant with my son, I imagined many things for his life. I would lie in bed at night, rubbing my belly and picturing who this little being was going to grow into. Would he prefer sports or art? Would he be fascinated with science and space like his father? Where would he go to college? What would his first words be? On and on went the paintbrush of my imagination, painting a picture in my mind’s eye of what the future could hold for my son and our family.

Looking back, I can see now that Anson’s symptoms began well before he was 2 years old. He had always been a wonderfully fun, bright and quirky boy, but it was between 18 months and 2 years that the little quirks his father and I had shrugged off for months could no longer be ignored. His sensitivities to certain sounds and lights were becoming increasingly severe. He would scream at seemingly nothing. His eye contact and speech had dropped off almost entirely, especially with extended family. It was his grandfather who finally broached the topic that we had wanted to deny for so long: what was going on with Anson?

While the idea of denying something was going on seemed appealing to the panicked mother inside of me, pretending an issue isn’t there has never been my strong suit. So, I did what any mother does when faced with the unknown, I googled. I searched website after website, trying to confirm or deny the suspicion that was heavy on my mind. I finally could deny no longer that my son had strong signs of autism. After learning everything I could about this mysterious disorder I wasted no time reaching out to our local early intervention services.

For parents that I meet who are at a loss on what to do for their child, my answer is always to seek out early intervention services. This simple act was by far the best decision we have ever made for Anson. I cannot fathom where he would be today had we not taken that step sooner than later. When Anson began speech and occupational therapies at 2, he was non-verbal with severe sensory sensitivities. He could not color a picture, or say mommy or daddy. It was an unbelievably scary and desperate time for us as parents. We wanted help, and we wanted answers, and the therapists who came into our lives were the first lifeline we had to help us understand. Then when Anson turned 4, we finally received the confirmation of his diagnosis of moderate autism. And now, at 7 years old, Anson can speak with more and more sentences, he does his schoolwork independently, he knows how to write his name and is really getting good at video games.

The feelings of those early days are hard to relive; feelings of fear, confusion and anxiety were so heavy. A period of grief for the life we had envisioned for ourselves and our son took a substantial toll on us. The picture seemed so blurry, and some days it still is. What I have come to realize, however, is that Anson is not his diagnosis, it does not define him or his worth in this world. His future still holds tremendous hope and promise, he just has to take a different path to get to where he needs to go. There are many obstacles to overcome, many battles to fight, but this beautiful, smart and funny little boy is everything I could ask for in a son. He taught me the greatest lesson of my life, that the picture of our lives can turn out much different than we thought, but that doesn’t make it any less beautiful.