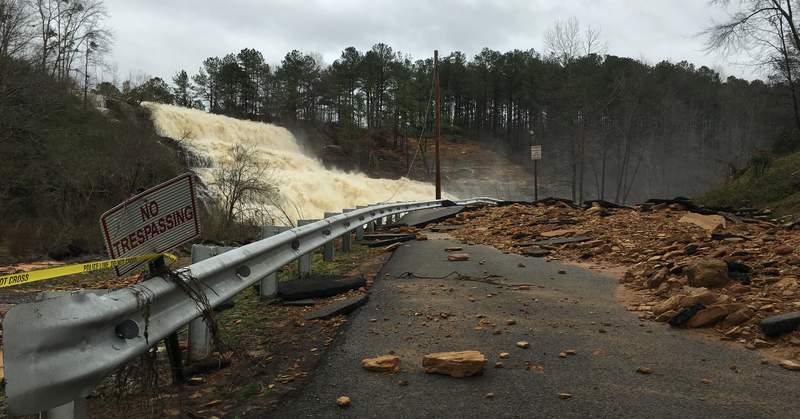 CULLMAN – Reconstruction of Larkwood Road should begin in mid-April, according to the Cullman City Council, who met for a regularly-scheduled meeting Monday evening. A section of the road was undermined and severely damaged in the Christmas flood of 2015, and has been closed since that time.

After review by the City and CDG Engineers, the council awarded the construction contract to the low bidder, Wiregrass Construction, in the amount of $407, 812.  The project will be funded by a Federal Emergency Management Agency (FEMA) grant (FEMA Project 4251-DR-AL), and City Clerk Wesley Moore pointed out that the bid amount came in under the original budget.

According to information from the Department of Streets, the project should begin in mid-April, and will be completed within 45 days.

The council voted to accept a $100,000 Community Block Development Grant and a $300,000 Appalachian Regional Commission grant to fund site preparation and the construction of the Cullman Health Technology Center.  Upon completion, the facility will be occupied by Sequence Health, a company specializing in medical data management and other aspects related to medical information technology.

At the request of Public Safety Committee Chairman Andy Page, Cullman City Police Chief Kenny Culpepper brought a report from a briefing by the Cullman County Emergency Management Agency earlier in the day.

Culpepper stated, "The early prediction is 60 mile-an-hour straight line winds possible Wednesday between noon and 2 p.m., with a possibility of some tornadoes."

The chief noted that the chances of tornadoes are considered small, but that the incoming storm will bring substantial rain.

The council voted unanimously to accept the following requests (from the agenda):

1.  A request from Marsha Franks of the Oktoberfest Board for a special event permit to hold the 2017 Cullman Oktoberfest in the Special Events Area from Oct. 4, 2017 until Oct. 8, 2017.

2.  A request from Culpepper to purchase from the state bid list a 2017 Ford Explorer for the Cullman Police Department in the budgeted amount of $30,184.

3.  A request from Water Superintendent Chris Freeman to purchase from the city bid list three double cab trucks from Mitch Smith Chevrolet in the budgeted amount of $88,924.50.

4.  A request from Water Superintendent Chris Freeman to purchase from the city bid list three single cab trucks from Eckenrod Ford in the budgeted amount of $79,713.

5.  A request from Information Technology Director Daniel Hunt to purchase AV equipment for the auditorium/courtroom (city hall auditorium) in the budgeted amount of $13,500.

The council voted unanimously to accept the following resolutions and ordinances, except where noted (from the agenda, including those items mentioned above):

1.  To accept a $100,000 CDBG grant and a $300,000 ARC grant to implement site improvements and construction of the Cullman Health Technology Center which will be occupied by Sequence Health.

2.  To enter into a contract with Community Consultants, Incorporated to perform project administrative services for the CDBG and ARC grants.

3.  To award the bid for the reconstruction of Larkwood Road to the lowest responsible bidder, Wiregrass Construction, Inc., in the budgeted amount of $407,812.

4.  To enter into a professional services agreement with CDG Engineers and Associates, Inc. to develop, plan and design a downtown sidewalk improvement plan on First Avenue.

5.  To enter into a professional services contract with TTL, Inc. for testing at Industrial Park V in the budgeted amount of $15,750.

6.  To enter into a services contract with Fabre Painting, LLC to repaint the caboose in Depot Park in the budgeted amount of $9,800.

9.  To rescind and repeal Ordinance No. 2014 – 12 based on the recommendation of the city attorney.  Ordinance 2014-12 annexed a parcel of land into Cullman.  The owner of the property, however, did not wish for that property to be annexed; the previous owner had requested annexation, but had sold the property before annexation took place.  The council was not informed of the sale, and the new owner was not informed of the annexation request.

12.  To set a public hearing on Mar. 27 for an Amendment 772 project.  Amendment 772 to the Alabama Constitution allows counties and municipalities to buy, sell or lease property and equipment for the purpose of economic or industrial development; and also, to grant public funds to private entities or issue bonds for the same purpose.  The exact nature of this particular project was not presented.

*The seventh resolution before the council, "To authorize the mayor to purchase the property adjacent to Depot Park and the City of Cullman Police Station for public and/or municipal purposes," was passed by unanimous vote of all participating council members, with Councilman John Cook abstaining.

**The eighth resolution, "To appropriate funds for Camp Meadowbrook," was tabled for further discussion, without any discussion taking place at this meeting.

The next Cullman City Council meeting will take place on Monday, Mar. 20 in the auditorium at Cullman City Hall.  The public is invited to attend.