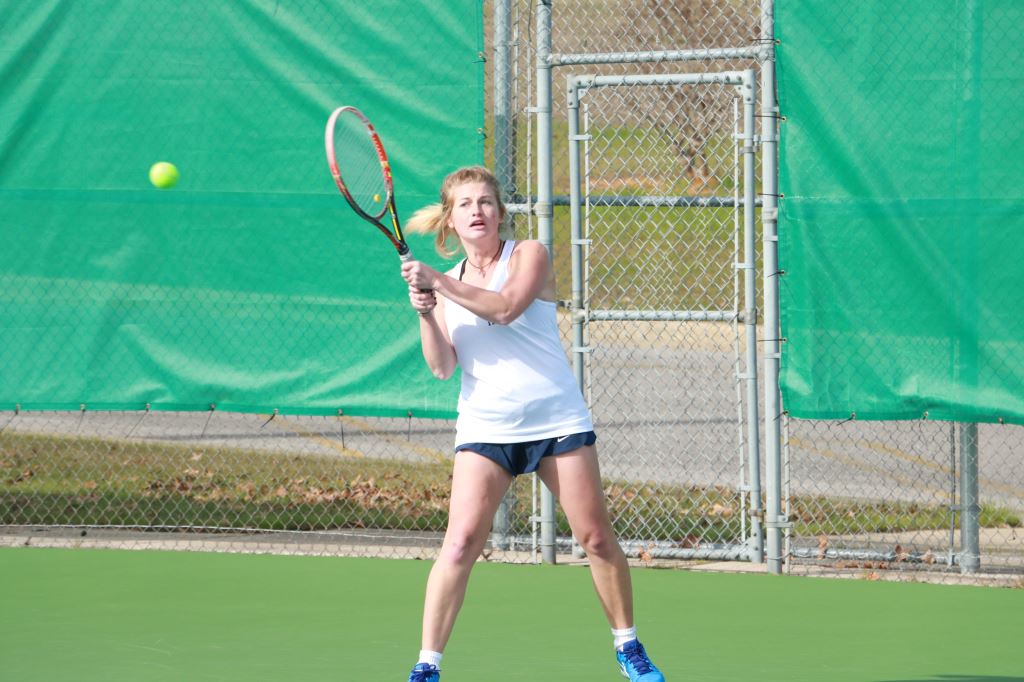 Freshman Tempie Ennis returns a serve against Snead State over the weekend.

“We have a lot of talent on this team. We didn’t play as well as we wanted to in the fall, but I think that will help us produce better scores when it matters the most. We have a lot of guys who can lead this team. I’m interested to see how it all shakes out,” said York, whose team finished ninth in the nation last season.

Hanvey, Senia, Willoughby, Brandon Lacasse and Luke Wilson are competing in Florida for the Lions.

The Wallace State men play in five tournaments in Alabama this season, including the ACCC/Region 22 tournament in Scottsboro and the NJCAA District 4 championship in Brewton.

York has coached the men’s program since 1987.

The Lady Lions finished 12th at the NJCAA Division I National Championship during their inaugural campaign last season, and they are eager to take a bigger step this season.

“The women are extremely excited about the spring. They came in during the summer and worked hard and want to get better each day. I believe they are going to be a lot of fun to watch this season,” York said. “I couldn’t have asked for a better group of women to get this program jump started with. They have a great attitude and love playing the game and representing Wallace State.”

Abbi Yeager has already signed with Blue Mountain College after her sophomore season is complete in Hanceville and fellow sophomores Madison Autwell and Ashley McCormick are close to signing four-year offers.

Dalys Mullican, Bradi Ruehl and Annalee Stephens are the freshmen on this year’s squad.

The Wallace State women are playing in Decatur on March 12-14 and hosting the NJCAA Region 22 tournament in Cullman on April 16-18.

Wallace State’s baseball’s pitching staff was as dominant as can be over the weekend.

Over a four-game stretch, Wallace State’s pitchers yielded only one run in 28 innings and closed the weekend with 22 consecutive scoreless innings as the Lions earned three victories.

Wallace State (3-1) opened the season on Friday, splitting a doubleheader with Motlow State. Wallace State lost the opener 2-1, but answered with a 10-0 rout in the second game.

The Lions swept Jackson State in a doubleheader on Saturday, winning both games 5-0.

“The thing I was most proud of is we walked only six batters the entire weekend and struck out 35. It’s so important to throw strikes,” said Wallace State coach Randy Putman. “It was one of the best starts I can remember our pitching staffs ever getting off to. Our bats came alive as the weekend progressed.”

In the 10-0 victory, starter Braxton Light (1-0) stymied the Bucks for four innings, punching out eight hitters and allowing only one hit. Peyton Hayes finished the game for the Lions on the mound.

In Saturday’s opener, freshman Kevin Donovan (1-0) held up his end of the bargain on the mound. He struck out nine Jackson State hitters over six innings, allowing only two hits.

Blake Rivera, Wallace Henry and Tanner Rusk combined on a one-hitter in the weekend finale against a team that cranked 93 homers a season ago. Rivera (1-0) got the starting nod and recorded six strikeouts, while giving up one hit in five shutout innings. Henry and Rusk each pitched a scoreless frame.

At the plate, Dalton Sinquefield finished the weekend with five hits, including four doubles, and six RBIs for Wallace State.

Kolby Robinson and Billy Reed each had multiple hits over the weekend. Heath Haskins had a pair of RBIs in the 10-0 win over Motlow and Maison Goodwin added a run-scoring double.