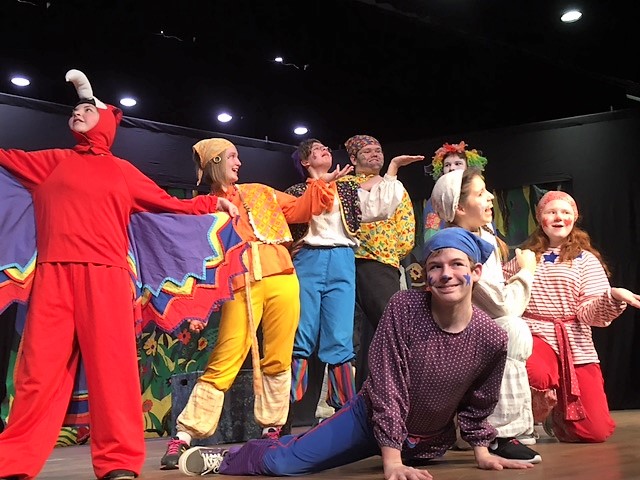 CULLMAN – On Saturday afternoon, selected children and teens from the Cullman area put on the first of two performances of "Treasure Island," a production created and directed by the Missoula Children's Theatre (MCT) of Missoula, Montana.  The theatrical company has come to Cullman annually for more than 20 years in partnership with Cullman City Parks and Recreation (CP&R).

In a new twist on the Robert Louis Stevenson classic, young Jim Hawkins discovers a treasure map drawn by a mysterious stranger in his family's seaside inn.  He is approached by the notorious pirate Long John Silver, who "generously" offers his ship and curiously off-beat crew to take Jim and his friends to find the treasure.  The pirates have an obvious ulterior motive, but Jim has an ace up his sleeve even he doesn't know about: his sisters (who can be just as devious as the pirates) have stowed away on the ship.  With the map and a flock of tiny seagulls to guide them, the crew sets off on a hilarious adventure.

Quattlebaum, who has supported the program for several years, said, "I've always loved this.  I have to thank my policy holders for allowing me to do this.  The arts were near and dear to my heart growing up, and I know how much impact they can have on the kids: building character, self-esteem and confidence.  To watch these kids go from Monday to Saturday is just amazing.  It's a wonderful event.  It's important to support the arts.  Cullman is growing, and this segment needs to grow with it."

MCT's directors for this production are Samantha Hayes and Jacob Hawk.  They form one of four MCT teams currently on a 20-week tour to bring their take on “Treasure Island” all over the country.  In addition to directing, Hawk also played the part of Long John Silver.

According to Hayes, 121 area kids auditioned last Monday afternoon.  Hawk related what MCT was looking for in the audition process/

"We look for three things: we look for expressive bodies, loud and clear voices and the ability to listen and follow instructions."

Those auditions led to the casting of 64 participants, who then spent the next four evenings rehearsing hard: learning lines, songs and dances before Saturday's performances.

Musical accompanist and cast parent Emily Smith said, "By Saturday these kids have put together an hour-long full musical, and they work really hard.  It's really fun; they're doing their homework in between, on breaks.  I don't know if their grades are suffering, but I know that they're gaining a lot of artistic experience."

Hawk reflected on his week in Cullman. "We were blown away at the talent and the intelligence of the kids here, the eagerness to jump into this.  A lot of kids do it every year, but we have a lot of new kids.  It was just a really awesome week with these kids.  They really brought their A-game. They brought a lot of energy, a lot of life to their parts.  I couldn't be prouder than I am of these kids."

Hayes added, "And it's such a dynamic cast, because we have as young as 6 years old all the way up to 16.  It's such a wide range of ages.  It's really cool, because the youngest can look up to the oldest; but really I think sometimes the oldest learn from the youngest, because they're just willing to go for it and be super, super silly!"

Hawk continued, "I don't know if people realize, a lot of families do it over and over again, but if they haven't done it, I don't think they realize how much their kids grow in this one week.  We see some of these kids go from kind of shy to watching them grow in confidence, character and poise, becoming leaders oftentimes backstage and onstage.  They don't have to become theater professionals for it to have a great impact on their lives."

Before and after the show, the Tribune talked with parents, performers and even a couple of MCT/CP&R theater veterans who were on hand.

Cast parent Michelle Smith, whose family has participated several times over the years, shared, "I really am excited that they bring it every year for an opportunity for us to have the arts and theater in Cullman, and the kids are always excited every year when it comes around.  I feel like when they're in the play, it's kind of like a homecoming reunion for them.  There's a lot of fun and a lot of camaraderie among the actors and actresses."

Smith's sons Andrew and Patrick were in the cast.

"I've always enjoyed it," Andrew Smith shared.  "I love working with everybody, and I love expressing myself.  I really feel I can be as funny as I want, and I can make the character my own.  It's not like cookie-cutter; they let you do your own thing.  They tell you what to say, and you make it your own."

Younger brother Patrick Smith gave an honest review as only a young kid can. "It doesn't really matter how big the groups are.  Everyone is just as good as the other person.  They (MCT directors) don't pay more attention to one person.  It's crazy how they do it in five days, because there's a lot of lines, a lot of stuff to remember, and songs, all that kind of stuff.  They have a lot of young instructors, so they're not like old and uptight, like mom."

Paige Harbison, who got her start onstage in MCT/CP&R productions years ago, and now makes her living as a full-time stage performer at Dollywood in Pigeon Forge, shared a few words about her experiences in years gone by.

"I started off with MCT probably when I was about 7 or 8 years old, and I did this up until I got into high school.  It just inspired a love of performing, so I kept pursuing it through high school and college, and now professionally.  It was so much fun.  I learned a lot from MCT."

Harbison's brother Waid Harbison, also a MCT/CP&R theater veteran, is now marketing, programs and events coordinator for CP&R, and was the organization's liaison with MCT for this production.  He reflected on this week's production and his own experiences.

"It's been really, really good.  These kids do a fantastic job, getting up on stage after coming in here for a week.  It's impressive; it speaks a lot of them and what they're doing, and it also speaks a lot about MCT, and how effective they are.  It says a lot about what the community is interested in, as far as the performing arts go, so this is why we want to bring it back every year.  Even if they're not going to perform (professionally) and be an actor, they learn great communication skills, being in front of people, overcoming stage fright, and I think that's a really good skill.

“I think it’s one of the better programs we offer at CP&R, and we're actually looking at expanding our performing arts programs to offer a little bit more, because it's really grown.  When I was a kid, we had 40 or 50 kids try out, and you just all made it.  Now there's 130 kids who want to be involved, so we'd really like to think about doing some theater camps this summer, and maybe some community theater here in the fall, as well.  They want this in the community.  It's something we're glad to offer, and I'm excited about it."

For those kids who were not cast

Hayes said, "Continue to audition!  We are professional actors, and we do not get cast in everything.  Probably for every 10 things we audition for, we'll be happy if we get cast in one.  Welcome to the life of an actor!"