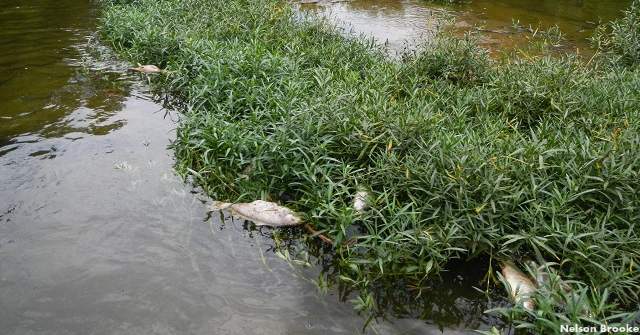 HANCEVILLE – The Alabama Department of Environmental Management (ADEM) on Wednesday released a consent order against American Proteins in Hanceville. The company has agreed to pay a civil penalty of $50,000. The penalty was levied against American Proteins for violations including the company's release of at least 80,000 gallons of wastewater into the Mulberry Fork in May/June 2015 and the release of 900 gallons of sulfuric acid into the Mulberry Fork in August 2016.

“The material reached the Mulberry Fork resulting in a subsequent fish kill,” said a statement from Jerome Hand of ADEM in August.

The Alabama Department of Conservation and Natural Resources (ADCNR) was brought in to assess the extent of the fish kill. According to its report, "37, 810 fish were killed along a 1.55 mile stretch of river."

On Aug. 19, the president of American Proteins, Mark Ham, gave the Cullman Tribune the following statement:

"On Wednesday, August 17, 2016, the Company’s Hanceville facility experienced a spill from its sulfuric acid tank.  The Company promptly notified the appropriate agencies and has been working closely with them in addressing this spill.  The spilled sulfuric acid was contained; however, due to the nature of the spilled material, the containment system failed and a small portion of this material along with storm water was spilled into a tributary of the (Black) Warrior River. The Company estimates that approximately 150 gallons of sulfuric acid along with 750 gallons of storm water was spilled into the tributary.  The Company took immediate steps and stopped the flow of the spill. The Company is also taking steps to ensure that this type of spill does not occur in the future. The Company continues to coordinate with those agencies."

BWR’s Nelson Brooke said at the time, “American Proteins’ chicken rendering plant on the Mulberry Fork is a massive facility.  It is right next to the river, just upstream of I-65. This sort of accident is inexcusable, and totally preventable.  Proper housekeeping, maintenance, spill control planning should keep something like this from ever happening.  This is not American Proteins’ first mishap on the river.  In May of 2011 they spilled 1.6 million gallons of wastewater into the river. We expect American Proteins to be held fully accountable by state regulators.  DCNR counted the fish, and can – and should – levy a fine based upon their investigation expenses and the economic valuation of the dead fish.  ADEM can – and should – fine American Proteins for spilling hundreds of gallons (of) sulfuric acid into the Mulberry Fork, to encourage better housekeeping and to deter future mishaps.”

American Proteins late Thursday provided the Cullman Tribune with the following statement, addressing both events this week and the claims by BWR about the May 2011 wastewater spill:

The directors, stockholders-and management of American Protein's (API) would like to convey our regrets and apologies to the community over the accidental release into the Mulberry Fork Tributary which occurred at our Hanceville operation on Wednesday August 17th. We at American Proteins take this matter extremely serious and believe in being good stewards of our community. While API recognizes its role and responsibility for this release we believe that a full explanation of the event is owed our friends and neighbors in Hanceville and surrounding communities.

On Wednesday morning August 17th a third party company delivered sulfuric acid, an ingredient utilized in our environmental systems, to a tank they owned located on our property. The tank had a containment system, inclusive of a clean out valve, to avoid any spills due to equipment malfunction. The containment system clean-out valve was left in the open position by the third party delivery driver effectively defeating the purpose of that containment system. Due to an internal pipe failure in the primary storage tank a leak ensued and was identified by API personnel Wednesday August 17th. As a result of the containment system clean out valve being left in an open position the leak was not contained and drained into an API containment pit and mixed with approximately 7,500 gallons of water. Due to the reactive nature of the mixed liquid  a pipe in that system was damaged. This damaged pipe is what allowed the mixture, estimated to be 750 gallons of water mixed with 150 gallons of acid, to escape into the tributary. We immediately notified the Alabama Emergency Management Agency who subsequently notified the Alabama Department of Environmental Management (ADEM) and we began to monitor the tributary's pH with samples taken near the release site and downstream of our discharge on an hourly basis as suggested and supervised by an ADEM agent. All pH readings returned to acceptable levels by Thursday morning August 18th. Unfortunately, there was damage to the fish in the tributary for which API takes full responsibility for restocking those lost fish. There have been no reported injuries related to this release and we have had the vendor empty and remove all sulfuric acid tanks from our site. API personnel and contractors have worked around the clock to repair and replace our damaged containment systems.

There has been recent mention of a 1.6-million-gallon release that occurred in 2011. As anyone living in our area knows we were all devastated by the tornadoes that ravished North Alabama on April 27, 2011. This release was the direct result of tornado damage to one of our four waste water treatment basins. Because this release was the direct result of a natural disaster no enforcement action was taken by any regulating agency. American Protein's is not only responsible to our local communities but also is regulated by The Federal Environmental Protection Agency and Alabama Department of Environmental Management. Our water treatment facility is staffed with 8 highly qualified personnel with four of those certified as State Wastewater Treatment Operators and two holding a Class IV Operator's License. Daily our operators perform over 135 analyses, log 1,430 journal entries and 275 data entry points into our computer system to meet state regulations. As a comparison our waste water plant treats organic loading comparable to a city of more than 900,000 people or equal in size to the City of San Jose, CA.

APl's Hanceville Division has been in business since 1979 and in the last 30 years has invested in excess of $18 million in capital assets for environmental equipment. We employ approximately 250 full time employees, we spend over $3.5 million annually in environmental operating expenses, and invest millions annually in plant equipment capital and maintenance. A few of our most recent investments are the replacement of 30 of our diesel tractors with Liquid  Natural Gas tractors helping reduce our carbon footprint as well as the  addition of a new 100,000 CFM air cleaning unit to reduce plant emissions. We are proud of our local team and their accomplishments. Since 2001 our waste water treatment facility has twice won the Excellence in Industrial Wastewater Award presented by the Alabama Water Environment Association and twice won the US Poultry Clean Water Award for full treatment.

Awards are recognition for a job well done but what we are most proud of is our community involvement and support. For many years we have contributed to scholarship funds that touch the lives of many in our community as well as contributions to local community charities such  as Children's Hospital, United Way Cullman, American Cancer Society, HOPE, Boy Scouts, 4-H, Jeremiah Castille Foundation, City of Hanceville Kids Night Out, Hospice of Cullman and Cullman County Sheriffs Rodeo to name a few. In 2015 those contributions were in excess of $160,000. Our continued support comes not as an obligation or inducement rather as a desire to be a good corporate citizen living, working and enjoying the areas we operate in. In closing, thank you to the many in our community that have supported us in the past and through this unfortunate event.

Consent Order by cullmansense on Scribd