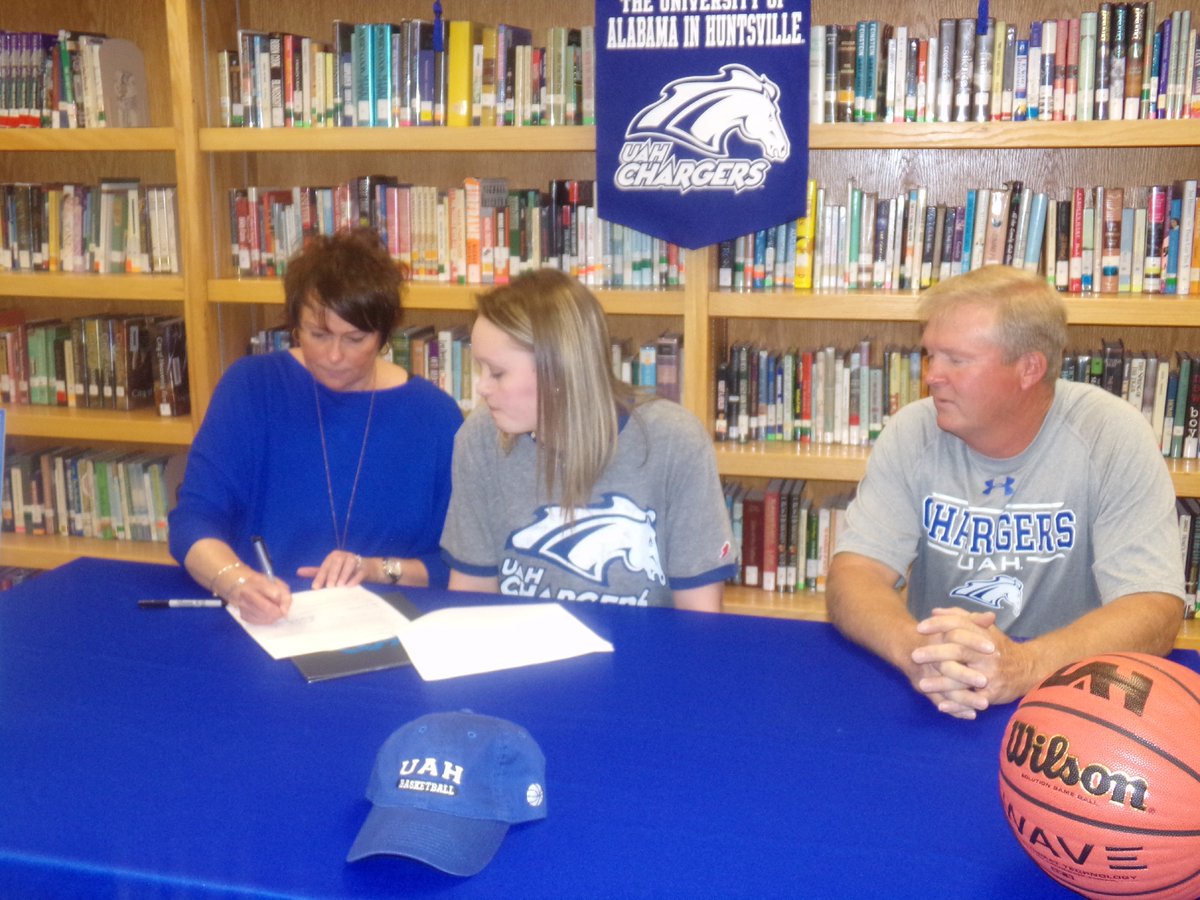 COLD SPRINGS – Considered one of the hardest working high school basketball players in the area, Cold Springs' Emme Willoughby will look to her senior season with the Lady Eagles, beginning this week, then take her work ethic to the University of Alabama in Huntsville for next season.

The 5'11" swing player made it official Monday afternoon inside the Cold Springs High School library in front of her family, her teammates, coach Tammy West, members of the Cold Springs administration and friends.

Willoughby had committed to play for UAH coach Andrea Lemmond during the summer, prior to taking part in the annual Alabama High School Athletic Association (AHSAA) All-Star Game in Montgomery.

With early signing for student-athletes allowed by the NCAA, Willoughby decided to get the process finished a day before she begins her final season in the blue and gold.

Cold Springs opened up the 2016-17 campaign Tuesday evening at Jesse George Gymnasium against Vinemont. On Friday, the Lady Eagles will have an early season test in the county, meeting Fairview at home. Fairview will have four games under its belt when the Lady Aggies pay their yearly visit to Cold Springs.

"I'm delighted getting this opportunity," Willoughby said following the signing. "It's special to play here at Cold Springs. The community loves to come out and support us. We try to play our very best every time out when a lot of people come into the gym."

West expressed a lot of pride for what Willoughby means to the game and to her program. "She deserves it. She has worked so hard for this. She comes into the gym at 6:00 in the morning, works on her weaknesses. Emme leads by example"

Willoughby was a major presence in area basketball as a junior with an average of at least 20 points a game. With the opposition unable to slow her down, Willoughby and the Lady Eagles won the Cullman County title for the first time since 2010, defeating Good Hope in the finals at Wallace State's Tom Drake Coliseum 48-44.

To get to the championship, Willoughby and the Lady Eagles ended Holly Pond's run at being on the top of county hoops by a 44-40 triumph during the semifinal round.

Willoughby said the county championship game stood out as one of the memorable moments in her career.

Another one from 2015-16 came shortly after the Lady Eagles began the season.

In the well-recognized Lady Hawks' Thanksgiving Classic at Danville High School, Willoughby upped her game against one of the top scorers in the state- Lawrence County senior Rachael Childress.

Childress was bound for UAB following the season and not easy to keep contained from having a big night on the floor every time out.

In this contest, Willoughby scored a career best 33 points to 29 for Childress with Cold Springs coming from behind in the fourth quarter and winning the contest 66-61.

Willoughby moved past the 1,000-point mark in her career and went on to All-County honors, along with Class 2A All-State, All-Area, AHSAA All-Star and the WKUL prep player of the year.

When Willoughby reports to UAH, she will not be the only player from Cullman County who is on the roster and contributing to the rise of the Lady Chargers in the Gulf South Conference.

Baylee Johnson, a former standout at Cullman High School, will be in her junior season in 2017-18 when Willoughby reports next fall for her freshman campaign.

A pair of former Cold Springs standout athletes will welcome Willoughby with open arms when she arrives in Huntsville.

Chayse Elliott is a member of the Chargers' basketball program while Kramer Crider is in his freshman season as a participant with the cross-country team.

Willoughby is the first local female athlete to sign a national letter of intent during the fall signing period and the 11th overall from the county that has done so as of Monday afternoon.

Willoughby will also be looked at as the possible winner of the Bill Shelton Award during the Cullman County Tournament in January. The award recognizes the outstanding athletic ability of the winner along with greatness in the classroom and tremendous recognition in the community.

Willoughby will look to follow Bailey West who won it last season as a Cold Springs senior and join the elite list of Lady Eagles who have captured the award such as Ginger Aaron, Christy Campbell, Lori Graves, Kasey Wilbanks, Georgia Myrex, Paige Parker and West.

Willoughby is the second consecutive Cold Springs basketball player to sign an NCAA national letter of intent. At this time last season, Triston Chambers placed his name to a scholarship with Samford University and made his debut Monday evening at the University of San Diego.