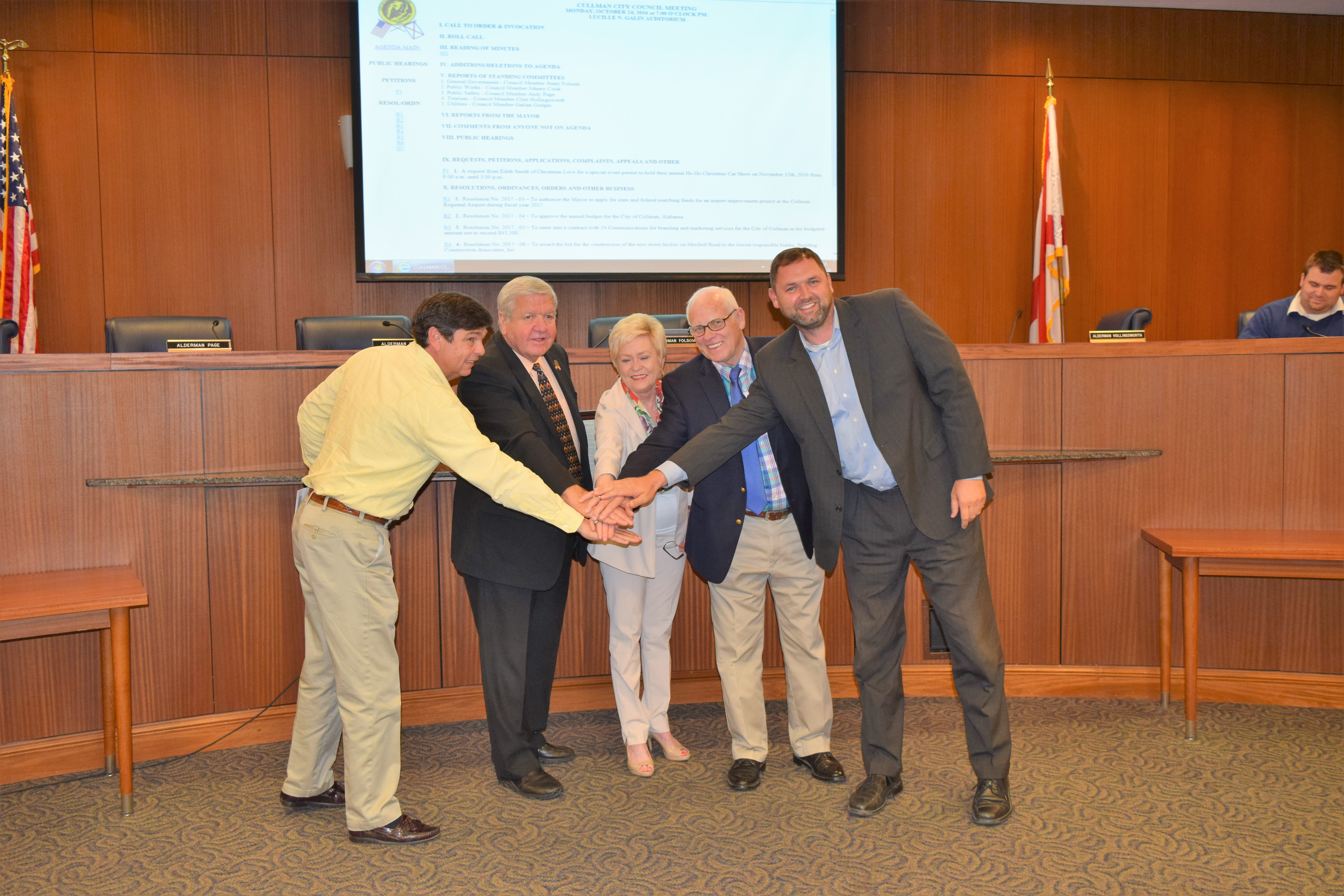 CULLMAN – The Cullman City Council held a regular meeting on Monday to approve the budget for the next fiscal year, and to wish beloved Mayor Max A. Townson farewell, as Monday’s was his last council meeting as mayor of the city of Cullman. Council President Garlan Gudger, Jr. was absent due to a schedule conflict that had him out of town for the evening; President Pro-Tem, Jenny Folsom, took the reins.

The council presented Townson with a framed resolution depicting Townson’s service to the city of Cullman and the city’s gratitude for his eight years of service; the mayor’s administrative assistant, Leanne West, wrote the resolution, and, in the words of the Townson, “She has made me the mayor that I’ve been for the last eight years.”

Sitting in on the meeting was Boy Scout Troop 219 of Cullman, there as a part of their Citizenship in the Community merit badge requirements. The troop is led by Scoutmaster Jonathan Hayes. Townson addressed the troop directly, saying, “I know that you’re going down that path, because some day you may be standing up here just like this. I never dreamed of this when I was young so always do your best.”

Cullman City Police Chief Kenny Culpepper rose to present commendations to several police officers for their response to a domestic dispute call where, according to Culpepper, “The suspect had threatened to kill officers and had barricaded himself inside of a room.”

Tactical members of the Cullman City Police Department were called in to assist, alongside members from the Cullman Wastewater (sewer) Department’s Sewer Video and Surveillance crew, which sent in a robot to be used to negotiate with the suspect. After a two-hour negotiation, the suspect allegedly began attempting to burn the house down. At that point, the officers had to rush into a barricaded room with an armed suspect.

“There was no injury or loss of life on that call, thanks to the valor and heroism of the officers,” according to Culpepper. Recognized were Lt. Jeff Warnke, Sgt. Scott Sanford, Officer Clint Sanford, Officer Roy Bates, Officer Intae Suh, Officer Jeff Mize, Sgt. Adam Clark, Officer Adam Walker, Sgt. Christopher Nichols and Cullman Fire Rescue Chief Ed Reinhardt, Jr. After each officer was recognized, a large and lengthy standing ovation occurred.

Later in the evening, Rev. Jack Collins, from Northside Baptist Church, rose to speak about his church’s gratitude for the Cullman Police Department and police officers across the nation.

“We recognize the wonderful courage displayed by the men and women in law enforcement and the risk that they take to keep our community safe,” said Collins.

Townson brought up the dire state of Cullman’s water supply, Lake Catoma and what homeowners need to do to preserve our water supply for the duration of the drought.

Townson continued, “If we all pitch in and voluntarily cut down our water consumption it will let Catoma build back up.”

An item not on the agenda Monday was another gift for Townson. City Attorney Roy Williams, Jr. presented Townson with the flag of Cullman on behalf of the City’s administrative staff.

“The city of Cullman is a city of Character,” said Townson. “The tornado that came through (town) woke up a sleeping giant and (Cullman) became phoenix rising. That character was displayed and proven by the citizens of Cullman.”

In other business, the city approved the annual budget for the 2016-2017 fiscal year.

“This is the biggest budget that we’ve ever had,” said Townson. The budget includes a four percent pay raise for city employees, which will cover the rising cost of insurance.

“The general fund budget this year is $32,846,844,” Townson said. That includes a $4.5 million fire station (no. 3) on Highway 157, a $2.4 million street facility on Mitchell Road, a $3 million wastewater facility on Eva Road and improvements to the wastewater station that was damaged in the Christmas flood of 2015, along with other projects.

The council authorized the mayor of Cullman to apply for state and federal matching for an airport improvement project during the 2017 fiscal year.

The City entered two contracts.  The first was with 24 Communications, for branding and marketing services for the City, which is expected to not exceed the budgeted amount of $45,500. The second was with CDG Engineers & Associates, Inc. for engineering services to enter stage five of the Downtown Streetscape project from First Avenue Southeast to Third Avenue Southeast, which is expected to stay within the budgeted amount of $41,000.  The City also agreed to pay the Cullman Area Chamber of Commerce $2,500 for their marketing services.

The City awarded the construction of the street facility on Mitchell Road to the lowest bidder, Building Construction Associates, Inc. of Decatur. Townson pointed out that the citizens of Cullman need to be aware that “all of these facilities, these capital outlays that the council is making, are necessary to make sure that businesses and citizens have what they need in this community so that they can carry on with their activities.”

The council would like to remind the citizens of Cullman that the annual Severe Weather Preparation Sales Tax Holiday is quickly approaching; the tax holiday will be Feb. 24-27, 2017.

And finally, Don Smith was appointed to the Cullman City Zoning Board.

The next meeting of the Cullman City Council will be on Monday, Nov. 7, at which time the new mayor, Woody Jacobs, and all council members will be sworn in for the next four years. The meeting starts at 7 p.m., with a reception to follow. The public is invited to attend.