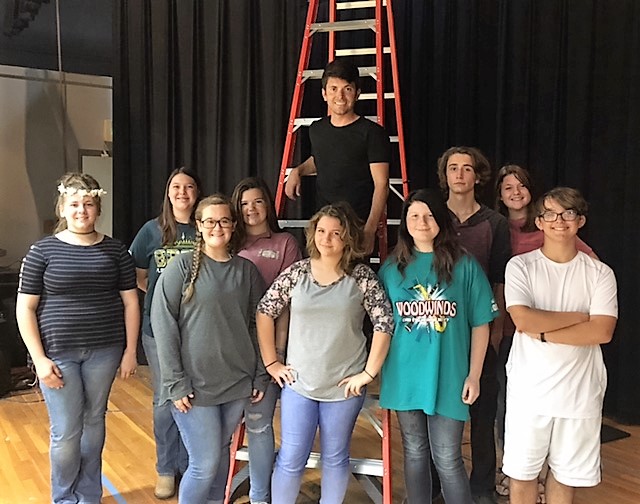 Ty Parker and a few of his performing arts students showing off progress on West Point High School's stage.

WEST POINT – In a day when arts programs are under increasing threat in schools across the country, some folks see things differently.  The people of West Point and West Point High School are just such folks.  The school's performing arts program is alive and well, thanks to eager students, a supportive administration and community and an energetic spearhead named Ty Parker.

A Vinemont native, Parker is in his first year at West Point after six years at Good Hope.  When our interview commenced, he gave instructions to the students present about what to do while we talked, and they did it.  It was quickly obvious that these are dedicated students whose teacher has both their attention and their respect.  He is passionate about teaching the arts, and at least as passionate about cultivating artists.

The program he heads up is already impressive: a choir working on its own Christmas CD, a theatrical team preparing for an upcoming production of "High School Musical on Stage," and of course the West Point Bands.  There's even a new dance class with more than 40 students enrolled.  Additionally, Mrs. Alaina Drinkard teaches visual arts.  Of his first encounter with West Point students interested in the arts, Parker says he was amazed at both the numbers and the skills he saw.  "I was blown away at the talent," he recalled.

And West Point has even grander plans.  Working for now in a multi-use gymnasium, Parker envisions a free-standing auditorium/theater on the campus.  In the meantime, the school is working to upgrade the existing sound system before the upcoming musical, hanging curtains onstage and installing ballet barres for dancers.  The introductory dance class will soon be augmented with help from The Factory Dance Productions.  Parker hopes to see two theatrical productions a year, and not just any shows: he's talking about Broadway-style shows like "Phantom of the Opera."  His stated goal is simple: "I want a cultured school."

While he is energetic, Parker is also quick to dispel any notion of a one-man crusade.  He praised both the school administration and Cullman County Schools Superintendent Shane Barnett for their support and active assistance in these projects. He also noted that the close-knit West Point community has backed him up at each step.

Parker admits that, at times in his career, he has felt discouraged about the direction of arts programs in high schools in general.  He is not one for giving up, though; quite the opposite, in fact.  Seeing a crucial need for arts, he is driven.  He said, "When you go to work every day and see the kids who want to be involved, how can you not do it?"

Parker has also launched a beginner band program at Harmony School, a community school near Logan and Crane Hill in Cullman. The school houses grades kindergarten through eighth, at which point most of the students move on to West Point High School for their 9th-12th grade years.