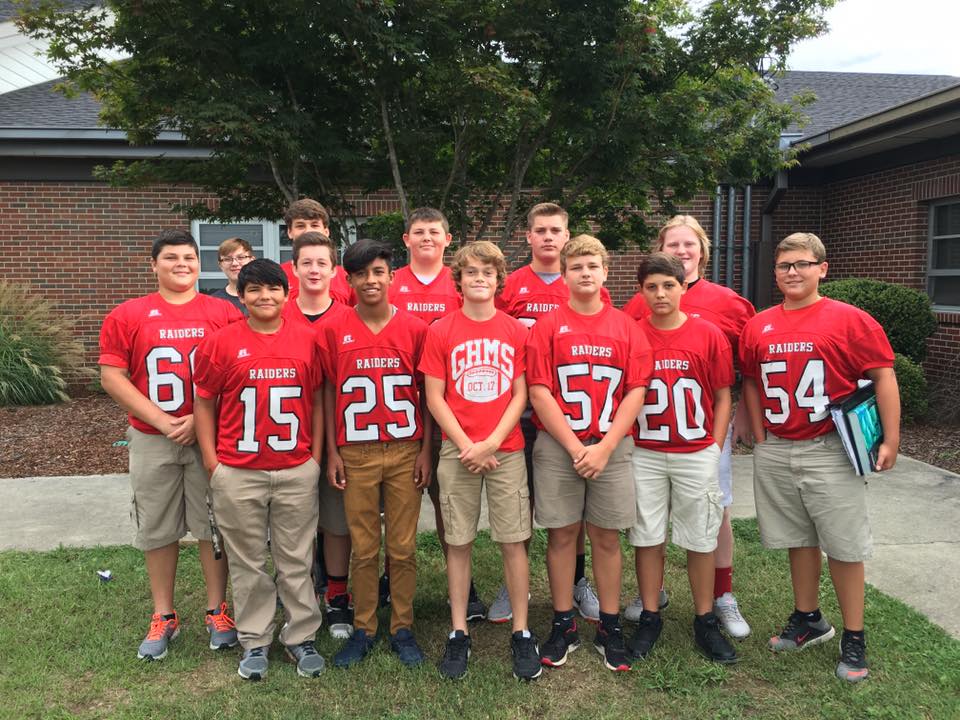 GOOD HOPE – No one has been able to take down the Good Hope Raiders in the past four years of regular season middle school football.

Their winning streak extended to 26 straight when they opened the season Monday evening at James Shabel Stadium, shutting out the Holly Pond Broncos 28-0.

Good Hope's supremacy at the top of county middle school football ended last October when they lost in the championship to Vinemont. The Eagles prevented the Raiders from a fourth straight title capture.

Now coach Tyler Hudson's Raiders aim to show they can bounce back from adversity and it began on the home turf in which they outgained Holly Pond in offense 313 to 76, scoring three times in the first half to have control of the contest by the time it reached intermission.

The Raiders forced two fumbles in the first quarter, one on the opening kickoff and another late in the period.

Good Hope also turned the ball over with a fumble three plays into its first series, then the Raider defense forced an 11-yard punt, taking the ball at the Holly Pond 40.

Colton Bagwell got loose for a 39-yard touchdown and the Raiders were on the board at 6-0 with 3:20 to play in the first. The conversion attempt failed.

A fumble was recovered by the Raiders on Holly Pond's next drive, putting them in good field position from the Good Hope 49-yard line.

This drive ended when Tanner Malin found Lane Speegle open for 38 yards and the TD with 1:39 to go in the period. Bagwell ran in the conversion and the Raiders led 14-0.

Good Hope's defense got very aggressive in the second, holding the Broncos to negative yardage in running and throwing the ball. The Broncos had a minus 12 on the ground to go with minus six in passing for a negative 18 yards when the game reached halftime.

The Raiders tacked on a third touchdown as Eli Pugh finished a 64-yard series with an 18-yard run. Jared Pugh followed with the conversion run and the Raiders enjoyed a 22-0 spread at the break and had outgained Holly Pond 205 to -2.

Good Hope received the second half kickoff and had its longest drive of the evening. The scoring series was 81 yards and two-and-a half-minutes off the clock.

Bagwell ripped through a hole for a 68-yard run on the fourth play of the drive. The conversion failed and the Raiders increased the advantage to 28-0.

Another Good Hope drive in the period chewed up real estate, but the Raiders lost the football, preventing them from scoring once more.

In the fourth quarter, coach Hudson started to substitute. The Raiders had a good drive in taking time off the clock, but punted and the Broncos took over from their 24 with 1:48 to go in the game.

Running back Levi Boatright had runs of 16, 11 and 20, plus a 20-yard dash from quarterback Thomas Bell had the Broncos on the verge of getting the zeros off their side of the scoreboard.

Unfortunately, Boatright fumbled when he was tackled after the 20-yard run. Raider defender Wyatt Jones pounced on the ball at the Good Hope eight.

Nelson Hernandez picked up 10 yards for the Raiders on the next play that ran out the clock and Good Hope had recorded a shutout with domination on the offensive side of the ball.

Pugh had 52 yards on the ground and a touchdown, Bagwell led the Raiders with 137 yards and two touchdowns. Ethan Anderson added 50 yards rushing to the Raider total as they accounted for 15 first downs.

Malin was three for three in the passing department for 77 yards and a touchdown. Speegle caught two passes for 58 yards and a score, Anderson had one reception for 19 yards.

Boatright ran for 47 yards in the fourth quarter, but the fumble at the Good Hope eight was a factor that prevented a possible score by the visitors. Bell had a 20-yard run, did complete two passes, but they were tackled behind the line for negative gains.

Good Hope has its next game with Fairview on Sept. 6 while Holly Pond hosts Vinemont the same evening.