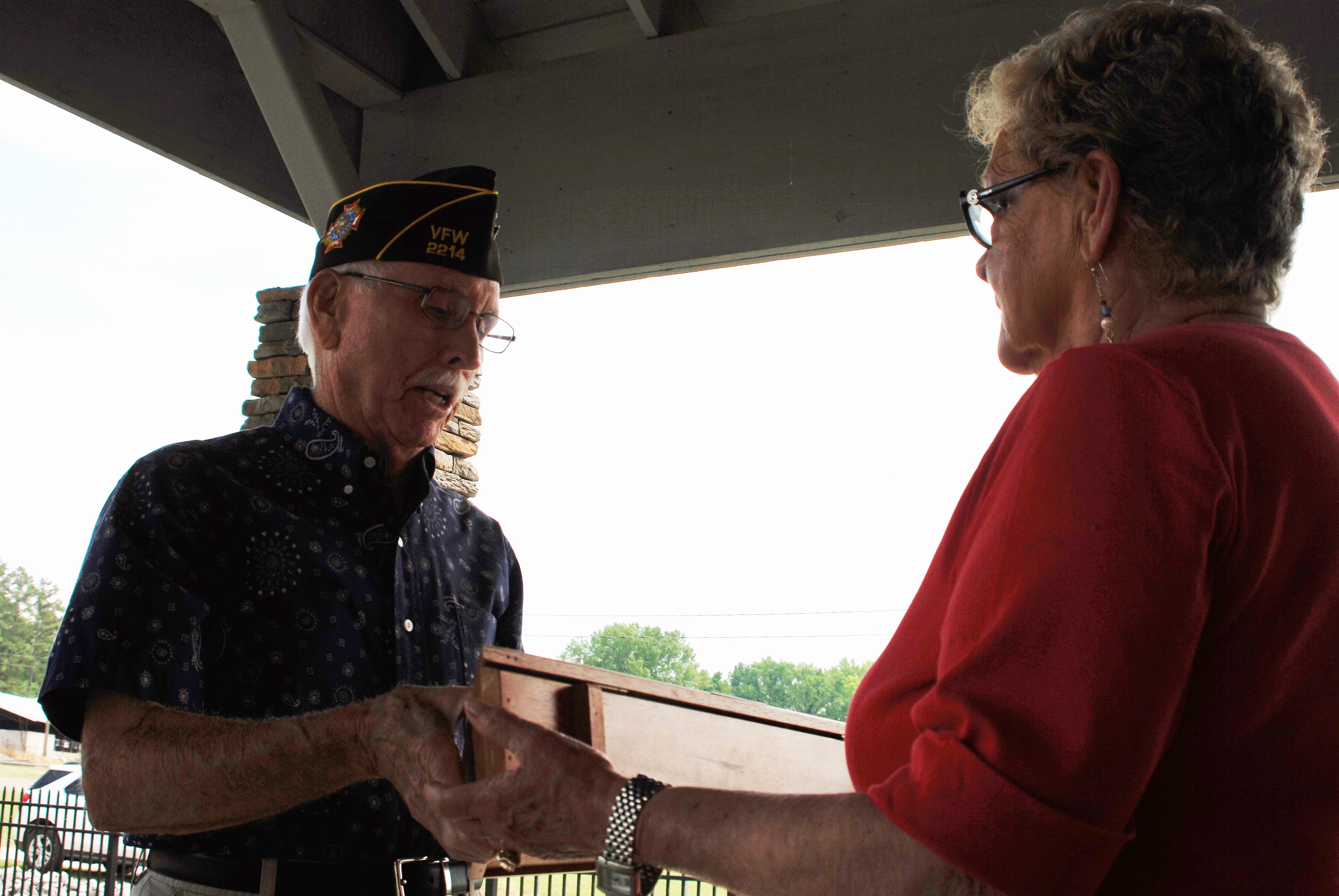 And so Talmadge, we are gathered here today; still enjoying the sweet freedom that you bought us, with thankful hearts for your selfless devotion to your country.”
Retired Col. Ken Brown

CULLMAN – On Saturday, Cullman's Veterans of Foreign Wars Post 2214 hosted a Memorial Day program at Veteran's Park at Sportsman Lake. The program honored the Floyd family, whose brother Talmadge was killed in action during WWII in February 1945. Talmadge Floyd was honored as a representative of all of the names inscribed on the walls of all the monuments at the park.

“We are here today to pay tribute to each and every American whose name is on a war memorial in our park,” said retired United States Air Force Col. and Vietnam veteran Ken Brown. “Since I was asked to organize this program today, I wanted to make certain we offered details on the life behind just one of the names inscribed here. By doing so, we can honor his memory, honor his family and hopefully allow him to represent all the fallen we remember here today. This morning I would like to make a few remarks about Talmadge Floyd, who was killed in action in the closing days of World War II.”

Talmadge Floyd was born in 1921. He and his family lived and worked on a farm near West Point, which is where he attended school. While not in school, he spent most of his time working on the family farm. He eventually took a job with the N.C. Arnold Lumber Company and later joined the Army in the summer of 1944. He was 23 years old. Before leaving home, Talmadge married a Cullman girl, Ms. Audie Cagle, and the happy couple had a son whom they named Dwight.

“Family and friends say that Talmadge had a great attitude about serving his country and mankind,” said Brown. “He had lots of friends, was happy and upbeat and was always positive. He left Cullman in September 1944, went to basic training, sailed to Europe and arrived on the front line in December of that year, just in time for the Battle of the Bulge.

“He was a rifleman in the 358th Regiment of the 90th Division. On Feb. 9, 1945, just 90 days before the end of the war, Talmadge was killed as his unit attempted to penetrate the famous Siegfried Line into Germany.  His friend Charlie Glover, also from Cullman, was with Talmadge when he was killed. When Charlie returned home after the war, he was able to comfort the Floyd family who had agonized and wondered about Talmadge’s suffering. Charlie told them that he was killed instantly and did not suffer.

“The 90th Division was in the thick of the action,” Brown explained. “When Gen. Patton was asked to recommend 10 percent of his command for award of the Presidential Unit Citation, he singled out the 90th Division as the only entire unit to be so recognized. The 90th lost 3,870 people who were killed and over 21,000 who were wounded. This, as we are often reminded, is the cost of freedom.”

On behalf of the community and grateful nation, Col. Julian Campbell, who served with the Army Air Corps in World War II and piloted 40 B-26 Bomber missions in the European Theater, presented a framed flag to the Floyd family as a small token of appreciation for Talmadge Floyd’s sacrifice.

“And so Talmadge, we are gathered here today, still enjoying the sweet freedom that you bought us, with thankful hearts for your selfless devotion to your country,” said Col. Brown as the flag was being presented. “And to Margaret (Talmadge’s sister) and the Floyd family, on behalf of our community and a grateful nation, we say thank you for giving us a patriot like Talmadge.”

Freedom isn’t free. It comes with a price. This Memorial Day, take a few minutes to remember those who sacrificed their lives, like Talmadge Floyd, so that we are able to freely enjoy ours. Without them, we wouldn’t be able to do the things we freely choose to do. The staff at the Cullman Tribune wants to wish everyone a happy and safe Memorial Day – with many more to come.

For a full photo gallery of the event, see http://qrne.ws/mdpp.