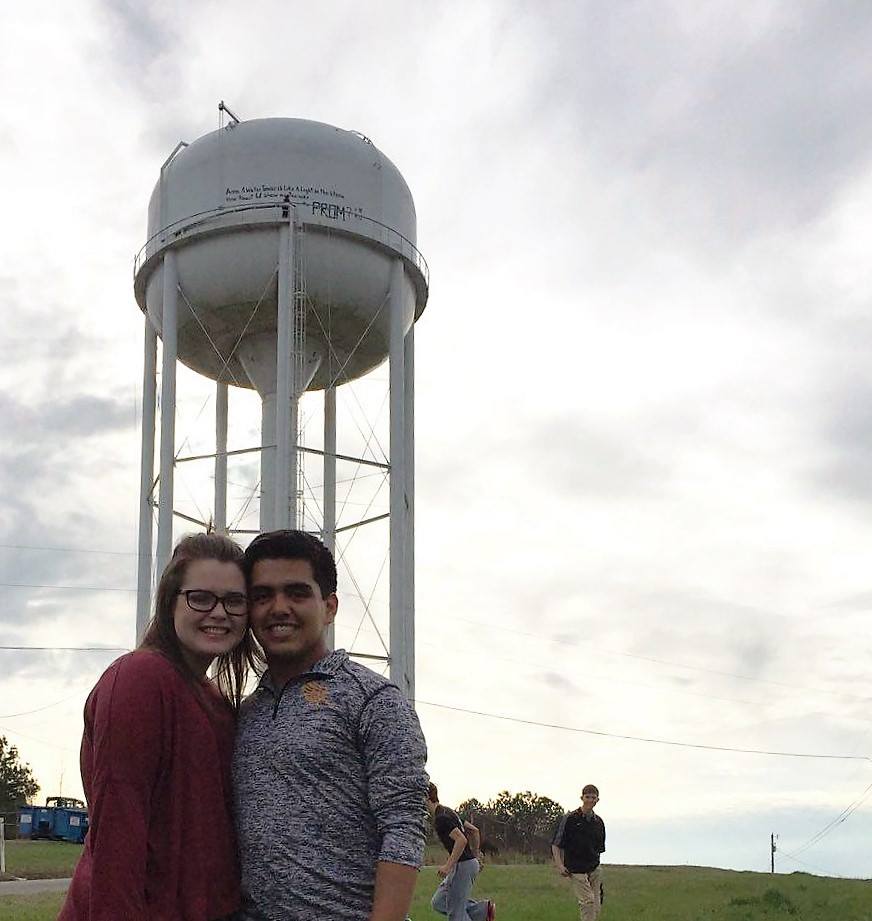 FAIRVIEW – On Friday, Luke Macias asked Anna Hampton to be his date for his senior prom. No big deal, right? It happens in every high school in every town across the country around this time each year. But this was a big deal. Actually quite a large deal! When Macias, 18, asked Anna, 15, he did it by pulling off the most epically romantic fete in, well, certainly Cullman County prom history. He used the Fairview water tower.

Macias called on friends and family to make the special moment happen.

“I was aware that Luke had a special surprise for my daughter Anna,” said her dad James Hampton. “He called me and asked if I could bring her out to the water tower that afternoon to ask her to the prom, (to) which I agreed.”

As for Anna Hampton herself, she says she didn’t have a clue what Macias had planned.

“Absolutely not,” she said. “We had already talked about going together, but he hadn't officially asked me yet. I knew he was going to do it; I just didn't know when.”

Macias tells us how his plan came to fruition. “Me and a buddy of mine, Armando Guiterez, were hanging out on Thursday night. I asked him how I should ask Anna to prom,” he confessed.

Macias says he’d already told Anna his first idea, because at first Anna’s parents weren’t on board with their 15-year-old daughter going to the senior prom.

“Armando said I should use the water tower,” Macias continued. “We heard a song, ‘Water Tower Town,’ by Jason Aldean, that had the first part of the promposal in the lyrics, so we decided to use that.”

Exactly how does one get permission to scale a water tower for such a thing? Macias had that covered. Turns out Guiterez works for the man in charge of repainting that water tower, so Guiterez gave his boss a call on Friday morning and asked for permission to put the promposal on the tower.

“Considering I did not have permission to be up there, Armando spelled out the phrase on the tower using duct tape. It took him about two hours,” smiled Macias.

With everything in place, the only thing left to do was get Anna Hampton to the water tower without her becoming wise to what was happening.

“I called her dad around lunchtime on Friday, asking if he could bring Anna to the tower around 4 p.m. that afternoon,” said Macias. “I asked if he could take a specific way so she could see the phrase when they drove up.”

“Anna had no idea or had any suspicion of what was taking place,” her dad told us. “As we got close to the tower I set the tone by asking if Luke had asked her yet, (to) which she said ‘No.’ At that point we were approaching the tower, so I looked at her and said, ‘Well sweetheart, I believe this is your invitation,’ as I pointed to the question.”

James Hampton says that as his daughter began to read the message on the tower, she began to cry happy tears.

I was utterly shocked,” said Anna Hampton. “I figured he would've had a cute poster with a cheesy pun on it, but it ended up being far better that I ever thought. At one point I was even crying!”

And the most romantic part of all? Macias had had Guiterez add ‘check yes or no’ boxes beside the message!

“At this point, the yes or no boxes hadn't been checked,” said James Hampton. “So when she accepted, Luke had his hook-up (Guiterez) climb up to the top to officially check the yes box, which I thought was the icing on the cake!”

"Anna, A Water Tower is Like A Light in the storm

How About U show me The Way …

As for Anna’s mom, Amanda Hampton, “I am excited for the young couple,” she shared. “They are both wonderful, respectful young people with hearts after God.”

Anna’s father echoed her mother’s happiness. “I have to say I was flattered for my daughter. The smile that this put on her face was and still is priceless. With that said, way to go Luke!”

So, would Anna have said yes if Macias had asked her the old-fashioned way? “Absolutely, without a doubt,” she beamed.

When asked if he had advice for other high school guys who might want to create their own epic promposals, Macias told us, “When you find someone that you'd go above and beyond for, it'll be worth all of the trouble. I know it's not the advice you want to hear, but the advice, the true advice you want is build a relationship with everyone. Eventually you'll find the one that's was worth all of the wait.”

Ahh, young love! Internet fist bump to you, Luke, for your ingenuity! And Anna, we think he's a keeper!

Anna Hampton, a sophomore at Fairview High School, is the daughter of James and Amanda Hampton.

Luke Macias, a senior at FHS, is the son of Hortencia Macias Juarez.

Find the original water tower photos on Facebook at http://qrne.ws/prom.