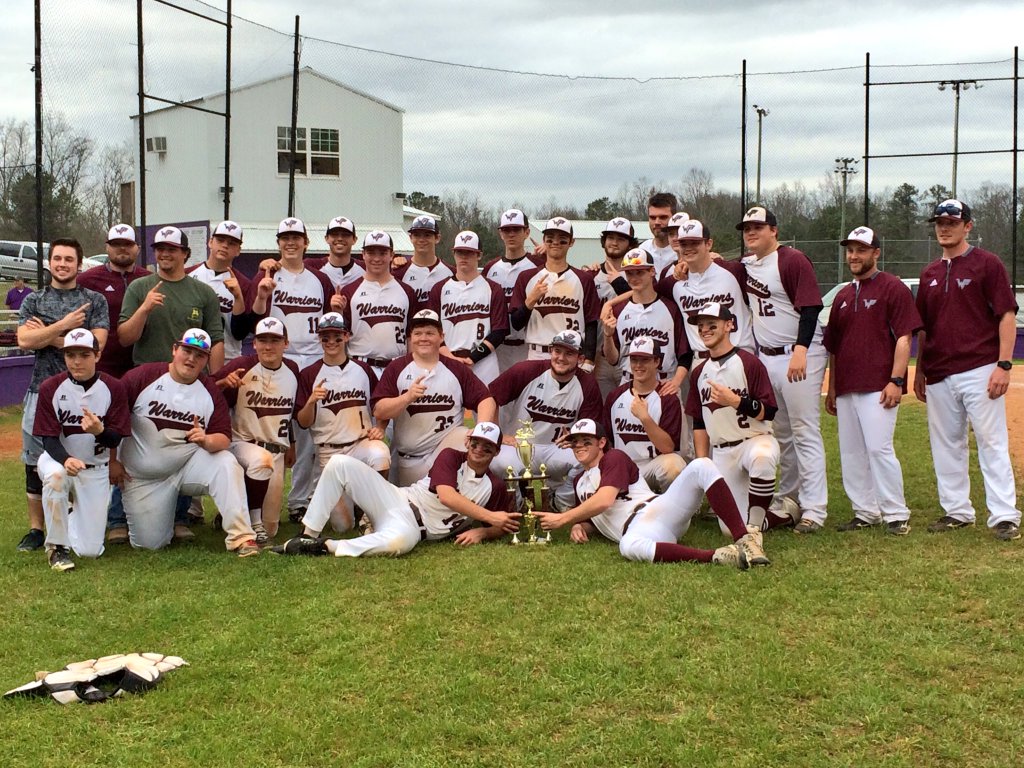 FAIRVIEW – Insurance runs in a baseball game are very important when a contest enters late innings; they served their purpose tremendously for the West Point Warriors Thursday afternoon. The Warriors broke open a tight affair with Fairview thanks to six runs coming home during the sixth and claimed the 2016 Cullman County Baseball Tournament championship title by a final score of 12-4.

West Point was looking for a little insurance in its half of the sixth, leading the Aggies 6-4, knowing Fairview was still in contention to come back when they got to the plate the next inning.

The sixth began great for the Warriors, not so good for the Aggies. Tanner Rusk doubled into the gap in center field, then took third base when the relay throw from the outfield never got to shortstop Preston Moore, resulting in an error.

Hunter Persall gave the Warriors a run when he singled in Rusk to make it 7-4. That was the beginning of West Point getting control of the game, finally.

Kolton Easterwood singled, then Sam Breihn walked to load the bases. Moore, who relieved left-hander Chandler Schnittker, got the next two outs.

Unfortunately, he issued a walk to Tanner Young that forced in a run and another base on balls, this one to Jaxson Garrison, sent Breihn in and the lead grew to 10-4.

Matthew McDonald's ground ball to second turned into an error for Fairview, as Young and Garrison came in and gave the Warriors an eight-run cushion at 12-4. McDonald was thrown out trying to advance to third on the play.

Dave Doss went to the mound for the Warriors, finishing a good performance in which he threw a complete game. He gave up a base hit to Braden Grandstaff with two outs, then got Schnittker to line to left field to end the game at 3:09 p.m.

The time of the championship was two hours, 11 minutes.

Fairview managed four runs against Doss in the first two innings. A balk on Doss was called with Tyler Ball coming in to make it 1-0. Then Clay Lanier flied to left scoring Ragan Ashley.

In the second, the Aggies regained the lead after giving up three runs in West Point's half of the first. Ashley blasted a single up the middle that sent in Jones and Dunn, and Fairview went up 4-3.

But the Aggies could not stay on top. A sac fly by Ryan Smith and a run-scoring double from Levi Allred in the third allowed West Point to go back on top at 5-4.

Rusk lifted a fly in the fourth that was deep enough to score Garrison and extend the margin to 6-4.

Doss shut down the Aggies in the final five innings, allowing them just four hits, and struck out two. He was never in serious trouble as he got stronger with plenty of power left in his pitches by the time the game reached the seventh.

Poe Holmes was charged with the loss. Holmes worked five innings for the Aggies, allowing six runs on nine hits with a pair or strikeouts.

West Point is now 7-1 on the season after getting three wins in the county tournament, two against Fairview. The Aggies drop to 7-7 overall.

Both teams will focus on the start of 5A, Area 14 play next Tuesday. Fairview will play at Lawrence County while West Point heads to Russellville the same afternoon to meet the defending 5A state champion Golden Tigers.