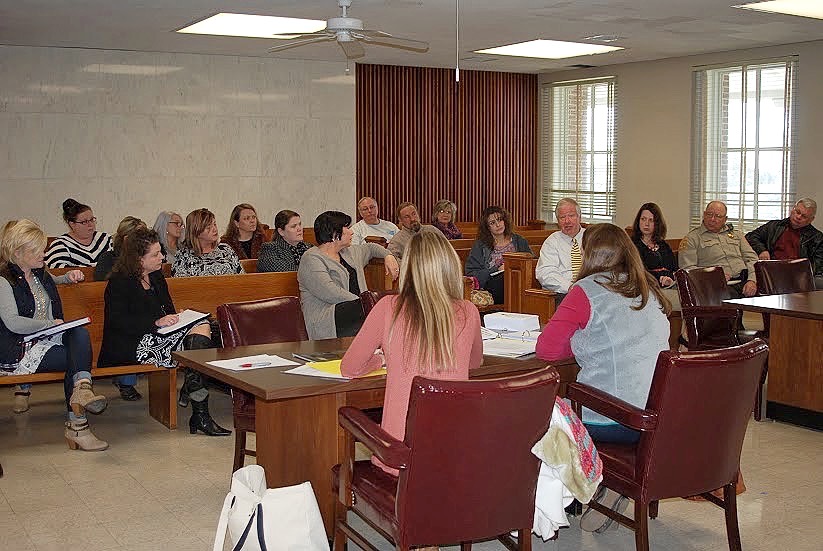 We all know that Internet safety is an issue for young people. Sexting is an issue and it all starts with that. They get them on the hook and then into exploitation.”
Judge Kim Chaney

Human trafficking is a form of modern-day slavery. It is a crime that happens when a person uses force, fraud or coercion to control another person. The person being controlled is forced into commercial sex acts and/or soliciting work or services against his or her will. The average age of entry into the U.S. sex trade is 12 – 14. It is happening all over the world and right here in the United States. Sadly, it is going on right here in Cullman County.

The Task Force met on Wednesday, Jan. 6 to discuss this month’s events, namely the upcoming training session for the public.

“There will be a public training on Human Trafficking Awareness and Investigation on Tuesday, Jan. 26 from 6 – 7:30 p.m. at Daystar Church,” said Kathy Wilson, Cullman County Human Trafficking Task Force chair. “This is where any concerned citizens, the public – anybody can attend. We want everyone to spread the word about this public training, it is very important.”

We are excited to announce Human Trafficking Awareness and Investigation Training! Please make plans to attend! Thanks…

Presenting at the event will be Scott Santoro, who provides training for the Federal Law Enforcement Training Center. He is the senior training advisor for the U.S. Department of Homeland Security’s Blue Campaign. A former attorney, he currently trains state and federal law enforcement on human trafficking.

Because a lot of the victims of human trafficking are teenagers, the Task Force plans to offer the public a class on Internet safety in the very near future.

“That’s how young teenagers get into all this,” said Attorney Andrea Richter. “They may put something online and the traffickers start talking to them. That’s how it happens, how they get them.”

“We all know that Internet safety is an issue for young people,” said Judge Kim Chaney. “Sexting is an issue and it all starts with that. They get them on the hook and then into exploitation.”

Javon Daniel, executive director of Cullman Caring for Kids, spoke to the group about an upcoming addition to his local show, “Kids Matter.”

“’Kids Matter’ is a public service radio program that Nancy (Bryant) and I host every Friday and Sunday afternoon on two different local stations,” he explained. “One show streams on the Internet so it is worldwide. We talk about children and family issues.

“Kathy Wilson is going to be on our show Friday talking about human trafficking,” he continued. “We already decided to add a section to our show each week where we talk about sex trafficking.”

Daniel also announced there will be a public prayer vigil on Wednesday, Jan. 20  at Baldwin Heights Baptist Church. The vigil will last from 6 – 7 p.m. He said that he plans to have all the churches in the county pray in unison for the end to human trafficking during their Wednesday night services as well.

The Task Force says it needs all the help it can get to prevent both children and adults in our area from becoming victims. Everyone is encouraged to get involved. The next meeting will be on Wednesday, March 2, at noon in Judge Kim Chaney's courtroom on the second floor of the Cullman County Courthouse.