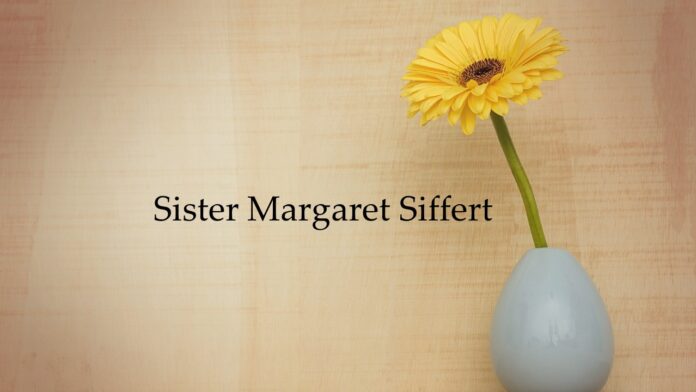 Sister Margaret Siffert, O.S.B., a Benedictine Sister of Sacred Heart Monastery in Cullman, AL, died on Thursday, July 14, at the age of 58, after an extended illness. Sisters and family members kept vigil at her bedside during her final days. Reception of the Body with Vespers for the Dead will be held Monday, July 18, at 4:45 PM in Sacred Heart Monastery Chapel in Cullman, followed by Visitation until 7:30 PM. The Mass of Christian Burial will be held on Tuesday, July 19, at 10:00 AM with Abbot Marcus Voss, O.S.B., presiding. Interment in the monastery cemetery will follow. Born in 1963 in Eunice, LA, to Herschell and Verda Mae Siffert, Margaret was baptized at St. Anthony of Padua Catholic Church in Eunice. After earning a bachelor’s degree from the University of Louisiana at Lafayette, Margaret embarked on a lengthy career in Human Resources administration. After lovingly raising her two children, Margaret began to discern a call to religious life, discerning with the Benedictine Sisters of Cullman, Alabama. Margaret entered the monastic community as a Postulant in August of 2020. In August 2021, she entered the Novitiate, becoming Sister Margaret. After a few months as a Novice, Sister Margaret became ill, eventually receiving the diagnosis of a rapidly advancing terminal illness. With special permission from the Vatican, Sister Margaret was allowed to make her Monastic Profession early in light of her terminal illness. On Sunday, April 24, Sister Margaret made her Perpetual Monastic Profession.

During Sister Margaret’s nearly two years in the monastic community, she was a joyful and prayerful presence. Her devotion to prayer was ever-present. Deep faith in God’s ways and God’s call marked her journey. During her illness, Sister Margaret’s faith was an anchor. Sister Margaret was preceded in death by her parents; a sister-in-law: Tammy Siffert; and a niece: Gretchen Siffert. Survivors include her children: Catherine Walker (Billy) and Matthew Guillory (Tayler); grandchildren: Emma, Adelyn, and Wyatt; siblings: Mary Siffert Balleza, Linda Siffert Hulme, John Siffert, James Siffert, Dolores Siffert Coffey, Robert Siffert, Paul Siffert, and Christopher Siffert; her Benedictine Sisters; and extended family and friends. In lieu of flowers, memorial contributions may be made to the Benedictine Sisters of Cullman, AL, 916 Convent Rd., Cullman, AL, 35055.