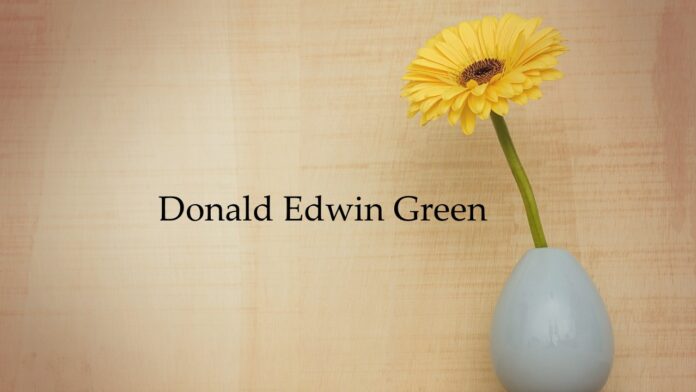 Donald “Don” Green, 87, passed away on July 4, 2022. He was born in Cullman to Clarence Green and Alice (Latta) Green. He joined his brother Onis and his sister Dorothy. Donald grew up and attended school in Cullman graduating from Cullman High School in 1953. He attended API/Auburn University for his undergraduate degree, The University of Alabama for his master’s degree, and earned his PhD from Texas A & M University. Donald always had a passion for sports, physical education, and lifetime healthy living which was reflected in his studies.

Donald attended Auburn University (Alabama Polytech Institute) and played Freshman Baseball. He then enlisted in the Air Force and spent two years on active duty. While serving in the Air Force Reserves, Donald attended Saint Bernard College and played on the baseball team. While a student at Saint Bernard, Donald was asked to teach PE and coach the Junior High basketball team at Baileyton. As head coach, he took the team to their first County Championship. This was one of his proudest achievements and he kept in touch with his team until his passing.

While coaching and teaching at Baileyton, Donald met the Girls’ PE teacher at Fairview Junior High. Donald and Dean Drake began dating and when he transferred back to Auburn for his final years of college, Dean would make the drive from Fairview to Auburn to attend social functions at the Sigma Pi fraternity, for which Donald was elected President his senior year. Donald and Dean were married on July 11, 1959, at First Baptist Church in Cullman. Dean shared Donald’s interest in healthy living and sports.

A year later, in August, they began their family with the birth of their son Drew followed 3½ years later by son Jonathan. Eight years later they received a Texas blessing with the arrival of their daughter Donna.

Donald’s first job as a teacher was at Cullman High School. He taught physical education and health. During this time, Donald started and coached the Cullman Swim Team, introduced soccer to his PE classes, and coached football and basketball.

Donald moved to Birmingham Southern College after earning his doctorate at Texas A&M. He served as Athletic Director and Head of the Department of Health and Physical Education.

As a teacher and coach Donald encouraged many young people to pursue an active and healthy lifestyle. Besides his love of teaching, Donald felt great civic pride in his hometown. Encouraged by Dean, he began 27 years of public service. Donald served on many local committees and boards. In 1978, he became a member of the Cullman City Council and ended his public career with two terms as Mayor of his beloved hometown.

Donald had a passion for golf and made many lifelong friends while playing. He also passed his love for the sport on as coach of the Cullman High School golf team. Donald was still an active golfer even in his later years, usually shooting better than his age. His score of 64 during a tournament at Terri Pines is still talked about around the golf course.

Donald was predeceased by his parents: Alice and Clarence; his sister: Dorothy; his brother: Onis; and his daughter: Donna. He leaves behind his sweetheart with whom he would have celebrated their 63rd anniversary: Dean Drake Green; his sons: Drew and Jonathan (Sherry); his grandchildren: Thomas (Babs), Anna, Cole (Leslie), Madison; and great grandchildren: Eliot and Quinn.

The funeral service will be held at Cullman First Baptist Church on July 7, 2022.

Visitation will begin at 9:00 am followed by the service at 10:00am. There will be a graveside service for the family.