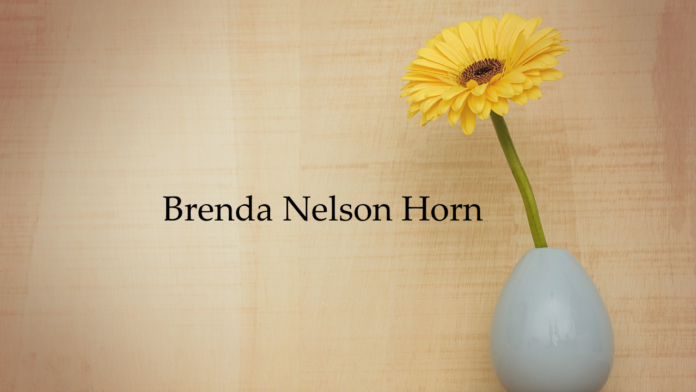 Brenda Nelson Horn died on May 9, 2022 in Cullman, Alabama. She was 79. Brenda was an amazing person who lived life to the fullest. She was extremely intelligent, funny, opinionated and the most caring and loving person to all who were fortunate to have her in their lives. She was the ultimate mentor for family, friends and colleagues.

Brenda was born on July 16, 1942 in Crane Hill, Alabama to Fred and Doris Nelson. She was the oldest of four children. After being double promoted and graduating from Cullman High School at age 16, she went on to attend St. Bernard College where she studied Finance and Accounting.

In 1960, Brenda was married to Darell Mullaney and they started their family immediately. She was the proud mother of Mike, Scott and Matt Mullaney. Throughout their union, they lived in Jacksonville, Florida, St. Petersburg, Florida, Birmingham, Alabama and eventually back to Cullman, Alabama in 1972.
Brenda raised her sons in Cullman until 1982 when she moved with her second husband to Orem, Utah.

After two years in Utah, they moved briefly to Kentucky and then to Shelbyville, TN where they started a self-storage business. Brenda was an expert in accounting and finance which contributed to the business becoming a thriving success. She lived in Shelbyville until 1996 when she returned to her hometown of Cullman, which is where she would remain for the rest of her life.

In 1997 Brenda began working for the Cullman Industrial Development (ID) Board. She became the record keeper for many functions including financing, contracts, legal documents, budgets and invoicing. Brenda loved working for the ID Board and developed close friendships during her 25 years there. She considered those she worked with as extended family.

Despite her many accomplishments, Brenda’s true passion was her family and the many close friendships she developed over the years. She loved her three sons with all her heart. Her 10 grandchildren and eight great-grandchildren will tell you she was the best grandma anyone could possibly have. She was just as caring for her siblings Diane, Maxie and Bruce, her many nephews and nieces, her cousins and all other extended family. She was a caregiver for her parents at the end of their lives and always made her parents proud. Brenda also had an enormous network of close friends.

In lieu of flowers, gifts in memory of Brenda Nelson Horn may be directed to support cancer research through the American Cancer Society (https://amp.cancer.org/) or to St. John’s Evangelical Protestant Church (https://sjepc.churchcenter.com/giving).