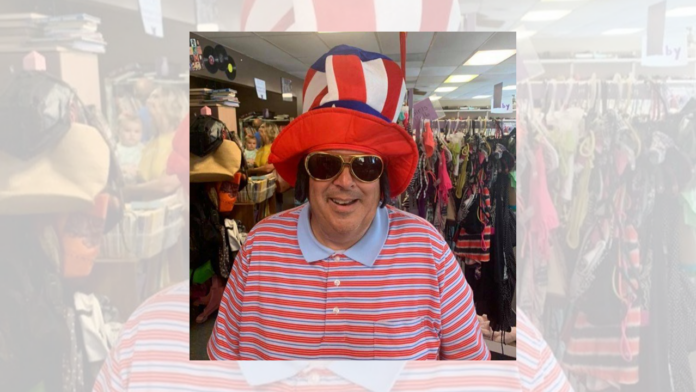 CULLMAN, Ala. – In its series that invites the community to remember its loved ones lost to COVID-19, The Tribune shares memories of Robert Dale Squires, known to many as the friendly face and hat expert at Victoria’s Hope Thrift and Treasures in Cullman.

After she read the official obituary, Squires’ niece Maegan DiLoreto Taylor decided to share her own via social media, and the Squires family gave permission for The Tribune to print it here.

Taylor wrote of her uncle, “He taught me more than you could imagine about patience and how to find joy in the little things. I still can’t believe I won’t get any more phone calls from him (usually in the middle of me eating dinner) asking ‘Hey Maeggie, what day does that new movie come out in theaters?’

“Robert Dale Squires had a personality that was larger than life, so Jesus decided it was time for him to come Home on Monday, January 25, 2021, at the age of 55.

“Robert, also affectionately known as Robert Dale, Bob, Bobby, Roberto, and Robert Dale-y, was born on July 21, 1965, in Charlotte, Michigan. He could make friends with anyone and happily did so in all the cities he lived in, which included Eaton Rapids, Michigan; Brevard, North Carolina; Minden, Louisiana; Dubberly, Louisiana; Cowpens, South Carolina; Crossville, Tennessee; and finally Cullman, Alabama.

“He was well known for his smile and ability to bring joy to others, just as much as he was for his regular bouts of happy tears. He worked tirelessly to coax a laugh out of even the most unwilling participant, usually through corny jokes, funny sweaters, or random bursts of song and dance. He also had an uncanny ability to dress up as any number of inanimate objects, usually in support of local businesses, such as hot dogs, cell phones, shampoo bottles, and occasionally the Statue of Liberty. All of these he performed while listening to pop music on his Walkman.

“Robert’s patience knew no bounds, and he always saw the best in situations. He didn’t let you forget when his birthday or Christmas was coming up, but he never complained and he was always genuinely willing to help others. In his free time, he liked to solve word search puzzles and ride his bicycle around town, constantly stressing out many of the people in his life who love and care about him. One of his favorite hobbies was calling his friends and family to chat or show them his latest find on FaceTime. He had a knack for calling at the most inopportune moments, though his poorly timed calls and long voicemail messages will be missed dearly.

“Robert found a second family with April and Craig German and Victoria’s Hope in Cullman, where he made it a personal mission to try on as many silly hats as possible. His extended second family also included the team at Flourish of Cullman, where Robert was an active member, and Desperation Church, where he volunteered on the parking team.”

Squires found his way to Victoria’s Hope through Flourish of Cullman’s community volunteer program. At the charitable thrift shop, he worked with manager Craig German and founder April Bowen German.

April German wrote of her shop’s customer service and headgear authority, “Robert came to us through Flourish and he quickly became a regular name in our house for a while. All I would hear out of Craig was ‘Man, I can’t wait for you to meet Robert.’ And I’m so glad I did. He immediately became a member of our family, even going to support my son at his football games. He looked forward to those Friday night lights.

“He taught me so much about life. He loved with all of his heart, knew no evil, loved life to the fullest, and was excited every day just to start a new adventure. And if there is one thing that we can take out of our loss, is to live more like him. I’m sure we all would agree this world would be so much better if we did. Victoria’s Hope will never be the same without him, and he will always be a part of Victoria’s Hope.”

Lyndsay Long, who worked with Squires at Victoria’s Hope, added, “We’ve all experienced a great loss. To anyone who met Robert, it was an experience in itself. So full of life, love, goofy, and the best hugs! I don’t really know that there are words to truly express the experience, but he was definitely a once in a lifetime soul. He never met a stranger, he never had a bad day, but most of all he loved everyone every day! The world needs more Roberts!”

After news of Squires’ death was posted, Victoria’s Hope customers shared their thoughts on the shop’s social media page:

“I loved his enthusiasm. He had fun bringing attention to the store when he was by the roadside. I always gave him a couple of honks as I drove by.”

“Robert was a light and a blessing to all who met Him! He had an honest love and concern for helping others always. He was most definitely someone you wanted to take the time to stop and speak with. He has lightened my spirits many times, when I was heavy hearted. I am so proud to have known him! He will be missed by many!”

“Robert was such a shining light. I will miss seeing him riding his bike around Cullman.”

“Heaven has truly gained an angel. Robert will truly be missed. His smile was contagious. The world definitely lost a sweet soul.”

“He was such a friendly soul. Always the clown. I missed seeing him there (at the store). He loved to match the shoes up.”

“He had the most infectious smile, the warmest heart and the kindest soul. He will definitely be missed.”

“I will really miss him. He was always so happy to help no matter what. There will never be another Robert.”

“A funeral service was held at Moss Service Funeral Home on Thursday, January 28. In lieu of flowers, donations may be made to one of Robert’s favorite places: Flourish of Cullman, Victoria’s Hope, or Desperation Church.

“But if you really want to honor Robert, have a Double Quarter Pounder with Cheese, a Diet Mountain Dew, and if anyone asks what you’re doing, tell them you’re just takin’ it easy.”