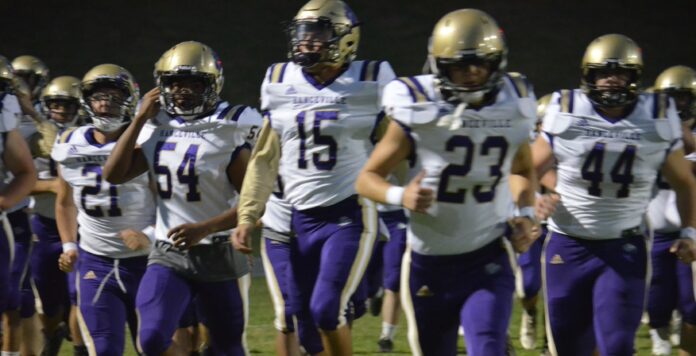 ELKMONT, Ala. – Hanceville hit the road for its regular season finale against Elkmont Friday night and after falling behind early, the Red Devils began to climb back and were eventually able to pull ahead of the Bulldogs and win it 45-36.

Two quick touchdowns gave Hanceville a 14-0 lead in the opening quarter but Elkmont was able to cut the deficit to 14-6 by the start of the second. That’s when the Bulldogs were able to create some separation. Two more scores made it a 30-6 game at one point in the second quarter but the Red Devils managed to get on the board one more time before the half to cut the lead to 30-12 at the break.

Elkmont’s momentum continued into the third quarter and the Red Devils scored to make it 30-18 early in the third. Another third quarter touchdown cut the deficit down to 30-26 and by the start of the fourth quarter, Elkmont had rallied to take a 38-36 lead.

Another Red Devils touchdown put them in front 45-36 in the final frame and Hanceville was unable to get back on the scoreboard, falling to Elkmont on the road 45-36. The loss caps the Bulldogs’ regular season at 2-8 with several players set to return next fall for Hanceville.