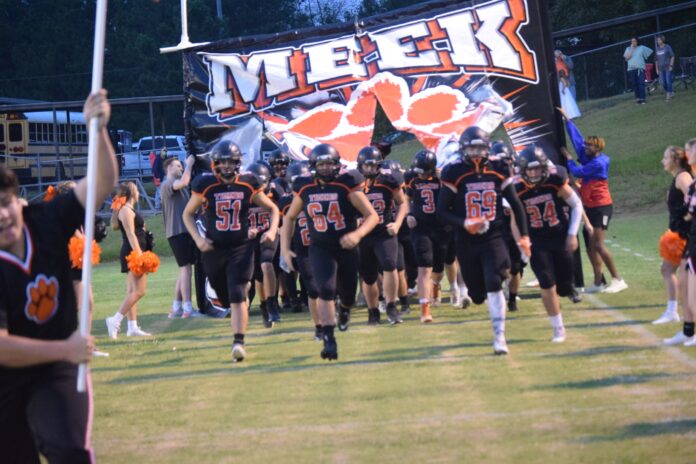 ARLEY, Ala. – After collecting a huge win over Lynn last week, the Tigers returned home Friday night the host a strong Pickens County team. Meek hung with the Tornadoes early, but they were eventually able to create separation and pull away to defeat the Tigers 38-14.

Meek struck first in the game and scored early in the opening quarter to take a 6-0 lead. However, Pickens County answered with a touchdown of its own to tie the game and just before the start of the second quarter, the Tornadoes found the end zone again to take a 14-6 lead.

Pickens County got on the board again early in the second to go on top 22-6, but the Tigers bounced back with another score to cut the deficit to 22-14. Unfortunately, the Tornadoes were able to wipe out that momentum with another touchdown just before halftime that made it a 30-14 game at the break.

Neither team was able to get on the board again in the third quarter and the Tigers went into the fourth trailing by just two scores. However, Pickens County was able to tack on another touchdown in the final frame to pull ahead 38-14 and the lead became too much for Meek to overcome.

The Tigers fall to 1-7 after the loss and they’ll be back on the road next week to face Berry in another regional showdown.