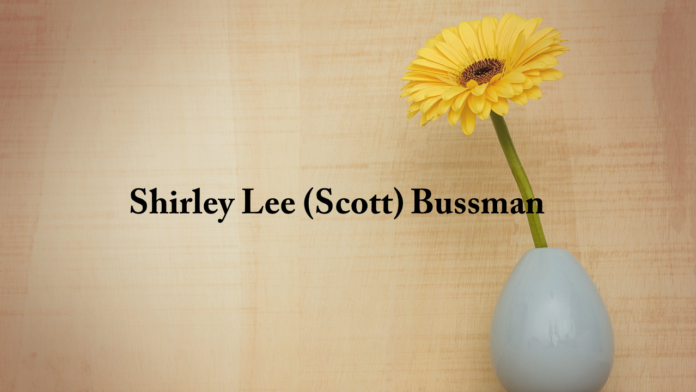 Born Nov. 30, 1928 in Lincoln, Nebraska to Lee A. and Laura (Gade) Scott, she grew up during the Great Depression and the Second World War. Like others of her generation, she learned the values of hard work, frugality, determination, and perseverance and carried them throughout her life. She was gifted faithfulness and a lifelong keen intellect. She was a voracious and varied reader. Her legendary impatience, however, was all her own. These traits, for better or worse, she passed on to her children.

A lifelong Lutheran, she was baptized Jan. 1, 1930 in the county jail. Her Grandma Corda A. Scott was serving out the term of her late husband, Sheriff Isaac Newt Scott, in Seward County, Nebraska. The back room of the Sheriff’s residence also served as the jail, bars and all. It was an inauspicious beginning for a good and faithful servant of the Lord. Moving to Denver, Colorado, at an early age, she was later confirmed at St. John’s Lutheran Church in Denver April 2, 1944, with the verse from Colossians 3:17, “Whatsoever you do in word or deed, do all in the name of the Lord Jesus Christ, giving thanks to God and the Father by Him.”

She later served as Secretary at St. John’s and at St. Paul’s Lutheran Church and School in Cullman, Alabama. In the late 50s and for most of the 60s, she served as Secretary to the President of the Southern District of the Lutheran Church, Missouri Synod, welcoming groups of Lutheran ministers, black and white, into her home in New Orleans, Louisiana. She experienced the ugliness of segregation and its defenders throughout Alabama, Mississippi and Louisiana partially recorded in Richard O. Ziehr’s book, “The Struggle for Unity.” She also served as compiler for the family life research project, “Engagement and Marriage,” by Rev. Paul G. Hansen and Dr. Oscar Feucht.

In 1966, she sent her two oldest children, ages 12 and 14, by Greyhound bus to Cullman to start public school and followed one week later with the three younger children, ages 3, 5 and 10, in an old Mercury. Experiencing engine and radiator trouble in Birmingham, the mechanic asked her how far she still had to go. When she replied, “Cullman,” he told her she would never make it. Make it she did, and Cullman became her home for almost 55 years. She went to work at St. Paul’s Lutheran Church, bought her family a house, reared her five children with the support of members of the church, such as, the Vogels, Woodards, Apels, Buettners, Barneses, Hamners, Goellers, Dahlkes, Harrises, Lewises, and Hermetzs, helped them earn their college and, in some cases, professional, degrees, and watched them become productive and successful members of their communities.

She became the first female at St. Paul’s to hold positions of authority. For decades, she taught Sunday School, Bible class, and Cradle Roll. She initiated and taught the Parents/Twos Sunday School class in which parents, mostly fathers, attended with their children.

Upon retiring from Smith-Gray Insurance Agency after 35 years, Ms. Bussman remained active for many years by mentoring children at Vinemont Elementary School each week, tutoring Hispanic children in Primary School, and reading stories to 3- and 4-year-olds at St. Paul’s. She served as an officer and member of the church’s Ladies Aid and Sunshine Club.

She treasured the cards and letters from her grandchildren, the wonderful pictures of them and her great grandchildren as they grew day by day, the visits from them all, especially for her 90th birthday celebration, and the innumerable telephone and Facetime or Skype calls which she never, ever mastered. She dearly loved them all.

Shirley Bussman was preceded in death by her parents Lee A. Scott and Laura (Gade) Scott; her brother Jimmy Scott; and her daughter Kaye Crowe Bussman.

Funeral services will be held Tuesday, May 26, 2020 at 2 p.m. from St. Paul’s Lutheran Church of Cullman with Rev. John Mark Bussman officiating. Visitation will precede the service at the church from noon-2 p.m. Burial will be at Cullman City Cemetery.

In lieu of flowers, the family requests contributions be made to St. Paul’s Lutheran Church and School.