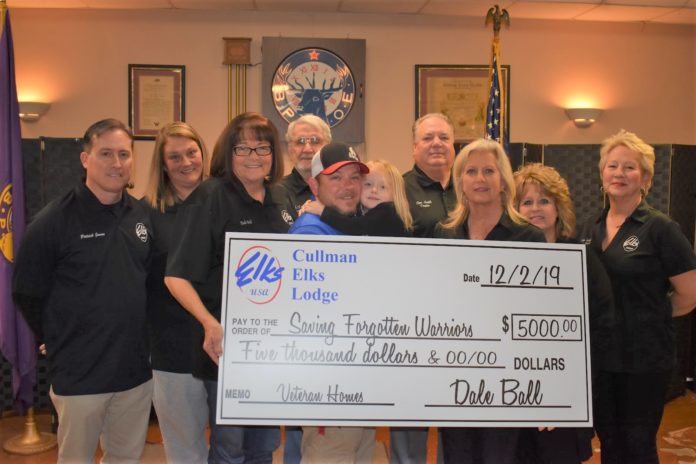 Cullman Elk Trustee Gwen Parker told The Tribune, “The Elks are very involved in helping veterans, especially homeless veterans. Jeremy had sent me some information on the house that had been donated on a 99-year lease to help homeless veterans. And, of course, he was excited, and he called me and told me about it, and was excited. I, naturally, would like to see our lodge help, because I think it’s the most awesome thing that Cullman County’s going to be able to have a home for homeless veterans. I brought it up to the Board of Directors here at the lodge, and we voted unanimously to support them with $5,000, which is about half of what it’s going to cost to do the two duplexes. So that way, we can sponsor one all by ourselves. That will pay for all the materials. He’s got the labor; we’re going to help some with the labor.

Continued Parker, “We’re going to hold a shower, per se, and we’re going to supply that home that we’re sponsoring with all the needed supplies, some furniture- like dishes, towels, bedsheets, things of that nature. And then we’ll have a food drive, too, to stock the shelves, so it will have plenty of food when the veterans move in. We wanted to be able to have one that we could just try to do everything that we could, and the $5,000 is the initial project, and then we’re following up with the shower and stocking the shelves, and all that.”

After receiving the check, Hogan said, “To me, there are no words to explain. I guess the support, not just from the community but from the Elks, to get this right here is confirmation that God’s working His magic. And to me, it happened so quick: as soon as I found out I had the property, I called Gwen, and she, within 24 hours, told me they had money for us to start with it. So, to me, the community wants it; you can tell. And this right here, having the Elks step up to be one of the first, they actually are the first to cut us a check to support the housing, I think it speaks wonders to not only the membership or the Elks Club itself- the lodge- but it speaks wonders to the community, because Elks members are the community.”

Cullman Elks Lodge President Dale Ball told The Tribune, “The veterans are near and dear to many people, especially the Benevolent Protective Order of Elks. Last year alone, the total Elks contribution to veterans was $58 million and our members served more than 677,000 veterans. The Cullman Elks have hosted the (Cullman County) Veterans Day Celebration the past several years, feeding approximately 1,000 veterans and spouses. The Elks have pledged millions to help end veterans’ homelessness, and this donation was partly made from a grant from our Elks National Foundation and our Cullman Elk members.  We are so excited to be a part of this for the veterans in our community. ‘Elks Care & Elks Share.’”

Hogan added, “I’d love to see other businesses jump on board and try to make this happen. We’re offering sponsorships: names on the buildings and stuff like that in honor of the sponsors, so there’s plenty of benefit for those that are willing to get involved, too.”

At any given moment, according to Hogan, an average of 457 veterans are in a state of homelessness in Alabama, and up to half of other veterans in the state regularly live on the verge of losing their homes for various reasons. When he and his wife Julie May Hogan started SFW three years ago, they were getting two to three new calls a week about veterans in Cullman County who needed help. As of Monday, he reported, that number has been whittled down to one or two per month, as the couple gets vets into hotels or other lodging including, at times, their own home.

One piece of a bigger plan

The veterans’ home in Hanceville, which will open officially Dec. 20 with three residents and a capacity of up to 12, represents the initial phase of a much larger project that Hogan hopes to see come to pass in Cullman County: a three-campus veterans’ transition center that will get veterans from across the state off the streets, provide them training in occupational and life skills and give them a foundation point from which they can successfully transition back into civilian life. The transitional program will last for up to 2.5 years with another 2.5 years of ongoing support, for a total of up to five years of assistance.

Said Hogan of the issue of veteran homelessness and his plan to combat it, “I really, truly believe that, if they come out and have the proper educational training and prior training to transitioning back to civilian life, that we can take a huge chunk out of that problem, and change a lot of what happens right now.”

Hogan hopes that, if the program proves successful for veterans, it can become the pattern for other programs serving the entire spectrum of America’s homeless.

Said Hogan, “If we can nail this down and get this program going right, we could pretty much make this a cookie cutter program and do it for any homeless person whatsoever. I’ve done it on the ‘cheapest/best quality’ aspect, if you will. I’m trying to come up with the best-case scenarios and the best course of action with the least amount of economic impact, cost-wise, for us to do it. And this right here is it. If I can do this right here: we get this up and running and it’s successful for a year or two, then I would like to present it as a complete homeless program, not just for veterans, because there is a lot in this program that you can learn, even not being a veteran. It benefits, anyway.”

At the end of the interview, Hogan took a moment for a personal note about his wife, saying, “She’s been a part of it, too, you know. I mean, this has been a huge sacrifice for my wife and my kids: I mean three years, it has been seven days a week, 24/7 Saving Forgotten Warriors. My family’s very tough, and I really do appreciate their steadfastness to help me keep going- her motivation and her hard work, because she works full-time and then comes and helps me.

“It takes a full army to do what we’re doing. It’s crazy that her and I have been doing most of it. You have a few people in the background that do a lot of work for us on paperwork and other stuff, but her and I, we’ve bent over backwards every weekend for events, and every weekday we do work. And I mean, it’s kind of crazy that everything revolves around Saving Forgotten Warriors now. I mean, my wardrobe is nothing but Saving Forgotten Warriors! It’s kind of crazy.”