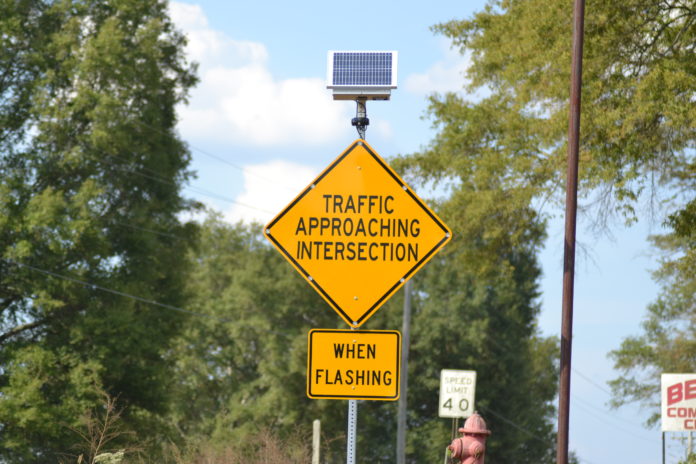 BETHEL COMMUNITY, Ala. – The Alabama Department of Transportation (ALDOT) on Tuesday morning installed a new safety system at the dangerous intersection of U.S. Highway 278 and County Road 831 in the Bethel community of west Cullman County. The system uses radar to detect approaching vehicles on Hwy. 278, then alerts drivers on both sides of CR 831 using high visibility signage.

ALDOT spokesman Curtis Vincent told The Tribune, “Basically, what you’ve got are signs on County Road 831 north and south bound, whichever way you’re approaching 278, that light up and tell you when traffic’s approaching on 278. And it uses radar detection to sense traffic as it’s approaching that intersection, and then it lights up on the sign that says ‘Traffic approaching when flashing.’ So it alerts the motorist on the side road.

“You know, even though they may not see traffic on 278 because of sight distance and the vertical curve, that radar detection will pick up a vehicle as it’s moving and these signs will come on.”

According to Vincent, drivers are already reporting that the system is working well, and also that drivers were stopping at the intersection to thank the workers who were setting up the equipment.

This is the first such system installed by ALDOT anywhere in the state of Alabama.

Said Vincent, “This is the first time we’ve utilized these devices, and I think it’s an ideal application for this location; it’s exactly what these are intended for.”

Within the next two weeks, ALDOT plans to return to the intersection to install a similar system to alert drivers on Hwy. 278 to approaching traffic on CR 831.

Vincent still advised, “There’s no catch-all solution. People still need to slow down, be cautious and be aware of their environment. But this will go a long way, I think.”