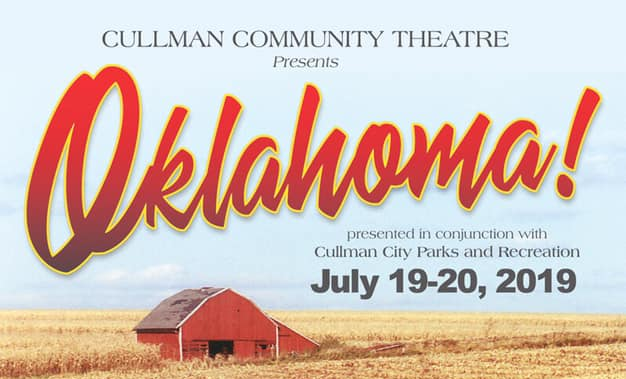 CULLMAN, Ala. – Building on the success of last year’s “The Music Man,” Cullman Community Theatre returns this week with “Oklahoma!,” the very first Broadway musical by the legendary team of composer Richard Rodgers and librettist/lyricist Oscar Hammerstein II. The story follows the simultaneous courtship of Oklahoma farm girl Laurey (played by Sarah Jane Skinner) by rivals Curley (Tyler Skinner), a cowboy, and Jud (Nick Shabel), a farm hand, in a competition of ever-increasing intensity.

Wayne Cook, who co-directs “Oklahoma!” with Melva Jackson, talked to The Tribune about the production, which shifted over the weekend from its regular rehearsal site at the Cullman Civic Center to the performance venue at Cullman High School:

“It’s gone well; (we’ve) got a lot of good folks involved, and I think they’ve had a good time.”

Cook said, “The exciting part is that people are going to love the old, the classic, songs that they expect from ‘Oklahoma!,’ and they’re done really well in this production. You know, the things that they’re familiar with from maybe watching it in former situations; you know, they’re going to remember those songs. And, of course, they’re classics, and they’re done just as they will always be known and remembered.

“That’s the wonderful thing about this performance, is that the music is very much an important part of ‘Oklahoma!,’ obviously, and has probably made it such the classic that it is. And anything from Annie doing her song entitled ‘I Just Can’t Say No’ to the classic ‘Oklahoma!’- the song, which is done traditionally with a reprise, because it is such a classic song that you do it all the way through, and then you do it again for a little bit! It’s considered a reprise, and so it’s written into the play. So, we have that.

“The music’s been just really beautiful. A lot of people have put a lot of energy and time into planning the sets and the costumes, and we feel like all of those details are coming together really well.”

Credit where credit’s due

Cook talked about some of the people and groups who have contributed to the efforts of Cullman Community Theatre:

“You know, we’re appreciative of (Cullman Parks, Recreation and Sports Tourism/CP&R) and their willingness to trust us in these ventures, because sometimes these kinds of ventures are expensive, and they’re kind of risky at times, but they’re so worth it for our community.

“It’s such an important element in this community. With so many things that are going on with so many things being done in the area of commerce and business, and thriving downtown, and business just booming, the arts are just a huge part of us becoming the community that appeals to the people we’re trying to reach out to. I just feel like it’s a huge thing, and I think that CP&R is doing the right thing by supporting an organization like this and partnering with Cullman Community Theatre and the city and supporting it.

“I want to tip my hat to them and to (CP&R Executive Director) Nathan (Anderson) and his crew, because they have stepped out. They’ve trusted us with this. And I know that, at times, theater work looks lofty, but it is so worth it, you know, it is so important. I hope that will continue: that relationship and that working, because it would be impossible for us to do this as a community venture without CP&R. There would be no way that we could accomplish it.”

Cook also commended key players in planning and developing the production. Jackson, a retired theater educator with tremendous experience as an acting coach, who once lived and taught in Oklahoma, where stage productions of this show are common, co-directs many parts.

Said Cook, “She knows this show up one side and down the other and has directed it before; we have co-directed in a lot of ways. I’ve given her a lot of responsibility and allowed her to do a huge amount. She just knows a lot of things that I didn’t know, because I haven’t directed it before. She’s been fabulous, and it’s been great to work with her. I’ll tell you: she’s a real asset to this community in the area of the arts, and I’m hoping that we can continue to use her and she can have an important part in community theater down the road.

“And then, Sarah Jane Skinner this year- she was our star last year- and then this year she ended up being in the show again, but she’s also directing the music. She’s our choir teacher at the high school (Cullman High School), and I’ve worked with her for years on the productions. She directed the music with her husband Tyler, and they’ve done a great job with the music.

“I need to give all them credit for helping us with so many things and being so involved in this production.”

Sarah Jane Skinner and her husband/co-director Tyler Skinner both have roles in the production.

She told The Tribune, “We have both had a great time working on this show. We both spend so much of the year only on the director’s side of the table that we really love the chance to perform ourselves. We enjoy working in rehearsals with Wayne Cook and Melva Jackson, as well. They are a wonderful team! We think everyone who comes will enjoy this fun, classic show, and we hope that community theater continues with strength in the coming years!”

Cook said, “We hope people will come out and support it. Coming out to see ‘Oklahoma!’ is a vote toward continuing supporting the arts in this community. You may say, ‘Well, I’ve seen ‘Oklahoma!’ before; I don’t need to see it again.’ Well, yeah, you do; you need to come out and support ventures like this, because when you do that, it opens the door for there to be more.

“The community needs to get behind these things and say, ‘We want to see this in our community. We want to be a thriving community that supports the arts.’ And, all around us, there are tons of little communities that are doing every bit of what we’re doing, and we just need to be mindful of that and supportive.

“It’s going to be a good show, and it’s going to be quality. We’re real committed to producing a quality product. They’re not going to come and see something that they’re going to be disappointed with, but I hope that they’ll come out just because they also want to support and undergird the community effort.”