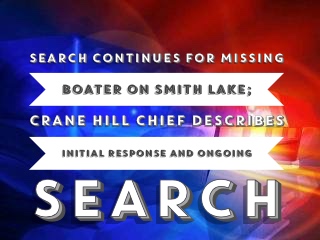 SMITH LAKE/CRANE HILL, Ala. – On Friday, the search continued for a boat passenger missing since a two boat collision on Smith Lake Thursday evening. The incident, which occurred just west of Crane Hill across the county line in the Winston County portion of the lake, injured multiple other boaters as well.

Early reports included the sinking of one of the boats and a third boat involved, but a local fire chief on the scene maintains that only two boats were involved and that both are still above water, though one capsized.

On Friday afternoon, Chief Brandon Williams of the Crane Hill Fire Department, which was the first department to reach the scene, talked to The Tribune:

“Initially yesterday, the call went to Arley Fire Department on the other side of the lake, and I was listening to them.  And, at the request of them, we were dispatched to Wren Rd. (in Cullman County, but the closest access road to the lake), which (an accident victim) was actually calling from; so we had the first units on the scene.

“We triaged and treated nine people on the dock, transported two out of those. And after we got all of them triaged off of the boat that had capsized, we went back and got the other patients on the other boat that was not in the water.”

According to the Crane Hill Chief, the capsized boat was towed to the Cullman County side and secured.

“So Arley FD, along with Crane Hill, obtained a pontoon boat from a passer-by, from a resident down this way. We had a couple of other residents in boats helping us out last night. And then we began doing shoreline searches and all for the missing person out of the boat.”

“And then today–we stopped and called off all searches last night, went home, and basically rejuvenated I guess, because we couldn’t see or anything. And today, we’ve got Crane Hill’s in the lead.  We’ve got the Cullman County Fire boat out here with us. I think they’ve got some members from two or three different departments manning that. Crane Hill’s got a couple of personal boats in the water, manning those. ALEA’s down here, the Sheriff’s department’s down here from Cullman County with a couple of divers. We’ve also got a couple of divers from the Smith Lake Task Force, and their boat is down here, as well.

“And we’re still just doing some searches, just trying to find–pinpoint–where the person might be, and go from there.”

Williams reported that the Arley FD rejoined search efforts Friday, joined by the nearby Helicon FD.

“ALEA Marine Patrol Troopers are investigating a two boat crash that occurred on Smith Lake Thursday night. The crash occurred in Rock Creek at approximately 10:00 pm. There were 5 people injured, 4 of them were transported for medical attention. The severity of the injuries is unknown. There is one person still missing. Search efforts were suspended at 1:00 am. They are resuming this morning with multiple agencies assisting.”

A member of the Arley FD reported that another boat accident with two injuries occurred early Friday afternoon near the Corinth Recreation Area, between Double Springs and Houston.