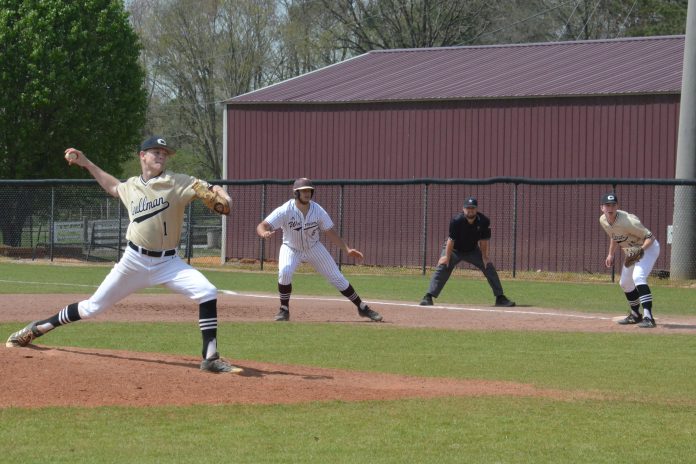 WEST POINT, Ala. – After taking on Decatur in a pair of area games last night, the Bearcats returned to West Point Friday for a doubleheader with the Warriors. West point took a 1-0 lead in the first inning of game one, but Cullman managed to build a 5-1 lead before blowing it open with seven runs in the seventh inning and pulling away to win it 12-1. The ‘Cats scored one in the first, two in the second and three in third to take an early lead in game two and held on to win it 9-0 and complete the sweep.

Hunter Persall crossed the plate on a fielder’s choice to make it 1-0 West Point in the bottom of the first, but Cullman had an answer in the second inning. Dylon Wallace scored on a bunt single from Easton Dean to tie the game and an RBI single from Peyton Colvard gave the ‘Cats a 2-1 lead in the top of the third.

Ben Hollis drove a ball to deep center field to score a run and make it 4-1 in the fifth and Brennon Norton brought a run home with a sacrifice fly in the top of the sixth before Cullman blew it open in the final frame.

A bases-loaded walk made it 6-1 for the Bearcats and a bases-clearing double down the first baseline from Niklas Fondren put Cullman on top 9-1 in the top of the seventh. Cooper Beck singled up the middle to stretch the lead to 10-1 and Brady Patterson capped things off by doubling into the left-center gap to score two more and make it a 12-1 game.

Wallace made his way back out to the mound for the final three outs and finished off his complete game effort for the ‘Cats. Wallace allowed just one run on four hits and collected five strikeouts in the win. Fondren was 2-for-4 at the plate with three RBIs and Patterson (two hits), Hollis (one hit) and Dean (one hit) each drove in a pair of runs as well. Rylan Jones led the Warriors at the plate with two hits in the loss.

The Bearcats scored on an error to make it 1-0 in the top of the first, but they continued to build their lead in the first few innings. Niklas Fondren scored on a fielder’s choice to go up 2-0 in the second and an RBI single from Cooper Beck stretched the lead to 3-0.

The ‘Cats scored on another error in the top of the third and an RBI double from Ben Hollis along with a Cole Fuller sacrifice fly made it a 6-0 game going into the bottom of the third.

After a pair of scoreless innings, Beck came home to score and put Cullman up 7-0 and in the top of the seventh, Cooper Beck doubled to bring around Fondren and Beck brought Dean home with a sacrifice fly to make it a 9-0 game. Carter Guest picked up the final three outs on the mound for the Bearcats and they completed the Friday sweep with a 9-0 win.

Blake Lambert got the start and the win on the mound for Cullman. Lambert tossed four innings and allowed no runs on six hits while striking out three. Beck led the way at the plate, going 3-for-5 with two RBIs and Hayden Stancil finished with a pair of hits in the win as well.

The Bearcats are now 12-10 on the season with a game against Boaz coming up Saturday Morning and the Warriors (10-14) will try to bounce back and get the bats going when they travel to Hamilton for an area matchup on Tuesday.