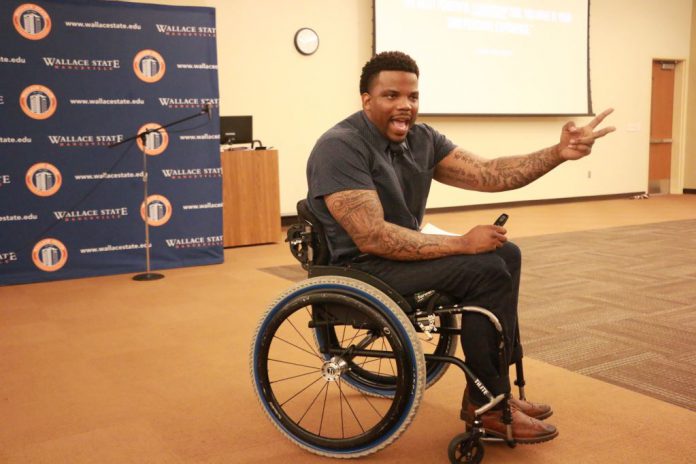 HANCEVILLE, Ala. – Timothy Alexander began his story at Wallace State and continues to inspire individuals every day.

While attending the former Erwin High School in Birmingham, Alexander was a highly-regarded football prospect and eager to pursue his dreams of playing in the NFL one day.

During his senior year, however, Alexander was involved in a car accident that paralyzed him from the neck down and confined him to a wheelchair.

Even though Alexander’s football dreams were dashed, he pursued alternate ways to make a difference in the lives of others.

“In an instant I went from being the talk of the town because I was a star athlete to the talk of the town because the doctors said I would never walk or talk again. This all happened when I was 17. As you can imagine, it left me extremely depressed. I couldn’t do anything on my own. I couldn’t walk and couldn’t talk on my own. Other people had to wipe my mouth. The dreams I had of playing in the NFL were gone,” Alexander said. “One day my doctor told me depression would kill me quicker than this injury if I didn’t get my mind right. That’s when everything changed. My body was paralyzed from the neck down, but my mind was not.

“I’m here to tell you we are product of what we believe. I found hope through adversity. True character isn’t what you see when the lights are on, it’s what you see when the lights are off. When I was at my lowest, I found a way to build myself back up. The gap between the successful and unsuccessful is the thinking gap. You can change the way you think. We are a product of our beliefs. That’s why our attitude does affect our aptitude.”

In Birmingham, Alexander earned a student job in the athletic ticket office, using the position to get closer to the football program. Alexander’s plan was successful. He became the first paraplegic to earn a Division I football scholarship and has soared within Blazers’ program ever since.

After UAB athletics decided to discontinue its football program in late 2014, Alexander was one of the top student ambassadors behind the efforts to reestablish the program. Once Blazers’ football was back in September 2017, Alexander stood up from  his wheelchair and delivered the football to midfield, capping a memorable day in which he was also featured on ESPN’s College GameDay.

“Through all of this, I wouldn’t be where I am today without Wallace State. It was the Wallace State of Mind slogan when I was in school here and now it’s Discover Your Story. Wallace State helped me discover my story,” Alexander said. “When I was called to come speak to you, it about put tears in my eyes. Wallace State believed in me and Student Support Services believed in me. I had to have a note taker. I had to have people come take me to class. I wasn’t the smartest person in the room, but I was in the room. I came to class every day and sat in the front row. It was important to me to show up. I believed."

He not only found his place on campus, but he got involved and became a student leader.

Alexander emphasized multiple times how monumental it was for him to graduate from the Wallace State dean’s list and have the associate degree in his back pocket as he further pursued his education. He ultimately earned a bachelor’s degree in communication management from UAB.

All because he believed.

“We’re all dealing with problems. Some are bigger than others. I was a low point after the wreck, but it was at Wallace State that I found who Timothy Alexander was. I began to fill my mind on things that I knew I could do. I didn’t focus on my weaknesses, I focused on my strengths. I got involved and found myself working on a college (marketing) campaign and found my face on a billboard,” Alexander said. “Never be afraid to close your eyes and dream. One person with a belief overrides thousands of individuals with intent. Discover yourself and follow your state of mind.”

Each school participating in TRIO Day was also welcomed to campus by Wallace State President Dr. Vicki Karolewics and treated to a performance from the Wallace State Singers.