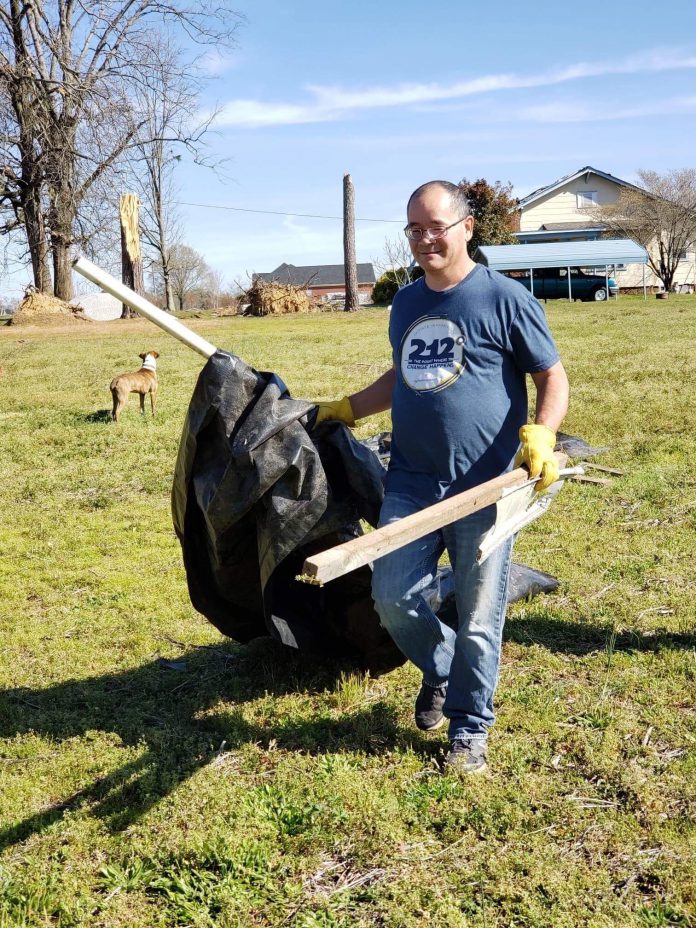 Steve Neer of Near and Far Connections helps clean up a property in White City. (Courtesy of Kathy McLeroy)

WHITE CITY, Ala. – After a tornado touched down in White City on March 14, affected residents leaned on the kindness of others to help them through those first tough days. What they might not have known is that Steve and Julie Neer had recently moved to Alabama to be in better position to help after such disasters. Near and Far Connections is the nonprofit created by the couple to offer a helping hand to the ongoing needs of those affected by disasters.

Steve Neer has been working throughout the White City community to help with cleanup. That’s where he met Randy and Kathy McLeroy, whose home was damaged substantially by the tornado. The Neers’ journey prior to coming to the McLeroys’ could be considered a true godsend.

Near and Far Connections began with a vision.

Steve Neer explained, “What brought us down was about 14 years ago, my wife and I had been working at a church; we had this vision of just going and renovating an RV and doing kids ministry outside of the walls of the church. It took a backseat for a while. Then, in October 2016, we were feeling this strain that we should be doing something different. We walked into our pastor’s office. I was doing middle school and my wife was doing elementary kids ministry at church. We said that we really feel God is telling us to go find an RV, renovate and move somewhere south closer to where we can help people when there’s a hurricane or tornadoes. It was just a big step of faith.”

The Neers stepped down from their positions at the church at the end of the 2017 school year. That October they took the leap and purchased the RV. That same night, the couple received a $500 donation from someone wanting to help with the mission to help children. Other offers came to help house the RV during its renovations. Things were really falling into place. Steve Neer, who works in sales for a veterinarian supplier, learned of the company opening an office in Birmingham.

In June 2018, the Neers left their family and friends in Fort Wayne, Indiana and found a house in Hayden. Shortly after the move, Hurricane Florence slammed the Carolinas and Hurricane Michael devastated the Florida panhandle. The Neers visited the Carolinas and made multiple trips to Florida to help.

When the tornadoes hit Lee County this month, friends began asking Steve Neer if he planned to visit Beauregard.

He said, “My wife’s mother is battling cancer and undergoing chemo so Julie has been traveling back and forth to Indiana. I wanted to wait until she could go down with me. Then the tornado hit the White City community. A friend messaged to see if I was OK, and I thought, oh that’s way north of us.”

New to the area, Steve Neer wasn’t aware of just how close he was from White City. When he saw it was just a few miles away, he reached out to Hanceville Mayor Kenneth Nail to ask how to help.

Steve Neer spoke of his second trip to help the McLeroys, saying, “Everybody’s there on the scene at first. It’s the weeks or even months afterward when the depression sets in. People feel abandoned and that nobody cares anymore. We know there is a deeper need than the physical. There is also the emotional and spiritual. If we can find an organization or church in the area we can connect them to, hopefully that can help ease the burden in their life. Near and Far Connections, our mission is to help connect people to God.”

He continued, “I told Kathy, I gotta clean the porch up because the porch is where you can feel like that’s home. A safe place. I got that cleaned out. We got a lot done, but there’s more to do that I’m not qualified for like roofing and foundation work.”

Steve Neer was stunned by the damage caused, including seeing parts of chicken houses strewn for yards and yards throughout pastures and trees. He even came across a stray donkey displaced as fencing was destroyed.

Kathy McLeroy said she is appreciative to everyone who came to help after the tornado caused extensive damage to her home.

She said, “What is amazing with Steve is he had a way of having a calming effect on everyone helping. Just a natural person you want around during a crisis.”

Plans for the future

With a third grandchild due this year, the Neers said they do miss their family but plan on staying in Alabama.

Steve Neer said, “When God tells you to do it, you just do it. You can’t go wrong with that. I look at it like this: we can have forever in heaven with them. If God has something for you here, you just do it, and when you do, the blessings come.

What began as a puppet ministry 25 years ago led the Neers to Alabama. They hope to take their RV to low-income areas to bring their ministry to them while also using it to travel into areas hit by disasters.

Steve Neer smiled, “Sometimes I feel like Noah. If Noah had waited until it started raining to build the Ark, it wouldn’t have worked out too well. He took a leap of faith. I did, too. I made it. Here I am. God supplies.”

For more information on Near and Far Connections, visit www.facebook.com/nearandfarconnections/.