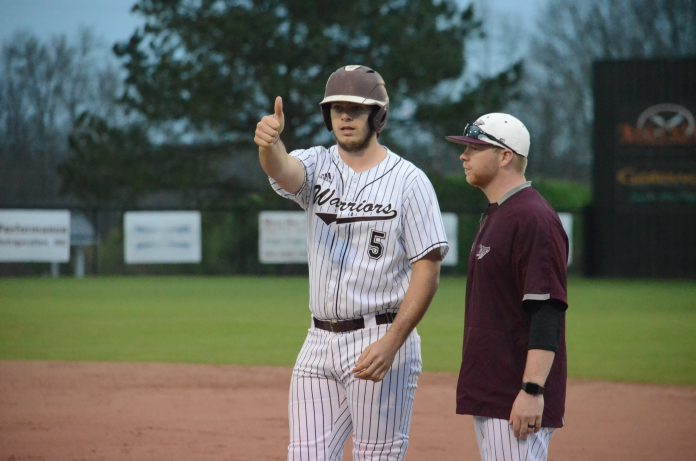 WEST POINT, Ala. – The Springville Tigers made the trip to West Point Wednesday night for a matchup with the Warriors and neither team could decide things in seven innings. The Warriors were able to bring home the winning run in the bottom of the eighth inning to pick up a big, 3-2 win on their home field.

West Point took an early 2-0 lead in the bottom of the first when a double from Rylan Jones brought Will Cochran and Hunter Persall home to score but the Tigers were able to tie cut into the lead with a run in the second.

After a few scoreless innings, Springville tied things up at 2 in the top of the fifth with an RBI single. Both defenses made quick work of the sixth and seventh innings and went into the eight still knotted at 2. Aubrey Cleghorn started the game on the hill for the Warriors and tossed seven innings, allowing just two runs on eight hits and collecting six strikeouts but it was Persall that took the mound for the top of the eighth inning.

The Tigers got two runners on base quickly but one of them was caught stealing home and Persall struck out a Springville batter to send the game into the bottom half of the inning still tied at 2.

Whitt Laney reached first base on a dropped third strike and he was able to move around into scoring position. Cochran came to the plate and knocked one into right field, but the Tigers’ right fielder couldn’t handle the play and Laney came home to score and seal the 3-2 win for West Point in walk-off fashion.

The Warriors posted just five hits in the win led by Jones who finished 3-for-3 at the plate with two RBIs. Persall and Cleghorn collected hits for West Point as well.

The Warriors will look to stay in the win column when they travel to Hueytown on Saturday.

After three scoreless innings, the Eagles managed to bring 10 runs across the plate in the fourth and fifth innings to send the Bulldogs home early with a 10-0 loss. Clay Rogers tossed all five-shutout innings for Vinemont, allowing just two hits and collecting seven strikeouts in the win. Austin Riddle racked up a team-high three RBIs, followed by Issac Smith who went 1-for-3 at the plate with two RBIs. Rogers (one hit), Travis Hopper (one hit), Dalton Whitehead (one hit) and Colby Miller (one hit) each drove in a run for the Eagles as well.

After falling behind 3-0 in the top of the first, the Lady Raiders plated seven runs in the second inning to take the lead for good and they pulled away to win it 15-7 at home. Sidnie English racked up three RBIs in the win for Good Hope and Bailey Swann finished just behind with two RBIs after going 3-for-4 at the plate.

The game was knotted at 2 after the first inning but the Lady Tigers put up six runs in the third, fourth and fifth innings to pull away and knock off Addison 8-6. Emma Fincher led the way for Meek at the plate, going 3-for-4 with an RBI and Abby Phillips (two RBIs) and Bailee Fincher finished just behind her with two hits each. Madison Aderholt went 3-for-3 with two RBIs for the Lady Bulldogs in the loss.

The Lady Patriots put this one away early after jumping out to a 3-0 advantage in the opening frame and pulled away to knock off the Lady Broncos 11-1. Taylor Simmons, Lexy Smith, Madyson Rickman and Maddie Heatherly each collected a hit for Holly Pond in the loss.