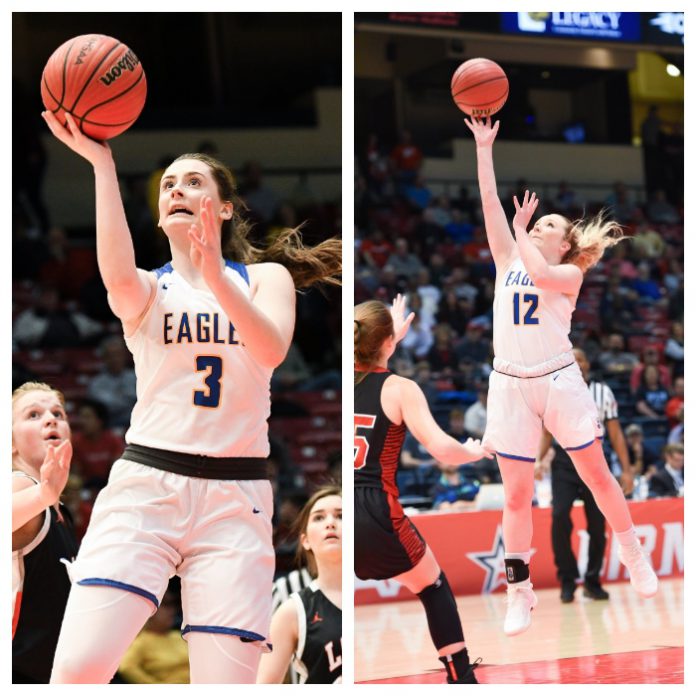 Cold Springs' Elizabeth Hill (left) and Camryn Crider (right) both finished as finalists for the 2A Girls Player of the Year and Miss Basketball after phenomenal seasons. (Photos by Martha Needham for The Cullman Tribune)

MONTGOMERY, Ala. – Cold Springs' Camryn Crider and Elizabeth Hill both put together huge seasons for the Lady Eagles and they've already racked up a plethora of awards thus far, including first-team spots on the All-State team. Now they are heading to Montgomery as two of the three finalists for this year’s Miss Basketball award and the 2A Girls Player of the Year award.

Crider and Hill earned a pair of spots at the annual basketball awards banquet at the downtown Renaissance Hotel in Montgomery on March 26th and will join their fellow finalists for this year’s State Player of the Year and Mr. and Miss Basketball awards.

Crider finished out her Cold Springs career in style by breaking the state record for most 3-pointers in a season, finishing with 157, tying the state record by making 13 treys in a single game and now holds the state record for most 3-pointers in a single quarter. Crider knocked down seven in the first quarter of Cold Springs' 84-20 rout of Southeasten in January. She was also honored with the Bill Shelton Award at this year’s county tournament along with a place on the All-County team. Crider ended this season with 2,002 career points and was selected to both the Northwest Regional and 2A State All-Tournament teams.

Hill battled through some injuries to have a great season as well, collecting All-County honors along with being named to the Northwest Regional All-Tournament team and the 2A State All-Tournament team. Hill earned MVP honors in both the Northwest Regional Tournament and Class 2A State Tournament. She finished her junior season with one of her best performances of the year, posting 30 points, 10 rebounds, five assists, four steals and four blocks in the Lady Eagles' 57-53 win over Fyffe in the Class 2A state championship game, claiming their first title since 2009. Hill was also selected to participate in this year’s North-South All-Star Basketball Game in July.