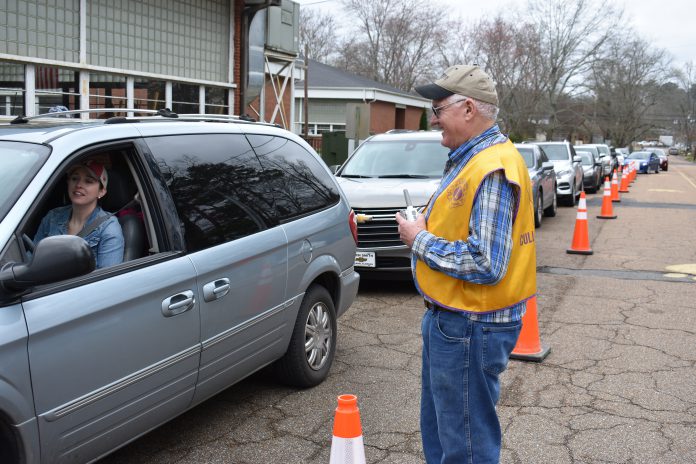 Lion Charlie Powell calls in orders as take-out diners line up in the drive-through lane outside Cullman Middle School’s lunchroom during the Cullman Lions Club Fish and Ham Dinner Saturday. (W.C. Mann for The Cullman Tribune)

CULLMAN, Ala. – Rain and bad weather didn’t dampen spirits Saturday at the annual Cullman Lions Club Fish and Ham Dinner at Cullman Middle School.  The outdoor cooking area was moved onto a covered walkway, and the fun went on as planned. By noon, the sky was heavily overcast, but the drive-through pickup line stretched down the street and the cafeteria was filling up with folks who had come out to eat a good meal and support the Lions’ charitable causes.  At 5 p.m., despite rain and storms moving in, the Lions were still handing out plates and carry-out orders to a steady stream of diners.

Around lunchtime, Lion Frank Odell, the event coordinator for this year’s dinner, told The Tribune, “It hasn’t hurt us a bit yet, and we’ve got our safety committee kind of watching the radar. We’ve got plans in place in case it gets bad later on.

“We’re excited about it.  I think that a lot of people that maybe would come in for dinner are going to come in at lunchtime and get their meal, and then they’ll be ready if there’s any unfortunate weather later on in the day.”

Odell went on to comment on the experience of putting on the annual event:

“We’re real excited about the Fish and Ham (Dinner).  This function’s been going on for about 50 years, every year.  And I used to think it was strictly a fundraiser. We only charge $10 a meal as a donation, and catfish is expensive now.  But I’ve realized that we raise money for local organizations; we also celebrate Lionism and the fact that we serve where we’re serving the community.  The people that choose to eat in, those are a lot of our supporters. We enjoy having them here.

“We have a very good meal at a reasonable price, so we’re helping out people with that.  Some of the Lions donate their tickets for some specifics like, in many years we’ve donated meals to people at Childhaven.

“But then it’s also a team-building exercise where we’re all under the same roof for a whole day, working in different teams, working together to get as much fish and as much ham produced for the customers as they come in, and try to do a better job every year.  I’s always worked out quite well.”

The Lions, Lionesses and high school Leos began prep work on Friday, then got ready to serve up to 1,500 meals on Saturday.  A team worked in the outdoor cooking area, frying up fish and hushpuppies, while volunteers inside baked potatoes, made slaw, poured drinks, fixed plates and packed carry-out orders.  Lionesses covered a line of tables with desserts, while Leos ferried carry-outs to the drive-through line outside.

The funds raised by the event goes to local charitable projects.

Odell shared, “There’s any number of things that we contribute to during the year.  We haven’t ever actually just said it’s going to go for this particular project, but all the projects we do, this goes and helps to fund those.”

The money raised by Lions Club events like the Cullman County Fair and this dinner will mainly benefit eyesight-related causes like providing eye exams and glasses to needy patients, along with other eye services through the UAB Callahan Eye Hospital and the Alabama Lions Eye Clinic located at that hospital.  The club will also support numerous other local causes, as well. Over just the last few years, Cullman Lions have contributed to:

For more information on the Cullman Lions, Lionesses, or Leos, visit www.cullmanlions.com.