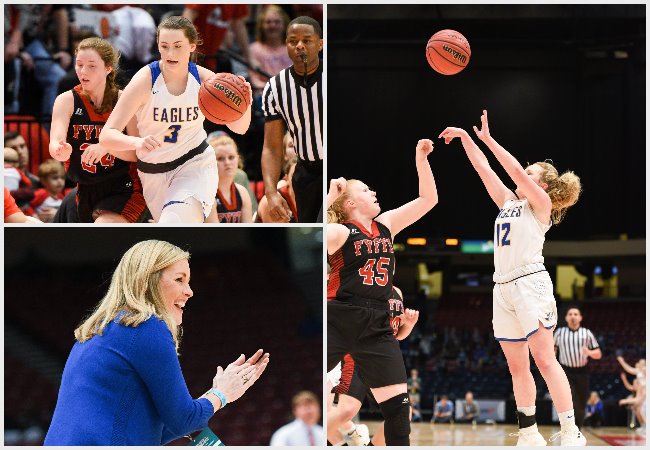 Cold Springs' Camryn Crider and Elizabeth Hill earned first team All-State honors with their performances last season and Lady Eagles' Head Coach Tammy West was named as the 2A Coach of the Year. (Photos by Martha Needham for The Cullman Tribune)

CULLMAN, Ala. – The 2018-2019 basketball season is officially in the books and the boys' and girls' All-State teams were released by the Alabama Sports Writers Association Prep Committee and the Alabama Independent School Association last night. Three Lady Eagles from Cold Springs received some huge recognition as Camryn Crider and Elizabeth Hill each collected first-team honors while coach Tammy West was named the 2A Coach of the Year. Five other players got some big recognition as well as Good Hope's Cole Maddox and Holly Pond's Kyler Chaney picked up second-team honors, Hanceville's Kelly Pickett and West Point's Miriam Oldacre were selected to the third-team and Cullman's Anna Katherine Eastman received an honorable mention.

This season was one to remember for Cold Springs. The Lady Eagles won the Class 2A area championship, along with winning their sub-region game and taking regionals. The Lady Eagles advanced to the Final Four at Birmingham, where they defeated G.W. Long (52-36) and Fyffe (57-53 OT) to capture the Class 2A state championship, their first since 2009, and finished the season with a 28-6 record.

Crider capped off her career in style, setting a state record with 157 treys during the season, and she finished with 2,002 points. Crider was also named to this year’s All-County, Northwest Regional and Class 2A State All-Tournament squads and tied the state record with 13 made 3-pointers in one game against Cleveland.

Hill battled through some injuries to have a fantastic season as well. She was the MVP of not only the Northwest Regional, but also the state tournament. She saved the best for last in the Class 2A state title game against Fyffe, finishing with 30 points, 10 rebounds, five assists, four steals and four blocks. Hill also earned a spot on this year’s North-South All Star Basketball Game roster last week.

Coach West led the Lady Eagles to win this year’s Class 2A state championship, their first since 2009, and her fourth overall. She has a career record of 617-203 in her time at Cold Springs and was selected as one of the coaches for the upcoming North-South All-Star Basketball Game last week.

Maddox had an amazing junior campaign at Good Hope, earning All-County and All-Area honors while helping lead the Raiders to a 23-6 regular season record. He helped the Raiders win their first Cullman County championship since 2010 and he also eclipsed the 1,000-point mark during the season.

Chaney really upped his game in his junior season at Holly Pond. He was named to the All-County and All-Area teams. He helped his team win the Class 3A, Area 13 championship, and the Broncos advanced to regionals as well. Holly Pond finished with a 15-16 record on the season.

Pickett's junior season at Hanceville was nothing short of amazing as she helped lead the Lady Bulldogs to a 14-11 record and earned spots on the All-County and All-Area teams. She also reached the 1,000-point mark early in the season and in one game against Red Bay, she went off for 47 points, a career-high.

Oldacre broke out in her junior season at West Point, helping the Lady Warriors capture their first county championship since 2006 and the Class 5A, Area 14 title. West Point also advanced to the Northwest Regional for the first time since 2006 and finished the season with a stellar 27-6 mark. Oldacre was also named to this year’s All-County team.

Eastman was of one of the Lady Bearcats' biggest leaders on the floor in her junior campaign at Cullman. She now holds the state record after making 42 consecutive free throws this season and helped the Lady Bearcats finish with a 23-10 record, their first season in several years with more than 20 wins.