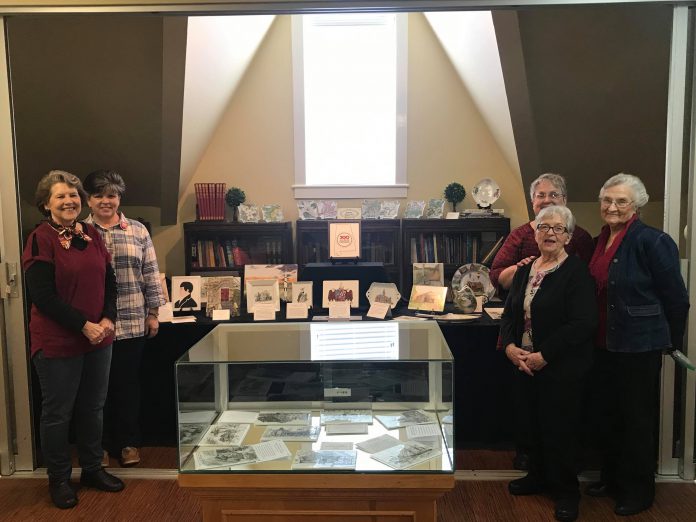 CULLMAN, Ala. – A new exhibit featuring the work of the Decatur Porcelain Artists (DPA) opened Tuesday at the Cullman County Museum. The display showcases a vast array of porcelain items with images celebrating Alabama’s Bicentennial. The exhibit will be on display for two months.

DPA will hold an open house at the museum on March 23 from noon until 2 p.m. Members will be demonstrating their art, giving people of all ages a chance to come learn about porcelain art. Four different stations will be set up to demonstrate different painting techniques.

Founded in 2010 by Anna Marie Skonieczny and Dixie Anderson, DPA will celebrate the nonprofit’s 10th anniversary next year. The group is made up of more than 15 artists from throughout north Alabama who meet each month at the Decatur Public Library. Many of the members teach painting classes in their communities, and the group donates some of its hand-painted porcelain items to charities and fundraisers.

Historic buildings and landmarks, wildlife, flora and other things unique to Alabama are painted on the exhibit pieces. The display also includes gorgeous Delft artwork by Dixie Anderson.

Several of the lovely and talented women from DPA were at the museum Monday to help set up their artwork.

Said Skonieczny, “Most of the historic places and things like the rocket and state seal were done specifically for the Bicentennial exhibit. Some of the other pieces were done before.”

The group explained that the paintings, done with pen and china paints, take a long time to complete. Selling the pieces is not something they often do because the prices often don’t cover the investment of time and expense put into their work. Instead, they give pieces as gifts to family and friends.

Skonieczny explained, “George Benson, who is from Cullman, was with us for years, and he is in a nursing home now. He really wanted a painting of Weiss Cottage. I painted it for the exhibit and for him.”

The group’s porcelain exhibit was recently on display at the Decatur Train Depot for two months. Due to its popularity, DPA has been asked to return next year for four months when Decatur celebrates its bicentennial. The artwork will be shown until April 29, 2019 at the Cullman County Museum.