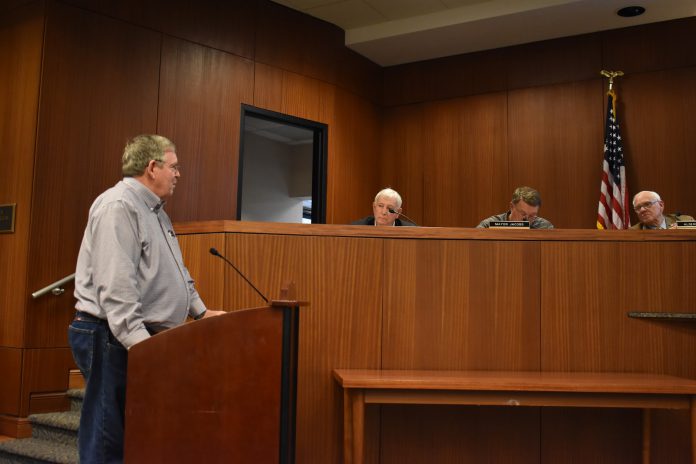 Cullman resident Dan Miller, who also owns a farm near the proposed new site of Rock the South, came to voice his opposition to the relocation of the event at Monday night’s Cullman City Council meeting. (W.C. Mann for The Cullman Tribune)

CULLMAN, Ala. –  Cullman Mayor Woody Jacobs, during Monday night’s Cullman City Council meeting, took a moment to express sympathy for the victims of Sunday’s tornadoes in Lee County and other areas, reading a statement:

“On behalf of the city council, myself and the citizens of Cullman, I’d like to express our thoughts and prayers for the people of Lee County, Alabama and other areas affected by this weekend’s devastating tornadoes.  Our hearts go out to the families of those who lost their lives, as well as to everyone whose homes or businesses were destroyed or damaged. Our thoughts and prayers also go out to the emergency personnel and others sent (for) rescue, relief and recovery efforts.

“The City of Cullman stands ready to help.  We’ve gone through this; we all experienced it, and it’s just hard to imagine what happened in just such a brief span of time yesterday afternoon.”

The council passed a resolution to purchase a small parcel of land adjacent to Art Park on Main Avenue Southwest.  Cullman Parks, Recreation, and Sports Tourism Executive Director Nathan Anderson said the plot will likely be used to expand parking at the park.

Anderson also took a moment to address the council about the renovation project:

“We’re very excited about this.  This is unlike any other park that we’ve renovated lately.  We appreciate the support. What’s really been interesting is we’ve experienced a lot of great support from businesses and individuals, and even our foundation board for this project.

“We thought that we were just going to be able to get the site grading completed, the sidewalks-because the street department’s helping and your support.  We knew we were going to get the playground in, but now we’re able to build a deck because Lowe’s is donating the lumber. We’re able to do a small-scale amphitheater because the foundation board has declared that as their project this year for Dinner on First fundraising, and I think we can cover the cost of that in a fundraising event.

“And then there’s just some other things like a bathroom; we really need a bathroom onsite.  Spoke to the artist recently that we’re commissioning our first art piece with, and it looks like August is his date to complete the sculpture, so we’ll have our first art piece and some really cool RGB lighting in the park.  So we’re really excited about the project.”

For more on this project, see www.cullmantribune.com/articles/2017/04/15/huge-day-cpr-art-park-festival-sees-city-park-renamed-art-park.

In other business, the council approved the following requests:

The council also approved the following resolutions (from the agenda):

The Cullman City Council usually meets on the second and fourth Monday evenings of each month at 7 p.m. in the Cullman City Hall auditorium.  The public is invited to attend.