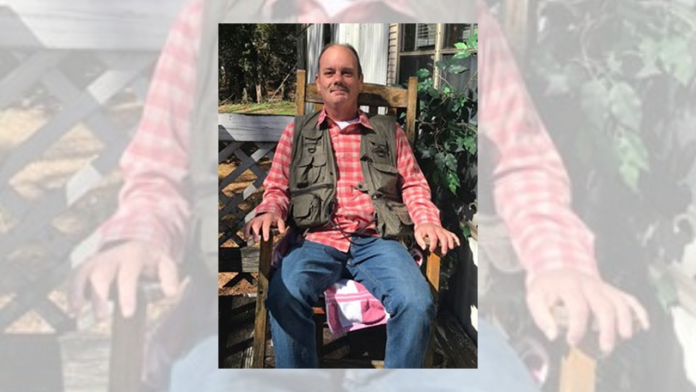 Jimmy Reeves has a left ventricular assist device (LVAD). The external components of the LVAD are kept in a vest that Reeves must wear at all times. (Christy Perry for The Cullman Tribune)

VINEMONT, Ala. – When Jimmy Reeves said when he received his left ventricular assist device (LVAD) last November, he saw hope of regaining a life of normalcy. However, he said, now he is struggling with a new obstacle due to strangers and their lack of awareness of the life-saving equipment. The external components of the LVAD are kept in a vest that Reeves must wear at all times. Reeves said that in the last two months, he has been approached or surrounded by police three times due to others mistakenly believing the vest is possibly holding a bomb. The last incident happened Saturday at the Five Below store in Cullman.

Reeves has a family history of heart disease. He said his father and his father’s nine brothers all passed away due to heart disease and none of them lived past 65 years of age. Reeves had his first heart attack when he was just 34. At age 40, he underwent a triple bypass after another serious attack. On July 14,  2018, he suffered another major heart attack and family and friends prepared for the worst.

At just 52 years old, Reeves’ heart was functioning at no more than 15 percent. With the wait for a heart transplant being much longer than he could handle, he received the LVAD on Nov. 11 after having another life-threatening episode on Halloween. Reeves stayed at UAB Hospital from Halloween until mid-December. During this time, his daughter Shyanne Sparks and close family friends, Jessica Jackson and Gail Phillips were trained extensively and certified on how the LVAD works. One of them is required to be with Reeves at all times.

According to UAB Hospital, “an LVAD is a mechanical heart pump used for patients who have reached end-stage congestive heart failure. Once the LVAD is surgically implanted, the battery-operated, mechanical pump helps the circulating function of the left ventricle — the main pumping chamber of the heart — pump blood to the rest of the body.”

Sparks explained that the LVAD is a “bridge therapy that is for people who are waiting to become eligible for the transplant list. The apparatus is heavy and the vest helps keep the weight evenly distributed.”

Reeves and his family and friends are worried about many things regarding the upkeep and cost of the equipment. They say the equipment is costing the family more than $300,000 by itself and Reeves’ insurance is not helping with the cost. Reeves said he is focused on getting better and making sure nothing happens to the numerous wires and lines keeping him alive. If one particular line that is connected to him were to become unattached, he said, he could die within seconds.

Reeves said he is learning to cope with his new LVAD and the stresses and limitations associated with it. Recently, as he has finally recovered enough to get out and about with his family, Reeves said he has discovered his greatest fear is the reception he has received when going out. The family wants desperately to make people aware of what the LVAD is and the dangers Reeves faces when people misinterpret the vest as being a bomb.

Said Sparks, “It makes him feel pretty bad. It cuts him down and he cries afterward. I can’t get him out of his room afterward. To go from almost dead to this being placed to help him get back to his normal routine and his life. Now, he can’t even go out in public because people want to call the cops on him.”

Reeves is frustrated, saying, “People say things like they heard it ticking! It doesn’t make a noise or tick.”

Reeves demonstrated the only noise the device makes is a tone that indicates a low battery.

He added, “We go off, just doing everyday things, and I get surrounded by cops.”

The family acknowledged that the Cullman Police Department is aware of what the vest is and they know Reeves now.

Said Reeves, “Cullman police have been really nice and they apologize to me when it’s happened, but the stores who call them never have. It’s happened to me in Decatur, too, and those cops don’t know who I am.”

He continued, “All the sacrifices these girls have made- I feel bad. It’s rough and it’s gotten to me. I feel like I embarrass them when we go out somewhere.”

Jackson tried to reassure him, saying, “We aren’t embarrassed or sad. It makes us mad. It’s common-sense. Why would we be walking around, laughing and cutting up with someone with a bomb in his vest?”

Reeves, Sparks and Jackson all acknowledge that people just need to be made aware, and that’s what the hope to achieve by sharing their story.

Reeves said, “Stores have a responsibility to keep their customers safe, but they need to understand that that includes me. I want people to see this and know what it is just like they would when they see someone with oxygen or other medical needs. I don’t want to live life looking over my shoulder.”

Reeves and his friends and family do have a sense of humor about this entire experience.

Sparks laughed, “When dad’s getting on my nerves, I threaten to take his portable battery and put him on the wall charger. The cord is only a couple of feet and would keep him put.”

They also point out that Reeves is unique in that he doesn’t have a pulse. The LVAD keeps the blood flowing but there is no detective rhythm.

The family said UAB Hospital told Reeves that several LVAD recipients live in Cullman and that a local support group exists, but the family has yet to find the group. Right now, family and friends are his support group. They have established a code in case there is an emergency. They call it “Code Papi.” Jackson’s daughter Navaeh and Reeves’ grandchildren affectionately refer to him as Papi.

Reeves said he is grateful to everyone for the help he has received during his struggles, sharing, “The things everybody’s done- how do you repay back somebody? I say thank you, but it still makes me feel bad. Everybody means a lot and has done a lot for me. I can’t pay them back with anything other than being alive.”

Reeves said he hopes to one day return to the wrecker business. He had a repair shop and wrecker service prior to his illness. He loved dirt track racing, but the doctors have ruled out a return to that. With his oxygen levels improving, Reeves was proud to report his hair getting thicker again, although Sparks teased that the sides are just thinner thus creating an illusion. The close-knit group said it will continue to joke around and make tough sacrifices to help keep Reeves healthy. They will also advance awareness of the LVAD to improve not only Reeves’ quality of life, but the quality of life for all people with the equipment.

Friends and family have donation jars at Warehouse Discount Groceries, O’Reilly Auto Parts and the Busy Bee Cafe to help with medical expenses, medications and gas money to get Reeves to Birmingham three to four times a week.