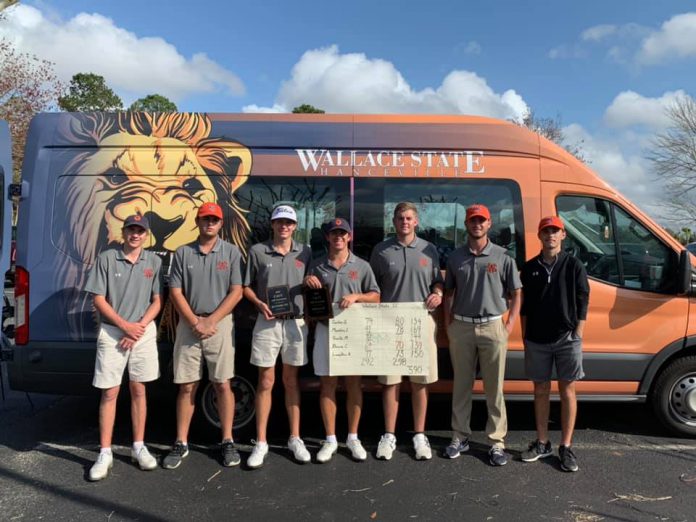 Wallace State's Men's Golf Team carded a 14-over 590 overall, opening the event with a 292 on Friday and closing with a 293 on Saturday. (Photo courtesy of Russell Moore)

HANCEVILLE, ALA. — Wallace State sophomore Connor Bruce won individual medalist honors at the Coastal Alabama Invitational over the weekend, and the Lions finished as the tournament runner-up in a playoff.

Bruce, a Mortimer Jordan graduate, finished with a 5-under par 139 (69-70) at Rock Creek Golf Club in Fairhope, notching his first collegiate individual championship.

Wallace State, playing in its second tournament of the season, finished runner-up as a group after Mississippi Gulf Coast outlasted the Lions in a two-hole playoff. Wallace State carded a 14-over 590 overall, opening the event with a 292 on Friday and closing with a 293 on Saturday. Calhoun finished third.

Cody Maddox rounded out the field for Wallace State.

Wallace State’s next tournament is at Point Mallard in Decatur, beginning on March 3.

Southern Union led 26-24 at the end of the first quarter. Wallace State surged in the second quarter, sustaining a 46-35 advantage by the half. The Lady Lions held a 59-56 edge heading into the fourth.

Wallace State’s women have already secured the second seed in the ACCC North for next month’s conference tournament.

Meanwhile, Wallace State’s men (23-5, 11-1) are two wins away from winning the ACCC North regular-season title after a convincing win against the Bison.

Sophomore Mike Johnson scored a game-high 18 points for Wallace State, and Markise Davis had 17 points and five rebounds off the bench.

Chris Rollins added nine points off the bench for the Lions and Max Clark had seven points.

The Lady Lions are idle until Feb. 25.