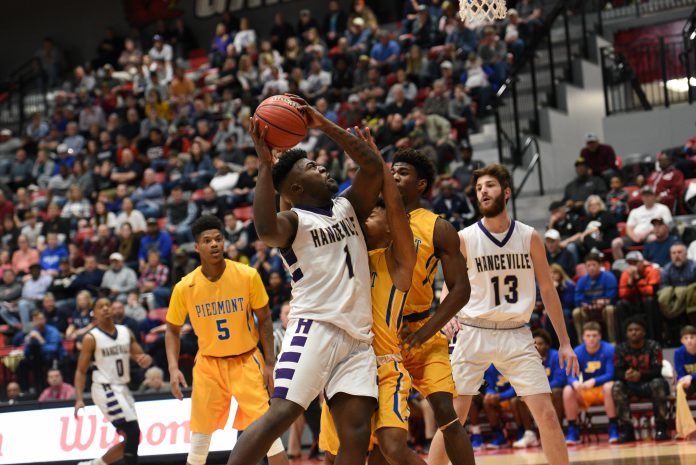 Hanceville's R.J. Evans (1) drives past a Piedmont defender during the Bulldogs' 59-48 loss Monday night. (Martha Needham for The Cullman Tribune)

JACKSONVILLE, Ala. – Hanceville traveled to Pete Matthews Coliseum for the Northeast Regional Tournament Monday afternoon to take on Piedmont, and the Hanceville Bulldogs’ season came to a close with a 59-48 loss.

The Bulldogs got off to a 6-0 start early in the game but an 8-0 run from Piedmont gave the opposing Bulldogs a lead midway through the first. The run continued for Piedmont, and back-to-back 3-point shots gave it a 16-6 lead late in the period, but Hanceville was able to trim the lead all the way down to 16-14 by the start of the second quarter.

Piedmont stretched the lead to 21-14 early in the second but a basket from R.J. Evans and a three from Tyson Bellmon tied the game at 23 midway through the quarter. Piedmont got back in front, but a 3-pointer from Fred Ellis tied the game back up at 29 with a minute remaining in the half. The Bulldogs trailed Piedmont 30-29 at the break.

A three from Raiden Morgan put Hanceville in front 32-30 at the start of the third but Piedmont re-took a 35-32 lead midway through the period. The Piedmont Bulldogs stretched the lead to 39-32 later in the quarter, but another three from Morgan made it a 39-35 game with just over a minute remaining in the third.

Piedmont went into the final frame with a 41-35 advantage and stretched it to 44-35 after the first possession of the second half. A three from Bellmon cut the lead to 46-40 midway through the quarter, but the Hanceville Bulldogs couldn’t get any closer than that. Piedmont went 6 for 6 from the free-throw line in the final two minutes to pull away and eliminate Hanceville from postseason contention, 59-48.

Morgan led the Bulldogs with 18 points in the loss, followed by Ellis with 11 and Evans with nine. This was the second straight trip to regionals for this team and a group of seniors that will leave behind big shoes to fill next season. Two of those seniors, Evans and Ellis, talked about what their time playing basketball for Hanceville has meant to them.

Another great basketball season closes at 23-7 for the Hanceville Bulldogs, and with a big core of seniors graduating in May, there will be a lot of chances for new faces to step up for Hanceville next season.