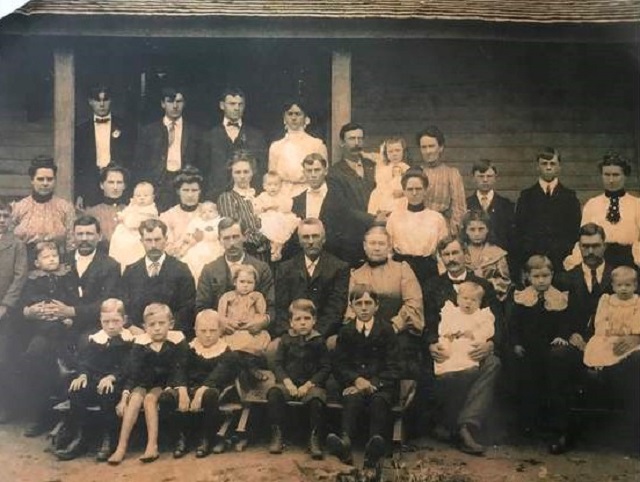 In 1938, when Ruth Harris married Hanley Duke, the Great Depression was coming to an end as World War II would shortly begin.

Hanley’s Grandpa Duke had moved the family from Winston County to Welti. Ruth recalled Grandpa Duke joking about the move, saying, “Someone said to him, ‘Uncle Buck, you move over there and some of your children will marry Germans!’ He said, ‘I’d about as soon some of them marry Germans than to keep marrying Thrashers!’” He was referring to the fact that three of his children had married Thrashers.

Hanley and Ruth moved a few times before building their own home. They spent three years living with her grandma and three years in Stonebridge. When they moved in with Ruth’s grandma, they did not have electricity.

Said Ruth, “I don’t think we had electricity anywhere until 1936. I think that’s the biggest change that I’ve ever seen in my lifetime.”

Ruth said, “People said to us, ‘Why didn’t you tie on to TVA? You get more than twice as much for your money.’ Hanley would say, ‘Well, we just got an iron and a radio.’”

Hanley and Ruth agreed to pay 75 cents toward the electric bill with grandma giving the other 25 cents.

Ruth continued, “People would say to us, ‘You might want a stove or a refrigerator.’ Hanley would say, ‘No, I’ll never live to see the day that we can afford to have all that.’ But we did!”

Hanley was not drafted into World War II as he was a young father at that time and a farmer. However, Hanley’s brother, Wallace, died while fighting in Holland.

Ruth explained, “He died when a plane landed on their plane. He was buried in Holland then moved to another location before being sent home in 1948. He is buried at home in Berlin now.”

A monument still exists in Holland honoring the airmen who died protecting a village. The family receives letters each year from families in Holland in appreciation of the sacrifices made by the airmen to protect them during the war.

Hanley and Ruth built their house in Welti in 1959 and made a living farming. They raised cows and hogs and planted row crops. Everything was done by hand or by mule for many years.

Ruth said, “My oldest son was nearly grown before we ever had a tractor. We done it the hard way.”

As time went on, the Dukes did get that refrigerator and stove. Ruth was especially fond of receiving her first washing machine from Montgomery Ward. She had just brought water in and heated it on the cook stove to wash clothes when the machine arrived.

She said, “When they brought it home, they had to show me how to work it. Before we would have to bring in water to heat or in the summer, we would put it outside to heat up. The refrigerator and freezer might be my favorite invention though.”

Hanley and Ruth raised four children and worked very hard. Hanley had a sister who lived in Connecticut so they did travel to see her from time to time. They would drive up the east coast making stops along the way. They visited Washington D.C. and stopped at the Jersey Shore. When Ruth’s sister-in-law died, Ruth flew to Connecticut.

She said, “I hadn’t ever been on a jet plane until then, but I enjoyed it.” The Dukes also visited Florida, but she said, “I’m just not much of a traveler.”

Church was and still is a central part of Ruth’s life.  She is a member of Mt. Zion Church and has attended there her entire life. The music and singing have always been her favorite part of church.

As Ruth’s mama got older, she began needing help with her quilting. Ruth began helping her mother and has been quilting ever since. She started by just quilting during the winter months when there was less work to be done outside. Now she quilts year-round and it became something she and her sister Millie loved to do together.

Ruth and Millie made 50 quilts in a year once. Millie would come to Ruth’s house and sleep over for a couple of days so the two could quilt together. Millie passed away in January 2017 at the age of 97.

Ruth continues to quilt and said, “I meet people and don’t even know them, but they’d find out who I was and they’d say ‘Oh, you quilted my quilt.”

When asked if any of her quilts had been entered into the Cullman County Fair, she quickly said with a laugh, “Not by me! I think someone else I’ve quilted for might have entered their quilts into the fair.”

When Ruth was 100 years old, she was having difficulty breathing. Her doctors determined she would need a surgery to fix her heart valve. They worried about the risks at her age, but she went ahead with the surgery. The procedure fixed the leaking valve without open heart surgery. Ruth spent three nights in the hospital in Birmingham.

She said, “I came home and never had a problem. I went straight to my chair and sat down and was fine.”

Good health and longevity seem to run in Ruth’s family. Her mom passed away just shy of 103 and several of her siblings lived well into their 90s. She gives credit to several things: Church, lots of walking, physical work and homegrown food.

Her best advice is, “Be content with what you got-not worry! I think that gives you upset stomach when you worry about things. I’ve always tried to take things as they come and make the best of it. I’ve never had much, but it didn’t worry me. I had plenty to eat and stayed warm. I didn’t always stay cool. I hadn’t been cool until the last few years since I got air conditioning. Just be content. We all have lots to be thankful for.”

Ruth is the matriarch of five generations of Dukes. Besides her four children, she has 10 grandchildren, more than 20 great grandchildren and three great-great grandchildren whom she admits to spoiling. She enjoys quilting and crocheting. She recently taught herself how to crochet cute stuffed animals for the kids. She enjoys getting up early and watching the morning traffic, but is not a fan of any programs on the television. Her favorite things are the visits from family and Mt. Zion Church.