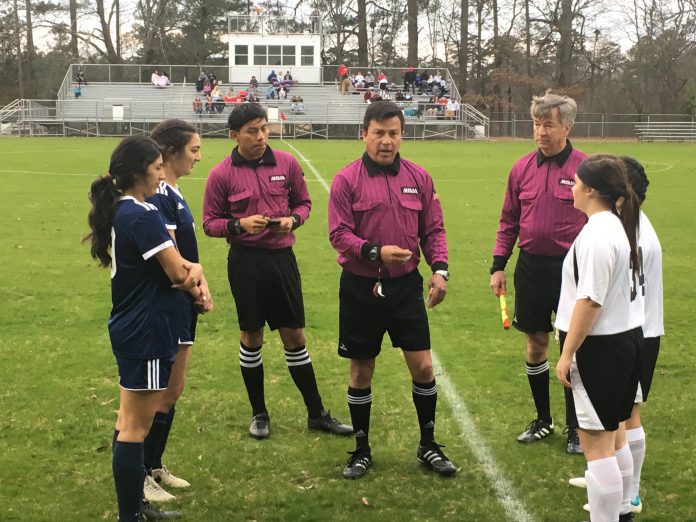 CULLMAN – For the first time since 1999, it's soccer season at Good Hope High School. The Raiders and Lady Raiders traveled to St. Bernard Thursday night for their first games of the new season and split their matchups against the Saints. The Raiders were able to hold onto a late lead for a 2-1 victory over St. Bernard and the Lady Saints handled the Lady Raiders 10-0 in the first match of the evening.

There wasn’t much drama to be found in this opening showdown but there was history made. Good Hope fielded the first exclusively women’s soccer team in school history and their coach, Adriana Skutchan, was proud of the way her team competed. The final result wasn’t what they wanted but coach is excited to continue helping her players and watch them develop throughout the season.

“What encouraged me is that they didn’t get intimidated going out there,” Skutchan said. “For almost all of the girls, this was their very first soccer match and they went on the field, took it in stride and gave it 110%. So, that’s encouraging for me because I know from this point on all I can do is build off of that and they have that desire, so it’ll help us grow from here.”

Watson added another goal in the 19th minute to go up 4-0 and a goal from Amelia Tafazoli made it 5-0 just 10 minutes later. Rachel Agnello put one in the back of the net off a great pass from Watson and the Lady Saints went into the half with a 6-0 lead. St. Bernard pulled away to win it 10-0 in the second half with two more goals from Gallegos and Tafazoli and two goals off the foot of Jaya Bahadursingh.

Neither squad was able to find the back of the net in the first half, but it wasn’t for lack of opportunities. The Raiders were able to create a lot of good looks at the goal early in the game but couldn’t capitalize on any of them and both teams went into the half scoreless.

Good Hope was able to take a lead early in the second half when Andres Aguilar scored in the 44th minute to take a 1-0 lead and Aguilar wasn’t done. The junior striker added another goal just two minutes later to make it a 2-0 game and the pressure shifted to the defense after that.

John Rose was able to break free and score in the 52nd minute for the Saints to cut the lead to 2-1 and St. Bernard had a lot of shot opportunities to tie the game, but the Raiders were able to hold on defensively and secure their first win of the season, 2-1.

After the game, Coach Damian Rodriguez was happy with the way the team came out to play and is excited to keep working and improving with this group going forward.

“The main thing is we’re a new team and we didn’t really have anything to lose, you know. We just went out there and played as hard as we could,” Rodriguez said. “All the effort they put into it, they never gave up. They were determined to win this game and didn’t let up on defense. The defense did a great job and I was really proud of them on that. We got good looks and took a good number of shots as well and I’m just really proud of them.”

St. Bernard will try to rebound with a win Thursday when they host J.B. Pennington and Good Hope will look to keep things rolling in the right direction when they travel to West Point on Tuesday.