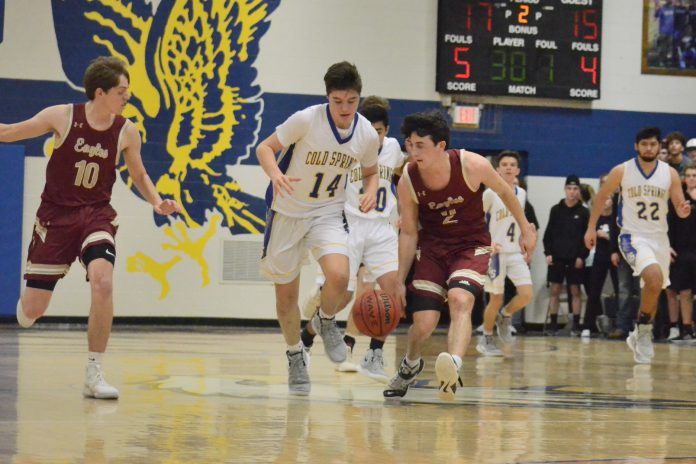 BREMEN – After more than doubling their win total from a year ago, the season came to an end for the Cold Springs Eagles Tuesday night with a 55-49 loss to Sumiton Christian. The Eagles always seemed to be within one or two possessions of taking the lead in the second half but just couldn’t get enough shots to fall. Missed free throws and turnovers plagued Cold Springs throughout the night, but its strength on the offensive glass kept them in striking distance.

A 3-pointer from Landyn Freeman gave the Eagles an early 6-0 lead but Sumiton Christian was able to tie the game at eight later in the first. Adam Hill laid one in at the buzzer to give Cold Springs a 15-13 advantage at the start of the second quarter, but the Eagles couldn’t maintain the lead for long.

A 10-2 run put Sumiton Christian ahead 23-17 midway through the second, but the Eagles were able to trim the lead to 25-22 before the half.

A basket from Landyn Freeman cut the lead to 27-26 early in the third quarter and Hill knocked down two free throws to make it a 29-28 game later in the period, but Sumiton Christian was able to finish the quarter strong. A three-point shot at the buzzer put Sumiton Christian on top 39-33 at the start of the fourth quarter.

A 3-pointer from Freeman cut the lead to 39-36 at the start of the fourth and the Eagles trailed Sumiton Christian 47-43 midway through the final period. A pair of free throws from Freeman trimmed the lead to 49-46 with just under two minutes to play but Cold Springs couldn’t draw any closer than that, and Sumiton Christian held on to win it 55-49.

Freeman led the Eagles with 18 points in the loss, followed by Hill with 13 points, Brody Peppers with eight, Logan Rice with six and Mason Harris with four. The season came to an end at 17-10 for Cold Springs and only a few seniors will be leaving this spring, but there will be a lot of production to replace on the floor for the Eagles next season.

The Broncos came from behind to knock off Lamar County in a shootout Tuesday night and secure their spot in the Northwest Regional. Holly Pond trailed 48-40 at the half and were still down by six going into the fourth quarter, but a late scoring surge from the Broncos propelled them to a dramatic victory. Holly Pond will try to ride this wave of the momentum at Wallace State Saturday at 7:30 when they take on Westminster Christian Academy.

The Bulldogs trailed Midfield at the end of the first quarter, went into the half down 34-31 and trailed at the start of the fourth quarter, but they were still able to find a way to win and punch their ticket to this year’s Northeast Regional. Hanceville outscored the Patriots 23-14 in the final frame to pull away and will try to keep the ball rolling when the Bulldogs take on Piedmont Monday at Jacksonville State at 4:30.