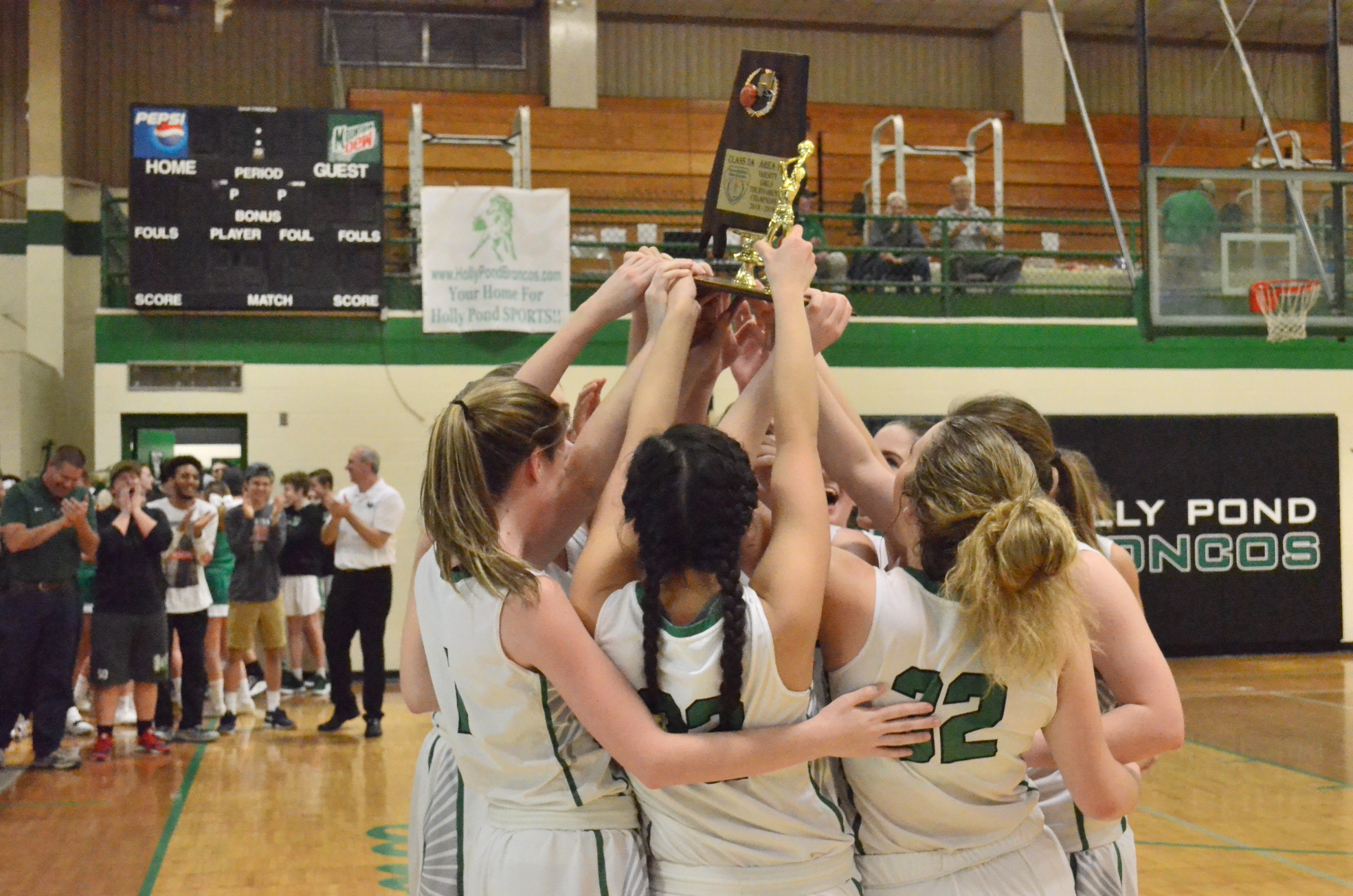 HOLLY POND – Both Holly Pond varsity squads took home some hardware Thursday night after a pair of area championship game victories over the New Hope Indians. The Lady Broncos overcame a slow start to defeat the Lady Indians 42-30 and the Broncos put together big runs in the second and third quarter to knock off New Hope 69-48.

The Lady Indians jumped out to a 7-2 lead midway through the opening period, but the Lady Broncos were able to chip away at the lead before the start of the second. A free throw from Sarah Finley tied the game at 10 at the end of the first quarter but New Hope was able to regain a 20-14 lead midway through the second. Elizabeth Miller got a shot to fall at the halftime buzzer to trim the Lady Indians lead to 24-19 at the break.

New Hope continued to hold Holly Pond in check offensively and maintained a 30-24 lead midway through the third quarter, but a three-pointer from Kara Hollis tied the game back up at 30 just before the start of the fourth.

From that point on, the Lady Broncos took over. They shut out the Lady Indians in the final period and pulled away to win the game, and the Area 13 title, 42-30. Miller led Holly Pond with eight points, followed by Maddie Heatherly and Kirsten Campbell who each scored six. Tess Duke, Hollis and Finley finished just behind them with five points each.

The Lady Broncos’ season continues, and they’ll be back in action Monday night when they host Carbon Hill for a spot in this year’s Regional Tournament.

The game was tied at five early in the opening period but back to back three-pointer from Brody Rowell put the Broncos in front 11-5 midway through the first. The Indians were able to trim the lead to 16-13 by the start of the second quarter but a big scoring gave Holly Pond a commanding lead at the break.

A three-pointer from Jordan Allbright put the Broncos ahead 25-18 midway through the second and the run was capped off by a buzzer-beating layup from Parker Sellers that made it a 40-24 game at the half. Holly Pond outscored New Hope 24-11 in the second quarter.

The Broncos continued to add to their lead in the third, opening the quarter on a 6-0 run. A basket from Kyler Chaney midway through the period made it a 50-28 game and Holly Pond carried a 54-34 advantage into the fourth. The Indians cut the lead to 54-39 early in the period but it was too little too late and the Broncos pulled away to win it comfortably, 69-48.

Cooper Jones led Holly Pond with 16 points in the win, followed by Chaney with 12, Devyn Tankersley with 11, Allbright with 10 and Rowell with nine.

The Broncos’ postseason run is now underway, and they’ll be back on the court Tuesday night at 7 p.m. when they host Lamar County for a chance to advance to regionals.

Hanceville cruised past Susan Moore 73-49 Thursday night to punch their ticket to the Area 12 title game. The Bulldogs will be back on the court Friday night at 6 p.m. to take on JB Pennington with a chance to host a sub-regional game next week on the line.

The Fairview Lady Aggies fell just short against Oneonta 40-37 Thursday night and they’ll have to travel for their sub-regional matchup Monday night. Fairview will play at North Jackson Monday night at 7 p.m. with a chance to advance to regionals on the line.

West Point dominated Hamilton 88-40 to secure the Area 14 title Thursday night and as a result, they’ll be hosting a sub-regional game Monday night. The Lady Warriors will host East Limestone at 7 p.m. for a chance to move on to regionals.