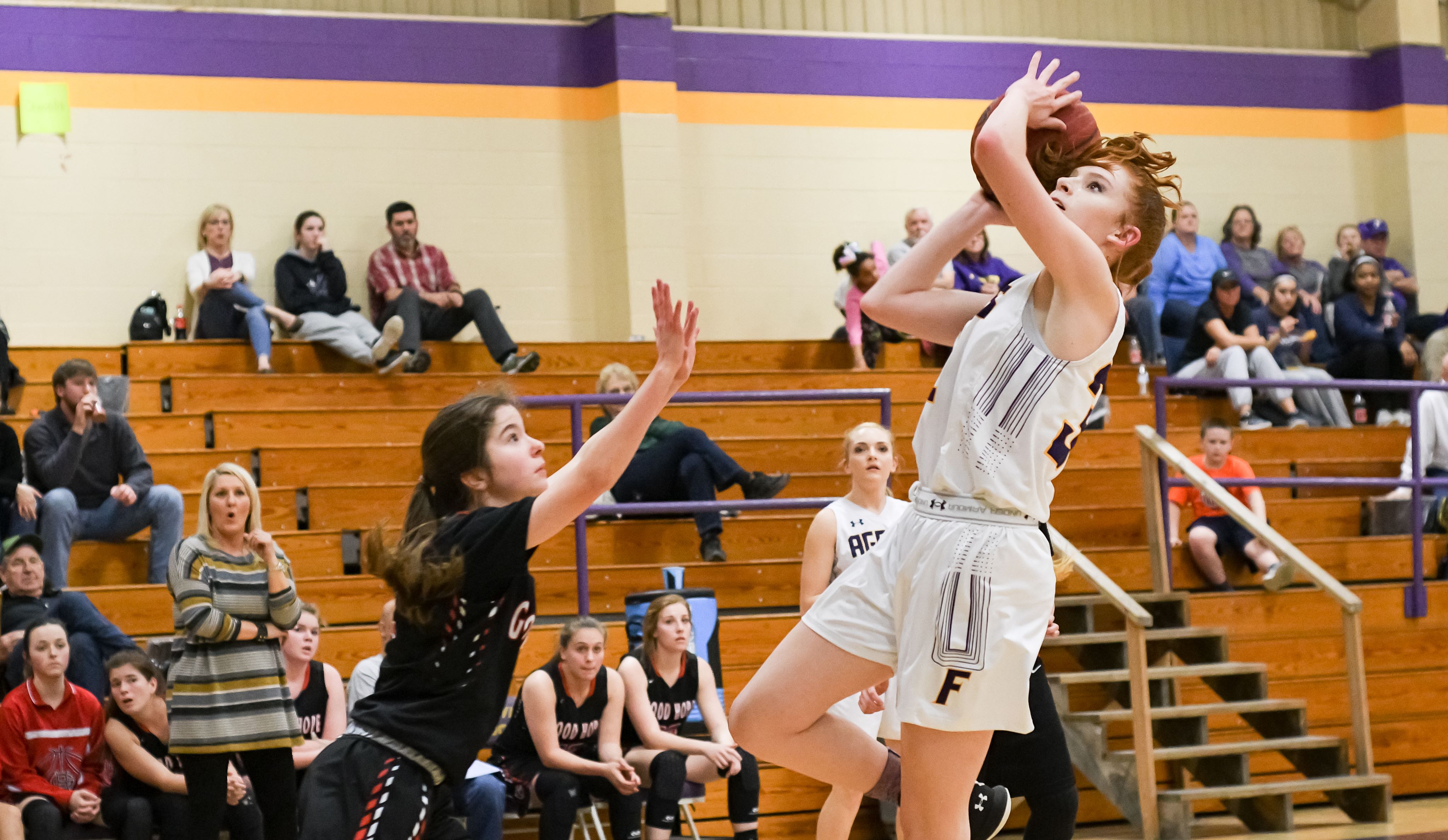 FAIRVIEW – The Lady Aggies hosted Good Hope Monday night in their opening round matchup of the Class 4A, Area 12 Tournament and Fairview eliminated the Lady Raiders with a 72-45 victory.

Both teams turned the ball over early in the first quarter but a 3-pointer from Molly McKelvy gave the Lady Aggies a 10-4 lead midway through the opening period. Fairview held on to a 17-7 lead at the end of the first and another three from McKelvy made it 20-7 early in the second.

Good Hope was able to trim the lead to 27-20 later in the quarter after a basket from Abby Neighbors, but the Lady Aggies still maintained a 33-27 lead at the halftime break.

Fairview got off to a fast start in the second half and a layup from Payton Golden made it a 40-28 game midway through the third quarter. The Lady Aggies were able to create turnovers and separation between them and the Lady Raiders late in the third and held a 51-33 advantage going into the fourth.

Back-to-back baskets from Jacy Gorham put Fairview ahead 57-33 early in the fourth quarter, and a layup from Morgan Lindsay made it a 64-38 game midway through the final period. Good Hope was able to get to the free-throw line late in the game, but it was too little too late and the Lady Aggies pulled away to win it 72-45.

McKelvy led Fairview with 20 points in the win, followed by Lindsay and Maddie Yeager with nine and Gorham and Isabella McGukin, who each finished with eight. Ivey Maddox led the Lady Raiders with 15 points in the loss, followed by Heather Tetro with 10 and Neighbors and Bailey Tetro who each posted seven.

The Lady Aggies will be back in action Friday night at 7 when they play Oneonta for the Area 12 championship. The loss brings an end to the season for Good Hope at 5-18, but the Lady Raiders have a lot of young players returning to the floor next fall.

St. Bernard knocked off Falkville 32-24 in its opening round matchup at Decatur Heritage Monday night, and the Saints advanced to face the home-standing Eagles Tuesday night at 7:30. Meek was also victorious in its Monday night matchup with Lynn, defeating the Bears 49-35 to advance to Thursday’s Area 13 title game. The Tigers will face the winner of Tuesday night’s Decatur Heritage and St. Bernard matchup for the area crown Thursday night at 7:30.

The Lady Saints also traveled to Decatur Heritage for area tournament action Monday but fell just short of advancing past Lynn, 37-32. The tight loss ended St. Bernard’s 2018-19 campaign at 4-18, but the Lady Saints will have virtually the entire roster returning to the court next season.

The Addison Lady Bulldogs knocked off Winston County 53-38 in their Monday night area tournament matchup and advanced to face the top-seeded Lady Patriots of Red Bay. Addison will be back in action Friday night at 6 when they take on Red Bay for the Area 12 crown.

Cold Springs routed its opening-round opponent, Southeastern, 87-37 to punch its ticket to the area championship game on Friday. The Lady Eagles will face the Cleveland Lady Panthers at 5:30 Friday night for the 2A, Area 13 title.