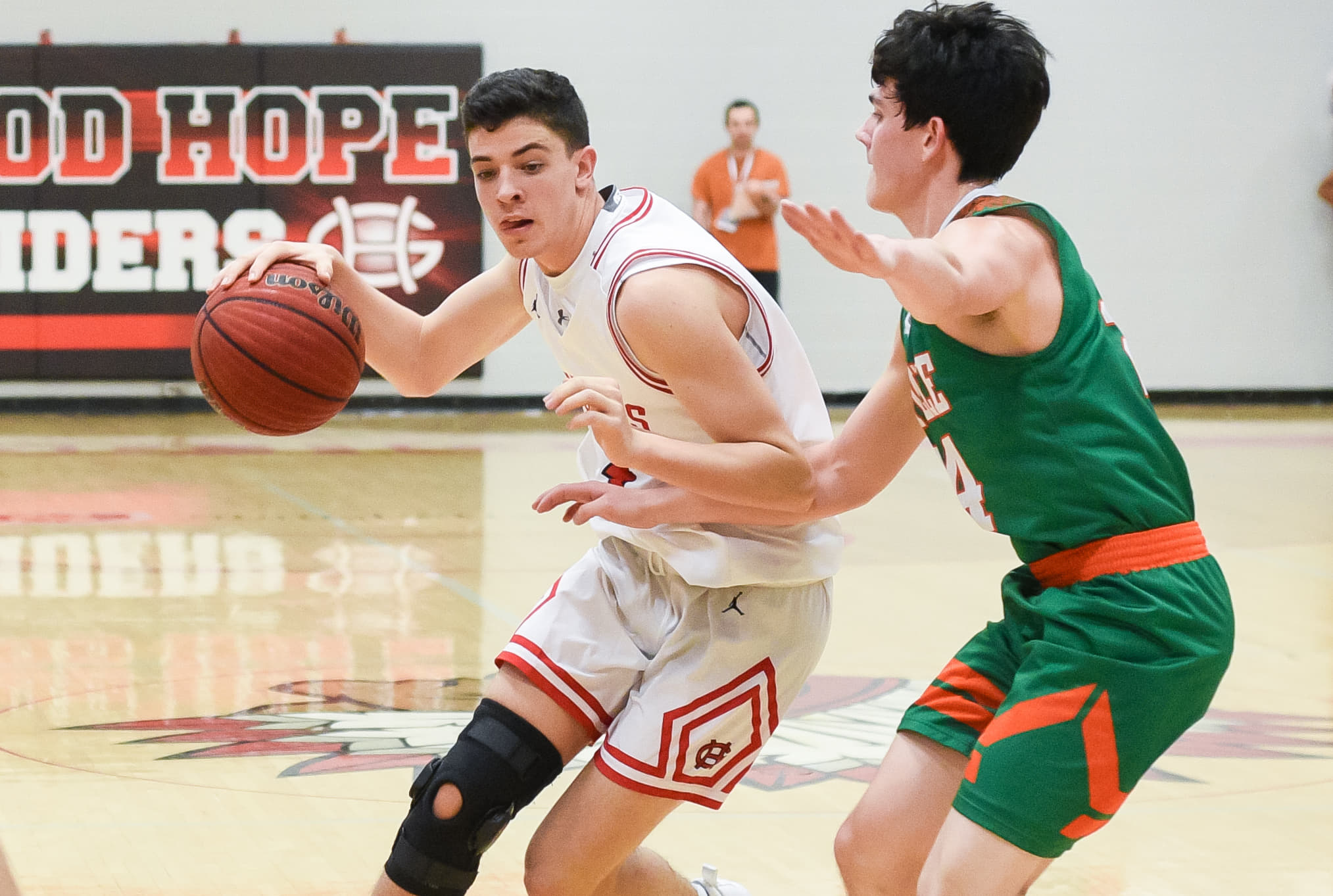 Michael Lowe (4) drives past a defender in Good Hope's 63-56 win over Ashville Friday night. (Martha Needham for The Cullman Tribune)

GOOD HOPE – The Raiders and Lady Raiders hosted the Bulldogs of Ashville for a pair of area matchups Friday night and it was the home teams that came away with both wins. The Lady Raiders knocked off Ashville 50-35 and the Raiders followed them with a 63-56 win over the Bulldogs.

The first half was close between both teams as Good Hope held leads of 11-5 after one and 20-12 at the half, but the third quarter proved to be the difference in the game as the Lady Raiders outscored the Lady Bulldogs 15-5 to take a 35-17 advantage. They pulled away in the fourth quarter to win it 50-35.

All but two Good Hope players scored at least two points in the game, led by Rudi Derrick who finished with nine points. Desire' Odachowski, Heather Tetro, and Ivey Maddox each added eight points. Savanna Derrick ended up with seven points. Cayleigh Garmon added six points. Bailey Tetro and Savanna Burney each chipped in with two points. The Lady Raiders will be the no. 6 seed in the Cullman County Tournament and will take on the no. 3 seed, Hanceville, next Tuesday at 6:15 p.m.

The first quarter was closely contested between both squads, but Good Hope got balanced scoring from four different players. Noah Fendley had six points in the period and Cole Maddox, Drew Maddox and Michael Lowe each added four points to give the Raiders an 18-12 lead after one.

Both teams went back-and-forth for most of the second period, but the Raiders were able to keep their lead. They stretched it late in the period as Fendley nailed a trey and later on, Matt Dixon came up with a loose ball and got fouled attempting a shot from almost half-court before the buzzer sounded. He nailed all three from the charity stripe to make it a 34-25 score at the half.

A three each by Fendley and Drew Maddox made it a double-digit lead at 40-25. The Bulldogs cut the deficit to 10 after a three-point play, but the Raiders went on a 9-3 run to widen their lead to 49-33. Ashville scored the final nine points of the quarter to make it a 49-40 score going into the final period.

The Raiders pushed their lead back to double-digits at 55-42 early in the fourth quarter but the Bulldogs used the three-ball to cut the Good Hope lead to seven at 55-48 and later to six at 59-53. Great defense, a free throw each by Cole Maddox and Drew Maddox, and a late Cole Maddox layup helped seal the 63-54 Raider victory.

Fendley finished the game with 19 points for Good Hope. Cole Maddox added 16 points, Drew Maddox ended up with 10 points, Lowe added eight points and Dixon finished with five points. Dawson Turner chipped in with three and Eli Phares added two more. The Raiders are the no. 1 seed in the Cullman County Tournament and will play the winner of Fairview and Holly Pond next Friday night at 6:15 p.m.