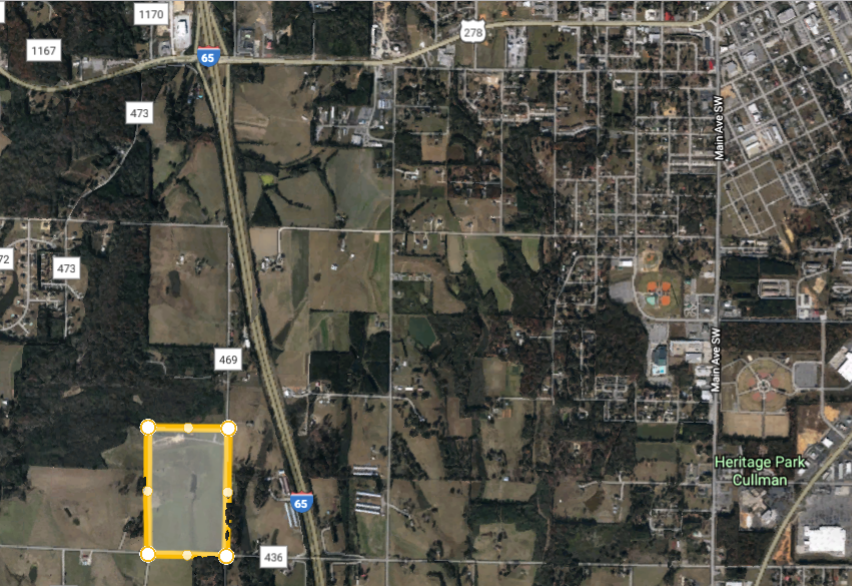 Thanks to a multi-year deal, a 150-acre portion of a City-annexed parcel west of Interstate 65 (southwest corner of map) is the new home of Rock the South.  (Image courtesy Google Earth)

CULLMAN – On Monday morning, Rock the South (RTS) and production company 46 Entertainment announced that the massive music event has found a new and bigger home away from Heritage Park and downtown Cullman, but still “in the neighborhood.”  In an exclusive to The Tribune, 46 Entertainment’s Nathan Baugh said RTS has signed a multi-year lease on a 150-acre parcel about 2 miles from Heritage Park, along County Road 469 and County Road 436 (Swafford Road Southwest), just west of Interstate 65 at 1872 Country Road 469 Cullman. RTS’ previous venue, Cullman’s Heritage Park, property which included substantial portions not used for the festival, totaled only 72 acres, with approximately 15 acres used for the festival.

The new RTS site is outside Cullman proper, but is on private land previously annexed into the City of Cullman.  The property was once considered for the location of a new city industrial park, and, appropriately for the festival which began as a disaster relief fundraiser after the 2011 tornadoes, was used for disposal of debris generated by the storms before the City sold the property to its current owner.

Rock the South, one of country music’s largest music festivals, is announcing it is moving to a new location in Cullman, AL.  With over 140 acres, the new location will allow Rock the South to now offer Camping, RV Camping, on-site parking, expanded food and drink offerings on top of an incredible A-List lineup.

Rock the South is doing substantial infrastructure improvements to the property, including working with multiple outside engineers to develop the property and traffic plan to be ready for 65,000+ people in June.

Baugh told The Tribune Sunday night, “The biggest thing that we’re excited about is, basically, it’s about 10 times the size, and the biggest thing is letting us stretch our legs a little bit and adding more amenities like onsite parking, RV parking and camping in general.  So, it kind of becomes a more true festival experience.

“We’re still staying two days.  We’ve already worked with public safety and all that stuff; they’ve been aware of this for a couple of weeks.  (Cullman) Economic Development’s kind of spearheaded the project for us, and they’ve been great to work with, along with (Rep.) Corey Harbison (R-Good Hope) and some other people.”

While the site could be used occasionally for other events, Baugh said that his company has no current plans to develop the property as a year-round entertainment venue.

Despite the move out of downtown Cullman and away from Heritage Park, Baugh insisted that nothing has changed in the partnership between RTS and the City of Cullman.

“Obviously, there’s some new kinks to be worked out.  And Parks and Rec is not like–we’re not in a Cullman city park, but we’re still working with them through our charity angle to work with them on parking and all that stuff.  They will still be managing parking with us, and all that.

“So, basically, everything’s staying the same, except bigger and 2 miles over.”

Away from downtown, smaller impact

Said Baugh, “Obviously, any time you have a festival–anything of this size–it’s going to have impact to the area around it.  The new area has far less impact than where it was at Heritage, just because it’s not in the downtown corridor. The biggest conglomerate of people is Deer Trace (subdivision), which is about 1,000 yards behind the site.  But we’ve reached out to a couple of the land owners there already and provided contact information in regards to some stuff. And Corey’s working with us with some of the Good Hope side, because it’s Good Hope, basically, till right before the property. We’re going to be a good neighbor, just like we have been at Heritage.”

Baugh and RTS included in their announcement responses to common questions people have asked  about the event in the past, or about locations the organization has considered. Some questions that were addressed in our interview have been omitted here.

What about the traffic?

"For months, we have been working with an engineering firm out of Birmingham, Alabama that specializes in traffic engineering, transportation planning and parking consulting.  They have given approval for this site to be used for Rock the South based on the size of the event and the needs of the event (parking, drainage, wetlands, etc)."

What if it rains?

"We have also been working with a civil engineering firm out of Cullman to develop a master plan for the property.  This plan involves drainage plans, grading, permanent solutions for staging and other high impact areas such as parking lanes and entrances."

Will there be any impact to surrounding neighborhoods?

"While the impact to surrounding areas will be far less than Heritage Park, we do recognize an event of this size will have impact, regardless of its location.  Prior to the announcement, we began to reach out to neighborhoods and residents surrounding the site. Since there (are) a lot of questions about this move, we do believe it is important for residents to have a direct relationship with the festival to work together to address concerns.  We have already started that process and will continue that process until it is complete."

Will you have parking on-site?

"Yes. One of the main selling points was to have parking on-site, including RV parking and VIP Parking."

This year’s lineup to be biggest ever; announcements begin soon

According to Monday morning’s release, “Rock the South will begin announcing its incredible 2019 lineup on Tuesday, Jan. 22, 2019 at 7 a.m.  Visit www.rockthesouth.com for more information.”

While still quiet about names, RTS promises that a larger site is going to mean a larger event.  According to Baugh, the company plans to book 15 acts for this year’s festival. Ticket sales are set to begin on Wednesday, Jan. 23.